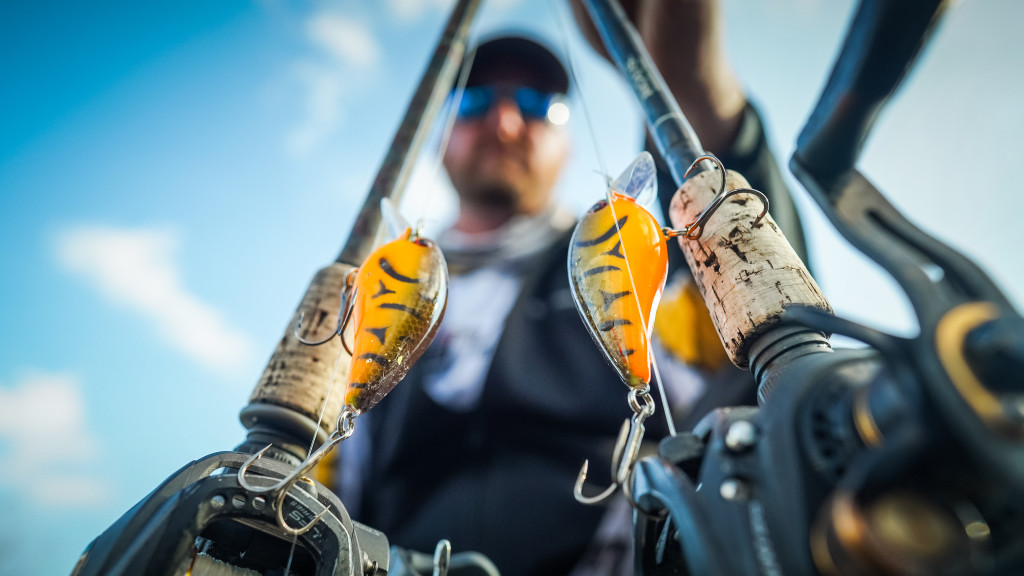 When it comes to Lake Cumberland in the late fall, few things come to mind as clearly as the image of a craw-colored crankbait – specifically, the Storm Wiggle Wart and SPRO RkCrawler – which is a Cumberland staple for a reason. It works.

At the Toyota Series Championship last week, nearly every pro in the field had a craw-colored crankbait on the deck, with a few very notable exceptions. Spinnerbaits and various other reaction baits had their time to shine as well, and winner Chris Malone earned his $247,500 payday with a unique bait utilized in even more unique fashion.

If you’re planning to fish Cumberland any time soon, you’d be unwise to leave your crankbaits at home, but don’t overlook these other offerings that got it done in the Championship. 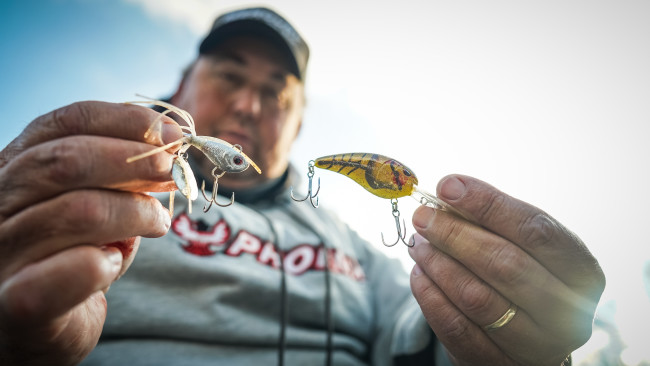 1. Chris Malone took an unconventional approach to catch his winning fish, employing a Bad Boy Baits tail spinner (1/2 ounce) to pitch to main-lake banks, allowing the tail spinner to fall past suspended fish to elicit a reaction bite. Almost all the fish he weighed in came on that tail spinner, though he did catch a few on a SPRO RkCrawler 55. Malone also picked up a Bull Shad for a while on day three after watching his co-angler (winner Matt Greene) catch some big ones on a glide bait of his own. 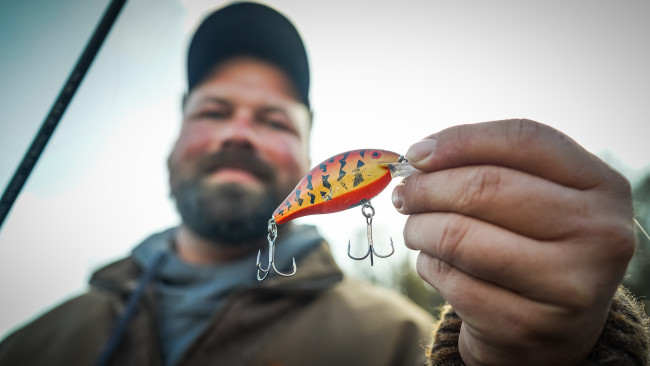 2. Every fish Cameron Lineback caught throughout the tournament came on a crystal crawdad Luhr Jensen Speed Trap, save for one he caught flipping a Zoom Ultra Vibe Speed Craw on day one. Otherwise, he just tied his Speed Trap (modified with No. 4 Gamakatsu wide gap trebles) to 12-pound-test Seaguar InvizX spooled on a Lew’s reel and paired with 7-foot, 6-inch medium-heavy Denali KOVERT Lite cranking rod and went to work. 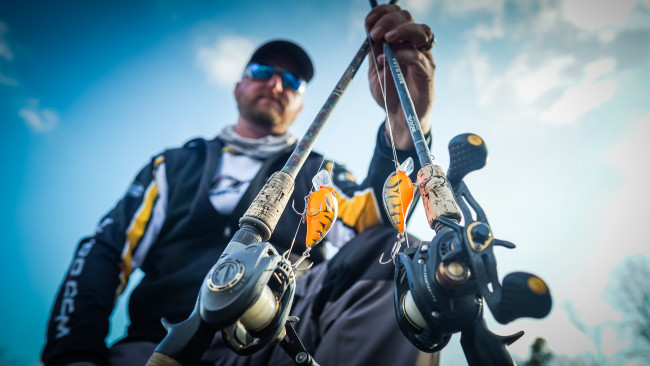 3. Drew Boggs spent all his time with a cranking rod in hand. He used a Lew’s reel with 15-pound-test fluorocarbon to wind a Strike King 1.5 squarebill crankbait in orange belly craw to cover water and catch his fish. 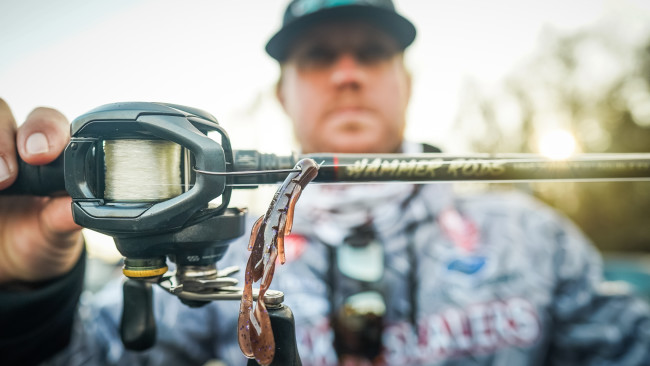 4. Dakota Ebare chose a Carolina rig because he surmised that his fish were eating crawfish. Opting to stick with just the Carolina rig all week, Ebare employed a 7-foot, 11-inch extra-extra-heavy Hammer rod paired with a Shimano reel spooled with 20-pound-test line and a 15-pound-test leader that was 2- to 3-feet long. . He used a 1-ounce weight, a 3/0 Owner Offset Shank Wide Gap Worm Hook and a Zoom Ultra Vibe Speed Craw in the cinnamon purple color. 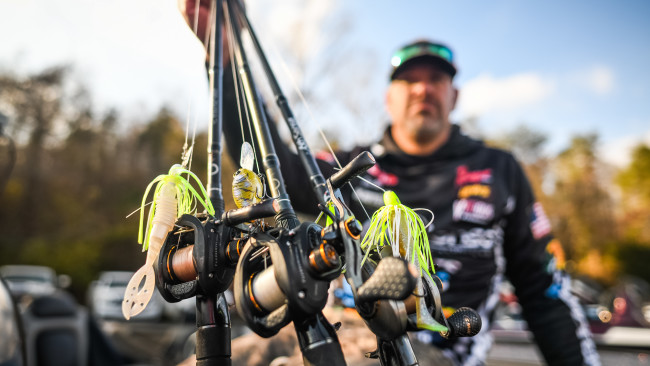 5. Eric Olliverson employed a handful of different reaction baits to tally his 34-15 for the event: a 6th Sense Curve 55 crankbait, a Z-Man/Evergreen ChatterBait Jack Hammer and a pair of spinnerbaits from War Eagle and Trophy Bass Company (3/4- and 1-ounce) tipped with a 6th Sense Divine Swimbait. 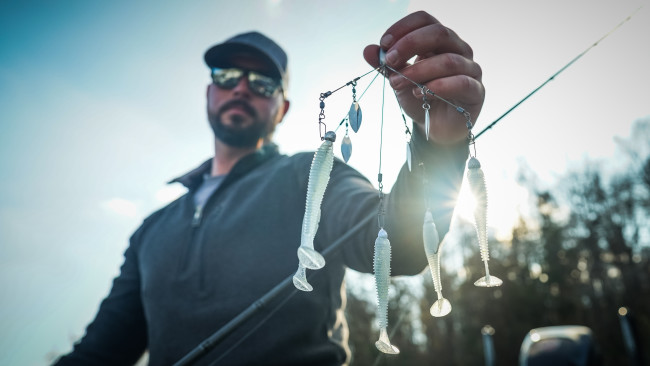 6. Kurt Mitchell’s bait of choice throughout the event was a trio of umbrella rigs featuring a couple different 1/8-ounce swimbait heads (including Strike King Squadron heads), which he threaded with 3.3-inch Keitech Swing Impact FAT swimbaits. He threw that on an Impulse rod with Seaguar fluorocarbon line. 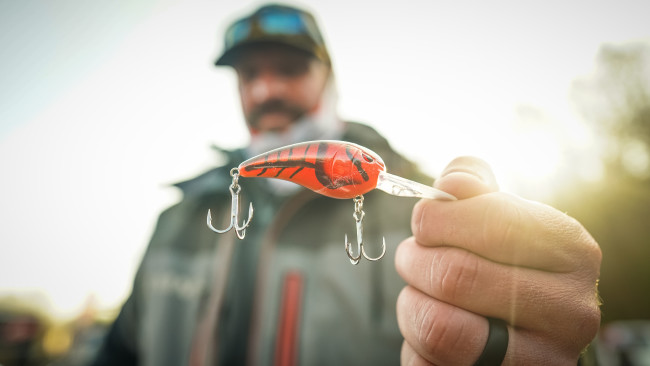 7. Michael Caruso says he “lived and died” by a SPRO RkCrawler 55 in the electric shad color, which he admits is the color he had the most confidence in. He fished his crankbait on a pair of Megabass rods – an Orochi and a Levante – paired with Daiwa reels and 12-pound-test Seaguar fluorocarbon. 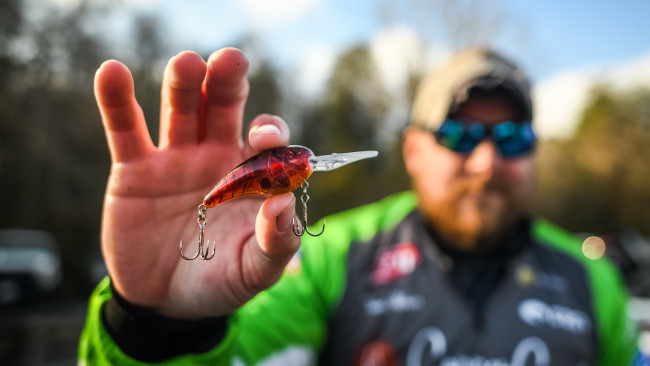 8. Trent Palmer caught 95 percent of his fish on the SPRO RkCrawler 55 in red bug, which he worked especially fast and fished on a 7-foot ALX rod and a 7:1 gear ratio reel. He also caught a couple fish on a Rapala DT 14 in red craw using the same setup. 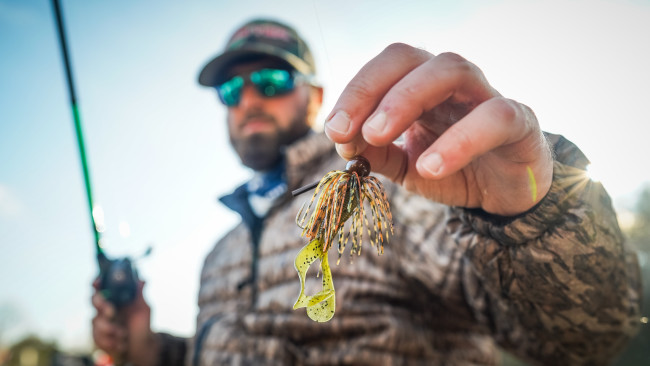 9. Hunter Eubanks did his damage on day two with a 3/4-ounce football jig in a Cumberland craw color, so he began day three with the same bait and vastly different results. Switching to a custom-painted Rapala DT 10, he cranked up one fish for 3-9. Otherwise, he caught the rest of his fish on a BOOYAH One Knocker lipless crankbait, which he threw on a Bass Pro Shops Crankin’ Stick. He fished all of his baits on 15-pound-test Seaguar Red Label fluorocarbon. 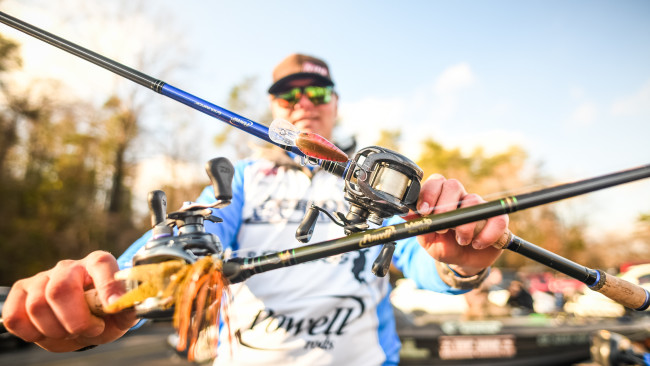 10. The first two days, Andrew Loberg employed a pair of custom-made brown-and-orange jigs (3/8- and 1/2-ounce) with a Zoom Super Chunk trailer, which he fished on Powell rods, Daiwa reels and P-Line fluorocarbon. On day two, though, he was getting fewer and fewer shallow bites, so Loberg switched to a SPRO RkCrawler 55 and Rapala DT10 and leaned on them throughout the final day as well.