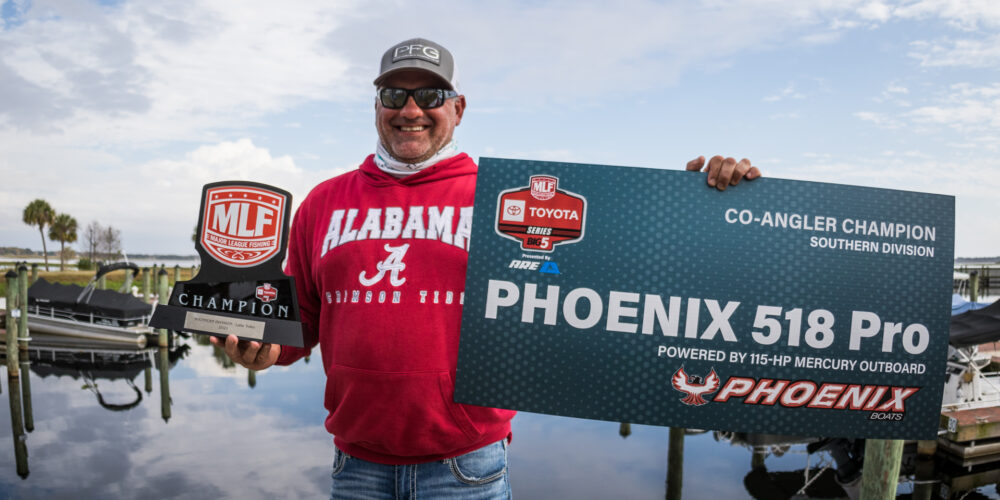 Of the 206 co-anglers who fished the Toyota Series presented by A.R.E. event on Lake Toho, which was presented by Googan Baits, none caught a bigger limit, won a bigger prize, or had a bigger time than Jeffery Baffa of Frankfort, Ill.

On day one, Baffa was paired with local pro Eric Contant of Lakeland, Fla., and sacked up five bass weighing an astounding 24 pounds, 11 ounces. Over the last two days he added 4 pounds, 6 ounces and 6 pounds, 14 ounces to his total to protect his lead and become a Strike King co-angler winner with a three-day total of 35 pounds, 15 ounces. For the win, Baffa takes home a brand new Phoenix boat.

“I’ve been fishing these events as a co-angler for a long time,” Baffa says. “To come down here, catch the biggest limit of my life and finally win one and win a boat – it’s just been an incredible week.”

Three of Baffa’s biggest bass on day one came on a Strike King Red Eye Shad in a golden shiner color tied to 20-pound test fluorocarbon. The rest of his fish during the week came a Zoom Super Fluke (watermelon seed) pegged to a 1/8-ounce weight as well as a Sawamura One Up Shad swimbait.

“What helped me this week was drawing two pros that were fishing in the same area,” Baffa says. “I fished with Eric [Conant] the first day and then Bryan Schmitt today. Knowing the exact area you’re going to and how you will be fishing was a big help.”

Baffa dedicated his win to his late father who passed away two and a half weeks ago.

“He was my biggest fan,” he adds. “He always kept up with me and supported my love of fishing. This is the first time I’ve fished since he passed and I won – so that’s pretty special.”