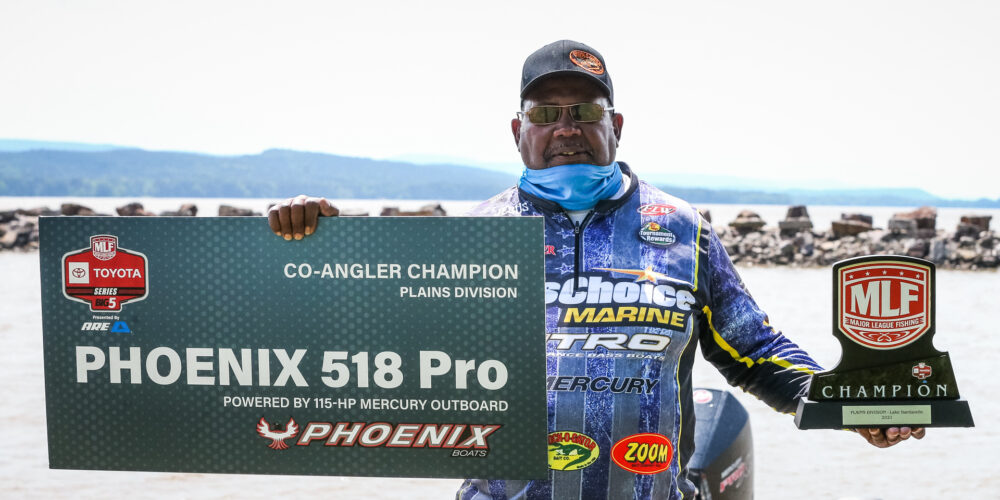 When a tournament is on the line, the last thing you want to do is only bring in two fish. Of course, if one of those fish is nearly 5 pounds, it sure makes up for things, as it did for Michael Carter.

Of course, it’s hard to get on Strike King co-angler for not bringing in a limit the final day of the Toyota Series Presented by A.R.E. Plains Division finale on Lake Dardanelle. There were only seven limits on the co-angler side all week, and none today. So, his 6-pound, 9-ounce bag was more than enough to hang on to the win with 26-1 total.

“This means a lot,” says Carter while fighting back tears. “I’ve been fishing for a long time, and I never got a chance to win the big one. So, I’m overwhelmed. I’m overjoyed.”

A big reason he was in position to win the big one was his limit on Day 1 while fishing with Mike Smola. Then he backed it up on Day 2 with another three fish despite losing a good portion of his day locking up with pro Erick Hurst to the Arkansas River with nothing to show for it.

However, Hurst did clue Carter into the importance of fishing a shaky head, which is how he caught the majority of his fish with either a Strike King Rage Craw (white) or Zoom Trick Worm (green pumpkin magic) on it.

Today, though, the savior was a crankbait.

“Believe it or not, we saw fish busting,” says Carter. “I didn’t have a topwater tied on, but I had a XPS 1.5 shallow-running crankbait. Third cast that big one just gobbled it up.

“I always tell people when my time comes, my time will come. It will happen. Today, it happened.”