Consistent Moreno on Top After Day 2 at the Cal Delta 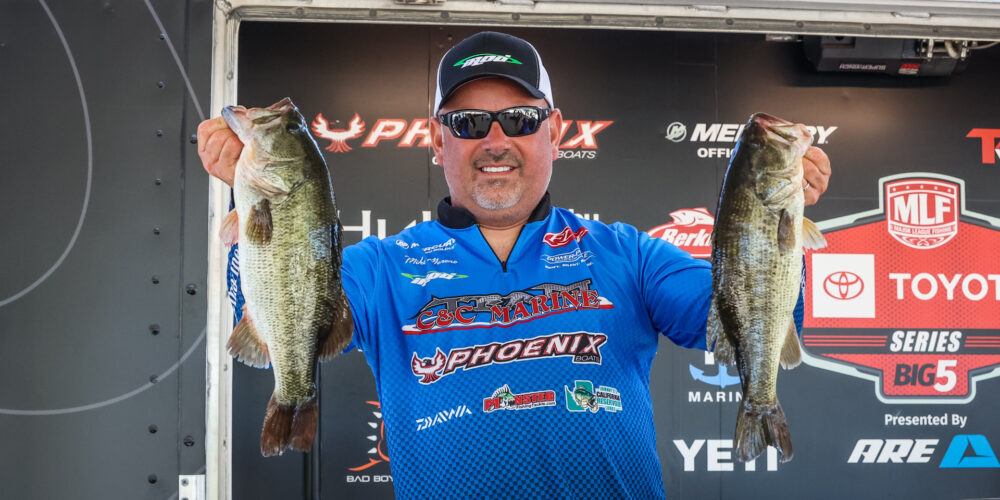 Michael Moreno caught 17 pounds, 13 ounces on Day 2 for a 34-13 total and the lead in the Toyota Series Presented by A.R.E. Western Division event on the California Delta. One of the few who have managed to replicate their success on consecutive days, Moreno leads a volatile Top 10.

With 17 pounds even on Day 1, Moreno’s weight at the scales is one of the few things that have remained the same.

“It’s been completely different every single day,” Moreno says. “Today I had to make complete adjustments and slow down. The incoming tide wasn’t as favorable. Slowing down was the key.”

In the short six-hour tournament day, slowing down can be easier said than done.

“You have to not panic and keep your head in the game,” Moreno says. “I think that’s the biggest thing. Even though you have six hours, you start to panic, and you just can’t do it. You’ve got to buckle down.”

In a tournament that’s still anyone’s game, Moreno will have to strap in and do it all again on Day 3.

“You can’t fish “chicken” and start throwing small baits just to get your five,” he says. “You have to stay with what you did in practice, and hope it all pencils out.”

Oakley native Keith Hurney landed 10 pounds, 12 ounces to secure the Strike King Co-Angler lead on Day 2 with a total of 25-8.

While he’s making it look simple, holding off the competition from the back of the boat has been anything but easy.

“If it fishes any harder tomorrow, I’m going to be hurting to catch a fish,” Hurney says. “It was tough today. We had to grind it out. I think I had two fish by 9:30 or so, I wasn’t feeling like I was even going to get a limit today.”

Fishing on his home water, Hurney has been able to adapt to his boater’s fishing locations – even if they’re different from his usual hangouts.

“My pro was fishing a lot of rock today, which I’m not used to fishing in the Delta, but we were still able to scrape them out,” Hurney says. “We weren’t around a lot of fish, but they were the ones that count.”

Recent changes to the waterway, including the completion of a new dam, have caused competitors to make long runs through some treacherous spots to get to key locations. On top of that, Hurney’s pro had some mechanical issues.

“My pro had some boat problems too,” Hurney says. “His HOT FOOT broke and we were struggling to make it back through some rough water.”

Going into the final day, Hurney will be paired with the Day 2 Leader, Moreno. Hurney hopes to overcome all obstacles and gain some redemption for his family.

“My son was in the lead going into Day 3 of a previous tournament on the Delta and wasn’t quite able to pull off a win,” he says.  “I’m hoping it’s time to bring one home for the Hurney clan.”