Dixon on Top at the Potomac 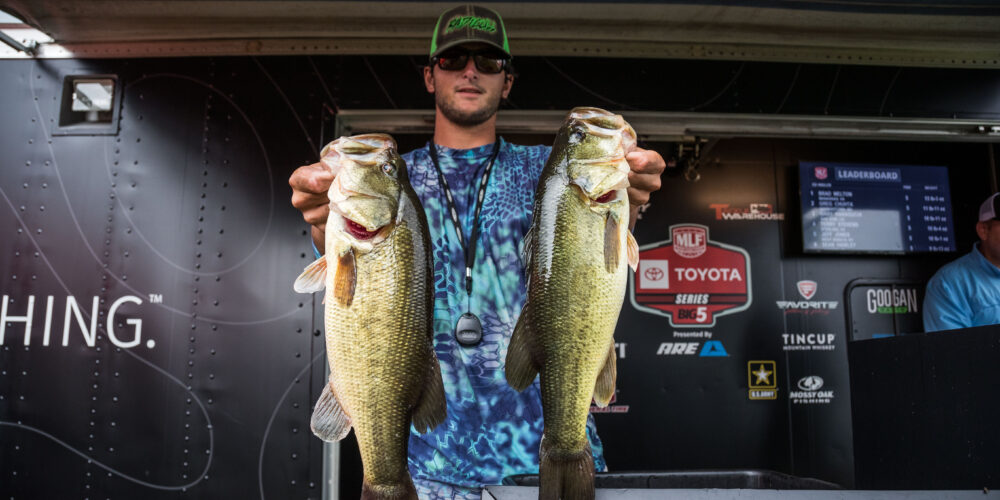 Aaron Dixon of Bel Alton, Maryland dropped 17 pounds, 1 ounce of Potomac bass on the scale to take a solid lead on Day 1 of the Toyota Series Presented by A.R.E. Northern Division finale. In second, Matt Becker put up 16-7 on Day 1 to put himself in contention for the win and solidify his Angler of the Year chances.

A Potomac local and just 21 years old, Dixon says he did exactly what you should do on the Potomac this time of year: Settle down in a few areas and fish the heck out of the grass.

“We started off with a lot of bites, but we missed a lot of them,” says Dixon, who fished with co-angler superstar Michael Duarte currently sitting in seventh. “Between the two of us, we probably got 15 bites, but we only caught seven of them. But by about 10 o’clock, I filled my limit and he got up to four. Then, I told myself once I reached that high-13 or low-14 mark, I was leaving my main area to let it rest. When I did, I went to some backup areas and culled up three or four times, slowly, and pretty much got rid of the first five I caught.”

“I feel like I have the right areas; you just have to adjust with the tide and move in and move out,” he says. “I feel good. I left my area, and at the end of the day I checked my secondary area to make sure they were still biting, and that’s where my co-angler caught his fifth fish.”

Dixon has a horde of talent behind him, with Becker looking for some Potomac revenge and tidal superstars like Michael Iaconelli and Bryan Schmitt not too far in the rearview. But, with 17 pounds to start off, he may have gotten the hard part out of the way en route to a potential win.