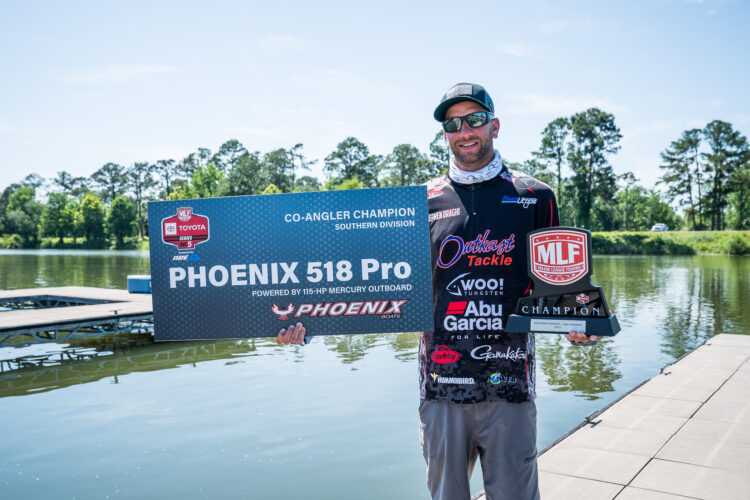 Catching a limit from the back of the boat hasn’t been easy all week in the Toyota Series Presented by A.R.E event on Lake Seminole. With tougher fishing today, it seemed catching a limit at all would be a tall task for the Strike King co-angler field.

Stephen Draghi welcomed the challenge with open arms and paired with pro Matt Baty he caught not only the biggest bag of the day – 12 pounds, 12 ounces – but also the only limit of the final round to slide from fifth to first and claim his first MLF win. With 34-6 total, Draghi can cruise back home to Sparrowbush, N.Y., knowing he’s the proud owner of a brand new Phoenix 518 Pro.

Finesse options are usually key to a co-angler win, but not this week for Draghi. He was a one-bait pony for the entire event.

“I was basically throwing a 3/8-ounce Outkast Tackle Heavy Cover Edition Pro Swim Jig with a Zoom Super Speed Craw on the back, slow rolling it through the grass,” Draghi says. “I lived and died by it the whole time.”

Not only did he rely on that swim jig, it was literally one certain jig all week long, well, until today.

“I broke it off today on a big one,” he says. “I kept re-tying it all week, and man, it barely had a skirt left on it and was showing lead on the head. It was doing work.”

While Draghi had never been to Seminole before, he’s certainly a fan of it now. In fact, a bad tournament on the Harris Chain back in March fueled the fire for him to finish the season out.

“Harris Chain, the last event, was my first time ever fishing Florida,” the 33-year-old co-angler says. “I didn’t really figure them out on Harris and that’s why I came back down here. A little redemption.

While the win today was special, there was another special moment happening he wished he could be a part of.

“My grandpa was inducted to Arlington a couple months ago and today, my family was putting his headstone in there and I was supposed to be there for that,” he says. “I told my family if I made Saturday they wouldn’t be seeing me. So, I’m going to dedicate this one to him.”