Hume Drops 21-4 to Lead at the Cal Delta 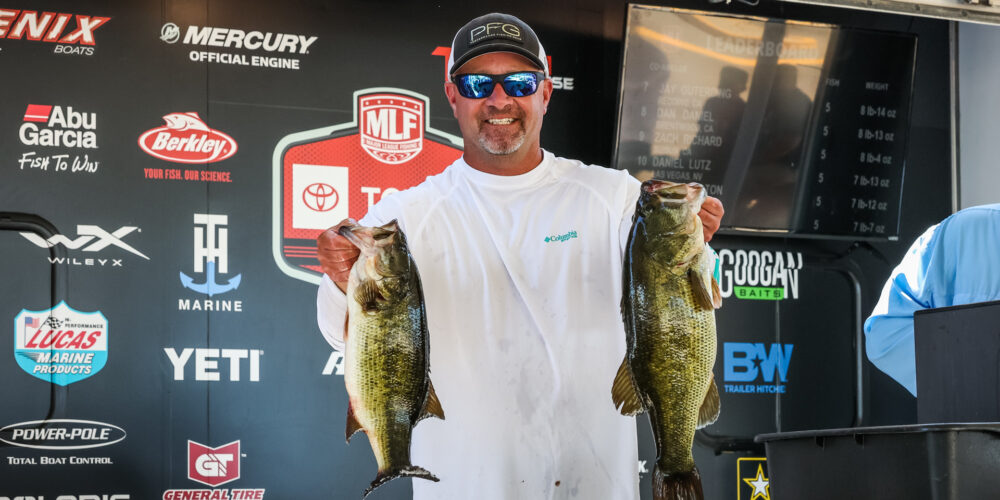 Weighing 21 pounds, 4 ounces on Day 1, local angler William Hume took the lead in the Toyota Series Presented by A.R.E. Western Division event on the California Delta. Overall, the fishing was solid on the first day of the event, with plenty of limits crossing the scale and the top seven all getting over the 17-pound mark.

Hume was able to pull together a sizeable limit throughout the morning, which was anchored by the Day 1 Big Bass. His last-minute 7-pounder was landed just before heading to weigh-in.

While the rest of the leaderboard may be looking up to him, Hume scoffs at his Day 1 performance.

“I fished terrible,” he says. “I missed probably 15 punch bites. I just got lucky and caught that 7-pounder at the end.”

With a shortened summer tournament day, Hume and the rest of the field have to make the most of their six hours on the water.

“The shortened window is terrible. You’re watching the clock the whole day.” Hume says. “You’re trying to go to a spot where you can catch at least a limit, hopefully, a big one, and then you’re just running quick.”

The changing tides left some anglers high and dry, but actually played in Hume’s favor.

“I like the low tide,” Hume says, “It’s good for the punch bite. It brings them out to the edge, instead of way up in all that cover.”

Punching was certainly a key to his success, but it took everything in the tackle box to put together a great start to the tournament. Hume also leaned on buzzbaits, vibrating jigs, and topwater frogs to take the Day 1 lead.

Hume did his best to cover as much of the sprawling fishery as he could.

“We ran most of the Delta,” Hume says. “I probably spent $120 in gas today. You’ve got to fish quick. You can’t slow down. You can’t get stuck in an area. You just got to keep it moving. If they’re not eating, it’s time to go. Find them, they’re eating somewhere.”

Local angler Keith Hurney claimed the top Strike King Co-Angler spot on Day 1 with 14-12 from the back of the boat.

Fellow co-anglers Rommel Bagay and Colby Huntze (who won the season opener) are chomping at his heels, with 14-7 and 14-5 respectively, in what’s shaping up to be an exciting derby on the vast California Delta.

While it’s a mystery to some, the expansive waterway is no stranger to Hurney.

“I could just about throw a rock to the Delta from my house,” Hurney says.

Playing on your home field can certainly be an advantage, but it’s limited when you have little control over the boat.

“We took a long run today. With the short tournament, I was stressing this morning,” Hurney says. “I didn’t start off too hot, but around 9 o’clock I picked up some fish that helped build up my confidence.”

With a shortened tournament day, Hurney was sweating a little but stuck to the co-angler staples.

“Being in the back of the boat meant flipping and drop-shotting anywhere I could, anywhere my pro was missing,” Hurney says. “I’m a big ChatterBait guy, but it’s hard to throw that kind of stuff from the back. You don’t have the same water and casting angles.”

Doing something different could be what it takes to turn the tide this week.

“Some of our regular sticks struggled today,” Hurney says. “It’s not the usual Delta. It’s a little off right now.”

No matter what, Hurney knows someone will be on them. He just hopes it’s him.