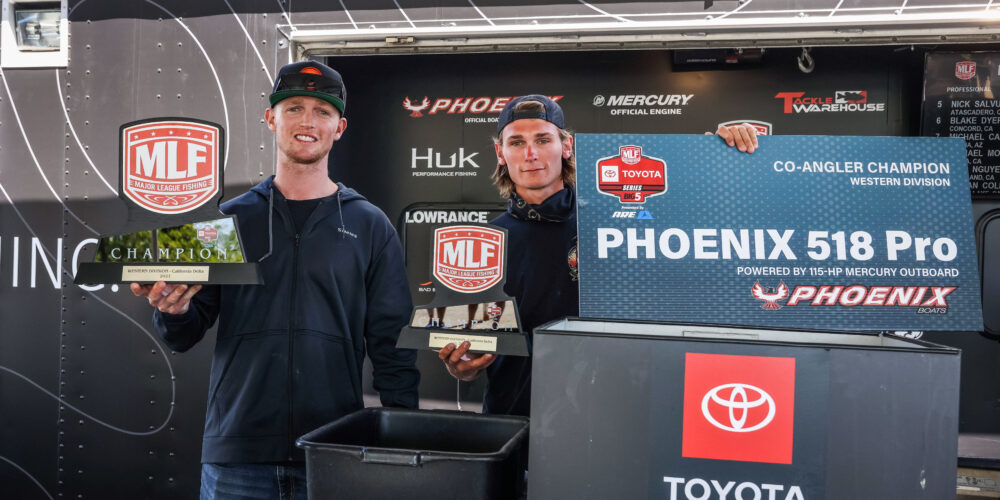 OAKLEY, Calif. – It was a Toyota Series day to remember Saturday for Logan and Colby Huntze.

Putting more than 27 pounds on the scale on Day 1, Logan Huntze kicked off the Toyota Series Presented by A.R.E. Western Division event on the California Delta with a bang. After weighing a mere 18 pounds on Day 2, Logan fell to second behind Ish Monroe. But with another 19 pounds, 7 ounces on Day 3, Logan earned his second MLF win with a 64-12 total.

With the win, Logan takes home a cool $24,293 in winnings and a berth in the Toyota Series Championship this fall on Pickwick Lake.

On the Strike King co-angler side, Logan’s brother Colby Huntze also took the top prize. Leading wire-to-wire, Colby weighed 11-8 on the final day for a total of 45-13. For his win, Colby earned a new Phoenix 518 Pro bass boat.

Logan has fished the California Delta events for the past three years on the pro side and his finishes have gotten progressively better each time. He had an 11th-place showing in 2019, followed by an eighth-place finish last summer, and he notched the win today.

It was an excellent week for Logan, but it was not without some adversity. Fishing out of a borrowed boat, he had engine issues on the first day and could only idle and lost hours of fishing time while waiting for a ride at the end of the day.

“I have a lot of people to thank for this win,” Logan said. “I want to thank my buddy Steve for letting me use his boat and my buddy Ryan for giving me a ride back to weigh-in. Also, the boat dealership Boatmasters took an engine part off of a new boat to make sure I got back on the water – that’s unheard of service.”

Fishing the central Delta, Logan caught his winning bags by punching and throwing a frog, two of the best ways to catch big bass on the California Delta.

“I was fortunate that I found some mats that were protected from the wind,” he said. “My area was calmer and that really helped me on the first day. I caught an 8, a 5 and a 4 before my engine troubles. My co-angler that day was really positive and that helped, and I couldn’t really complain because I already had a good bag. I was able to catch two more 5-pounders in areas I saw while I was idling to get a ride back in.”

His key fish on the first two days came on a Missile Baits D Bomb in either green pumpkin or candy grass. He fished them on a 4/0 Gamakatsu Heavy Cover Flippin’ Hook with a 1 ¼-ounce tungsten weight.

On the second day with a fully functional outboard, he ran back to his best area from the first day.

“There were a bunch of sea lions in the mats, and I couldn’t get a bite,” he recalls. “I had to run some new stuff and I was able to scratch up 18 pounds punching, including a 6-pounder. I was fortunate to get a good bite each of the first two days to keep me in it.”

On the final day, he switched gears again and primarily threw a frog en route to the win, although punching also contributed to a few bass.

“I fished more new stuff and caught two big ones on a frog and about ten smaller ones,” he says. “With the wind blowing so much the first two days, today was much easier to run around and fish where I wanted to.”

With so much vegetation in the system, Logan keyed on areas that were deep enough to hold fish based on the tide chart during the event.

“I was fishing hyacinth mats, some primrose, and dead tules,” he says. “Some of the areas had some grass mixed in. They had three to four feet of water on them during the high tide, which made for a good bite each morning. On the last day, I focused on the cheese mats with the frog.”

It was a wire-to-wire Strike King co-angler win for Colby Huntze at the Toyota Series Presented by A.R.E. Western Division event on the California Delta. Like his older brother, Logan, who won in the pro division, the 19 year old was able to secure the win on his home waters.

Last year, he finished third here and this year, he closed the deal with 45 pounds, 13 ounces. For the win, he took home a fully rigged Phoenix 518 Pro bass boat.

On the first day, he sacked 19-10 while fishing with pro angler Christian Ostrander. He backed that up with 14-11 fishing with Grant Parker and closed the deal with 11-8 fishing behind Ish Monroe.

He did most of his damage this week punching, but a Z-Man ChatterBait and finesse worm contributed to his total.

Huntze primarily fished a 1 ½-ounce tungsten weight with a green pumpkin Reaction Innovations Sweet Beaver, punching behind some of the best in the west at punching mats.

“Most of these guys have been punching so long that they are really good at it,” he says. “I tried to flip places they don’t hit or even into the same holes because you can still catch a fish there. I realized this week that I wouldn’t always get the best flip that I wanted and would look for the second best place I saw in front of me.”