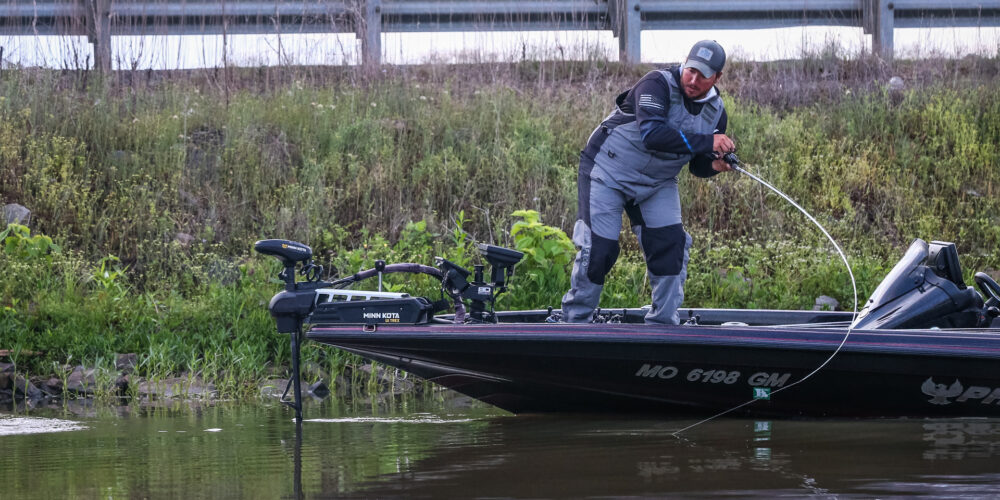 Everybody better get moving, because Kirk Smith is on them.

There was definitely some concern amongst the pros at takeoff for Day 3 of the Toyota Series Presented by A.R.E. Plains Division finale on Lake Dardanelle. Storms came through last night and this morning, and they drew down the water levels a bit to compensate. So much so that pros like Zach King and Chip Hawkins didn’t know if they could get into their backwater areas.

Yet, one guy who didn’t seem worried in the least was Smith, and within minutes of showing up on his spot near Shoal Bay he showed why.

Using his forward-facing sonar to spot isolated stumps and grass patches way out off the bank, the Oklahoma pro landed a pair of 3-pounders and a third keeper within the first 30 minutes and had a limit by 8:13 a.m. – his earliest of the week. Considering he usually then laid off “the juice” once catching a limit and he had more saved areas, he was quite excited about the rest of the day by the time our on-the-water crew left him. At our last check, he had between 13 and 14 pounds, which will make things very tough on the rest of the field to catch him.

The closest one starting the day was King, but his concerns about falling water seemed to be valid. Ironically, yesterday, he was hoping the water would fall a little for today, but it may have fallen too much, as he only had one fish early. Though, we got word he made a move around 10:30 a.m., that he had filled his limit and they were biting, as he actually caught one while our crew was on the phone getting an update, which promptly ended the call.

Bruce Parsons pulled the same trick when he caught his fourth while giving an update, though things got tougher for him after that. Still, the pros were definitely catching them this morning.

Andy Newcomb had a pair off his starting spot, including one over 3 pounds. Meanwhile, Jeff Kriet didn’t have his cranking magic to start, but as the sun came out late morning his bite turned on to give him a small limit. Same goes for Wayne Dixon, who was starting to catch them around Goose Island once the sun popped out.

Fred Roumbanis also informed us he had a small limit for 9 or 10 pounds. He had to do it via phone, though, as he was so far back in Mud Creek – one of the most stump-infested creeks on the lake – that our on-the-water crew’s boat cracked a trolling motor shaft trying to find him.

So, most of the Top 10 have checked in, and simple math says they haven’t caught up to Smith. At least not yet. What’s notable is two guys that couldn’t be found were Chip Hawkins and Theron Caldwell, who were in third and fourth, respectively.

Hawkins said he was taking his old boat and going to be running it into places most couldn’t imagine, and with the sun coming out – the biggest thing he said he needed – it wouldn’t be much of a surprise to see him show up with another bag like he caught on Day 1. And if Caldwell caught some kickers again early like the last two days, he’ll also be right in the mix for the win come 2:30 p.m. CT.