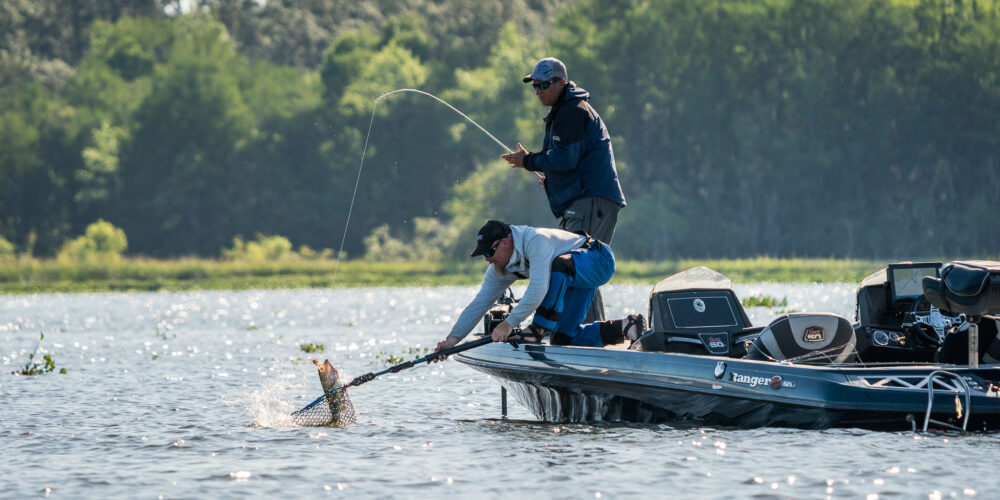 Day 2 of the Toyota Series Presented by A.R.E. Southern Division event on Lake Seminole got off to a much slower start than Day 1.

Yesterday, six pros cracked the 20-pound mark, and the majority of them had that within the first couple hours of fishing. Today, most of the top pros struggled to even get a bite by 10 o’clock.

Leading after Day 1, DJ Ellis ran back to the spot that produced his 25-pound, 15-ounce limit, and though the fish were still there according to his electronics, they weren’t in a biting mood. Rotating between several baits, Ellis finally boxed “three good ones” by mid-morning and as our crew left him he added his fourth keeper to put him close to the 15 pounds. He’s not too concerned that things are slower and says that’s how it can be sometimes. He plans to keep “grinding it out” on that spot for the rest of the day.

Nearby, Bradley Dortch (15th) and Eric Panzironi (sixth) both struggled to get bit. Panzironi had two in the box, though one is over 5 pounds. Dortch on the other hand was still looking for his first keeper when we left.

Down the way, second-place pro Anthony Ford put two fish in the boat early, and as far as we know he’s still sitting on that. Joey Cifuentes started the day in fourth and managed his first keeper around 11 o’clock. So, to say things are much slower today would be an understatement.

One likely cause of a slower bite could be due to cooler, sunny conditions brought on by a high-pressure system. The good news, however, is that the bite seemed to begin picking up this afternoon.

One example of that is Laramy Strickland, who started the day in 17th, had no fish on the boat by noon, yet pulled up to a stretch and put four in the box within 20 minutes. At the same time, Ellis’ co-angler boxed one and several other pros in the area were spotted fighting fish.

Two of the better performers on the day are local studs Matt Baty and Clint Brown. Brown has a limit pushing 15 pounds and Baty had four, with one being a 5-pounder and the other over 3 pounds. Considering these two know more about Seminole than the bulk of the field, it’d be a safe bet that they can adjust this afternoon to make a run at fishing on Saturday.

The wind has been picking up and so has the current in Seminole, so perhaps that’s the recipe to help ignite the afternoon bite. Weigh-in starts at 3 p.m. ET and there’s a lot on the line. Tune in to see who will stay in contention for the title, solidify their Toyota Series Championship berth and possibly be crowned Angler of the Year.