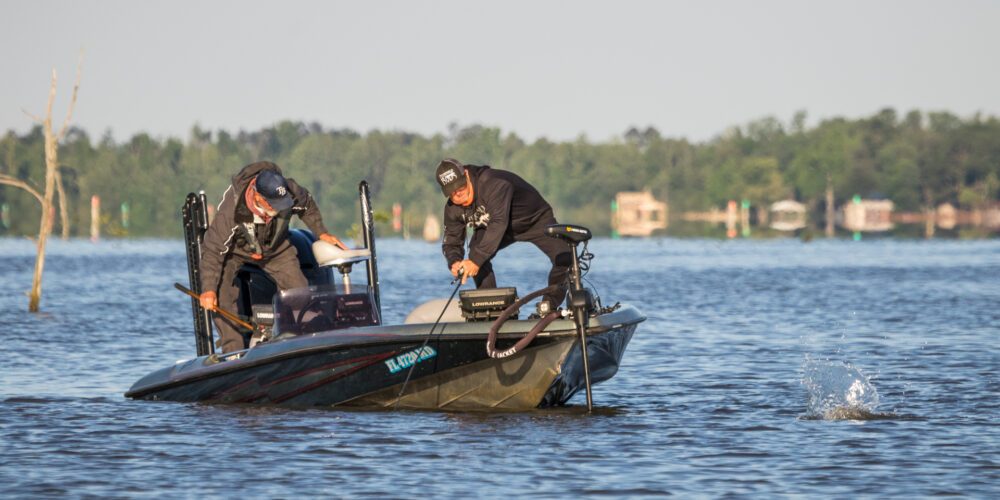 It’s been another gorgeous day on Lake Seminole for the season finale of the Toyota Series Presented by A.R.E. Southern Division. Cool temperatures and a light breeze welcomed the Top 10 on the water and since then it’s warmed up and stayed fairly calm.

All week some anglers have taken advantage of a morning bite, while others heated up late in the day. So far, that’s been about how it has played out today.

Leader Clint Brown started back on his clumps on grass in Spring Creek and got four fish in the boat fairly quick, though they were mostly 2-pounders. Throwing a vibrating jig in various colors, Brown eventually connected with a 5-pounder and one close to 3 pounds. By the time our reporter left Brown, he was sitting on a limit worth roughly 14 pounds.

DJ Ellis, who led on Day 1, was just up the creek and by midmorning had yet to put a keeper in the boat. He eventually abandoned his juice and ran some new water. Our crew never caught back up with him, so we’ll have to wait until weigh-in to see what kind of magic he could make.

Third-place pro Nick Thliveros and eighth-place pro Braxton Clements have been fishing shoulder to shoulder all week in Spring and they started that way again today. Both were putting fish in the box quickly, each with around a 3-pound average. Since the morning bite, Clements has been able to cull up to around 18 or 19 pounds, though according to spectators he may have more.

Making the most of the final day is local and Spring Creek aficionado Matt Baty. He put four good fish in the boat to start the day and around midmorning reported catching a 7 and a 5. He thinks he’s got around 20 pounds, which would give him the unofficial lead.

For the rest of the pros, it’s been slow going. However, the afternoon bite has been solid all week and Brown culled up from 15 to 25 pounds yesterday afternoon, so nothing is set in stone. Weigh-in starts at 3 p.m. ET and it’s likely going to be a battle of who can catch the biggest bag on the day to win the title. Plus, there will certainly be a few Seminole bigguns to watch come across the stage, so buckle up.