Loberg Pulls Ahead on Havasu 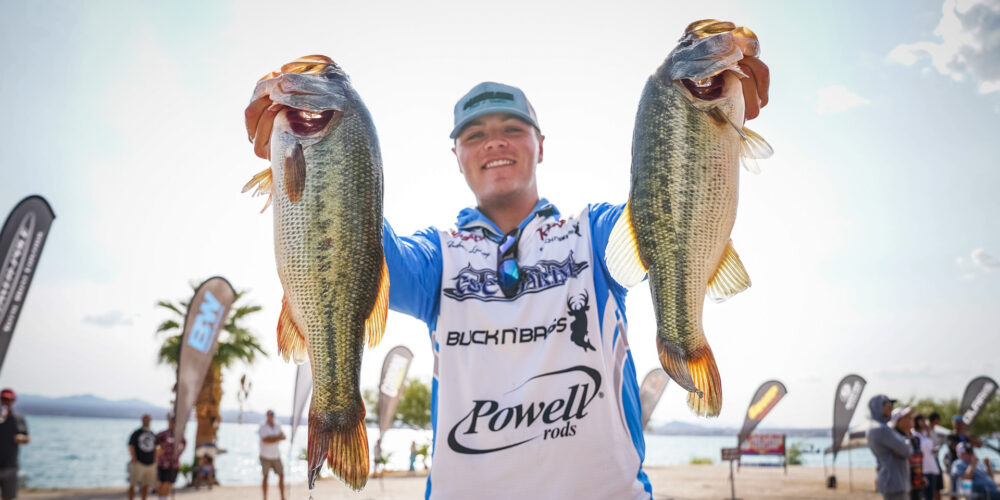 It was a small field to begin with, and now it’s basically a two-horse race, with a strong dark horse lurking in third.

Lake Havasu has done some serious humbling to pros after two days of the Toyota Series Presented by A.R.E. Western Division finale. Whether it’s the time of year, fluctuating water, 100-degree heat or whatever, Havasu’s bass have been stingy, regardless of species or where an angler tried to fish.

Yet, three impressive names have clearly set themselves apart – Andrew Loberg, Mike Williams and Roy Hawk. The local Williams’ 20-pound bag held the lead after Day 1, but Loberg – fresh off winning the last Western Division event at the California Delta – took it today with his 18-10 bag on the heels of his 19-9 yesterday. That gives him 38-3 total, a mere 7 ounces ahead of Williams. And then there’s Hawk sitting in third both days, who is not only a Bass Pro Tour pro but also a local with as much experience on Havasu as anyone.

Oh, and all three are fishing similarly, even fishing near one another at times. Yeah, Saturday should be a fun showdown.

As for today, while all three did damage early, it was Loberg who managed to put together the biggest bag of them all thanks to two spots in one quarter-mile stretch.

“I’ve got two small areas where I’m targeting grass and wood with deep water nearby,” says Loberg. “And I’m just ripping a crankbait as hard as I can, popping it out of the grass and making them react to it. It’s not really one specific cast. I’m just fan casting around the point and secondary point as many times as I can until I get one to react.”

Obviously, it’s working as he caught eight keepers today, leaving his best spot by 9:45 a.m. and the secondary one by 10:30 a.m. after he caught a 4 ½-pounder. From there, he just fished other stuff to save his main areas, and he never caught anything of note.

Banking his entire tournament on one area does have him a bit concerned, but he knows the fish are down there, as he says he sees plenty on his forward-facing sonar. It’s just a matter of getting them to react, which requires tons of sun and little wind.

Then again, while he admits he prefers to fish aggressively, he says he’s not above pulling out a spinning rod tomorrow if he gets desperate.

For now, though, it’s power fishing-or-bust, as he feels that’s his best bet to hold off the two stud locals lurking behind him and trying to keep him from winning back-to-back Toyota Series events.

“It will be a shootout,” says Loberg. “I’m stoked. I’m just trying to carry the momentum, but it’s fishing. I can get my hopes up, but I have to go out and do it again tomorrow, [especially with locals like those two behind me]. Any of them can catch a mega bag. So I’ve got to execute, do what I’ve been doing all day tomorrow, and hopefully I can get five more.”

He extended his lead, but Jason Akins can’t be content. Not after what he saw his friend do today.

The Apple Valley, Calif., Strike King co-angler continues to lead, backing up his 14 pounds, 4 ounces from Day 1 with 13-3 today. So his 27-7 total puts him more than 4 pounds clear of the guy behind him.

Trouble is, the guy behind him is his good friend Kevin Gross.

Why is that noteworthy? Because Gross brought in 17-15 today while fishing with Mike Williams. And he’ll be fishing with Williams again tomorrow.

“Kevin is one of my best friends,” says Akins. “So him being in second is super cool.”

Of course, Akins will be fishing with leader Andrew Loberg, who has put his co-anglers on some decent bags, too. Though, Akins will have to switch up his tactics compared to today.

Fishing with Cody Steckel, Akins spent the majority of the day flipping. Doing something a little different than his pro allowed him to catch seven keepers. But he’s definitely excited to get back out offshore for tomorrow.

“I’m ready for whatever,” says Akins, who is looking for his second Toyota Series co-angler win on Havasu. “I want to learn, and I’m hoping we sack them.”