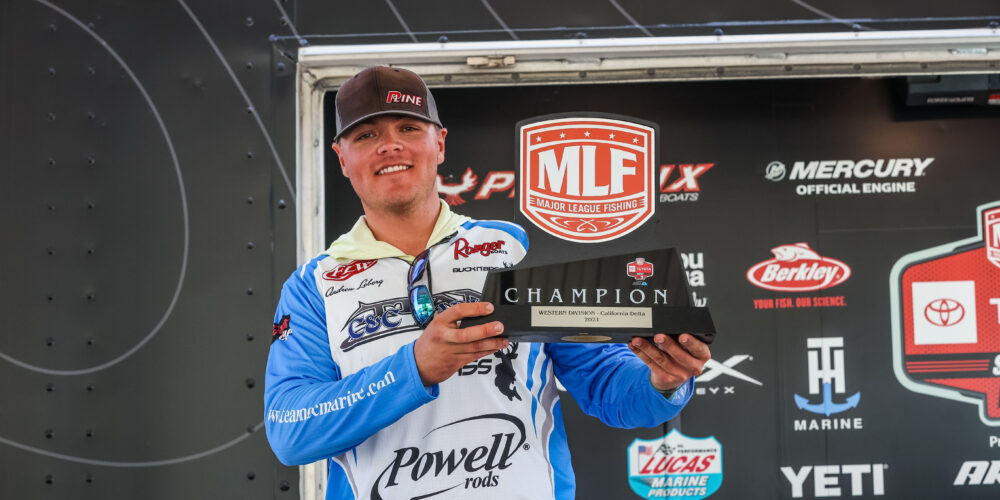 Having posted a few Top 10s in Toyota Series Presented by A.R.E. competition in recent years, Andrew Loberg was finally able to seal the deal for his first big MLF win thanks to a stellar final day on the California Delta. In the second stop of the Western Division, Loberg put up bags of 19-3 and 13-2 on Days 1 and 2, respectively. Entering the final day in fourth, the young pro dropped the biggest limit of Day 3 – a 23-6 stringer – to easily grab the win in what was a tough Cal Delta event.

“I had a really good Day 3; everything fell into place,” Loberg says. “I’ve been trying to hit new water each day. I pulled up to one spot today and they were there. Normally the Delta gets the best of me, but I had a great week. I’m really happy with it.”

Falling water temps, changing tides and short tournament days all forced Loberg to think on his feet to take home the top spot.

“The Delta is always changing, and I was able to adapt with it,” he says. “Going into this week, I just wanted to strictly punch, but I knew as each day of the tournament went on we’d have higher water in the morning. It got a little scarier each day.”

High tide required Loberg to trigger a reaction bite early in the morning before turning to punching vegetation later in the day.

“Each morning I’d start off throwing a ChatterBait, buzzbait or spook of some sort,” Loberg explains. “I focused on a lot of current, just trying to catch a limit. Once that tide dropped out, I’d go punch the rest of the day.”

He put his Powell Endurance Rods to work, punching key vegetation with a Reaction Innovations Sweet Beaver or Missile Baits D-Bomb. Loberg alternated between a 1- and 1 1/2-ounce tungsten weight, depending on the wind and thickness of the vegetation.

While still early in his career, Loberg’s first major MLF victory was a result of many hours on the tournament trail.

“I started fishing the regional high school tournaments, then fished the FLW Collegiate Series and got to travel the country with my buddies,” Loberg says. “Then, once I graduated college, I decided it’s time to step it up and fish out of the front of the boat.”

No stranger to rolling up his sleeves, Loberg was able to put his passion and work ethic to good use this week.

“I’ve worked really hard since I was younger. I just absolutely love tournament bass fishing,” he says. “Winning one of these means so much.”

Loberg’s dominance on the Delta earned him a $21,556 payday and automatically qualified him for the Toyota Series Championship in late October, where he’ll have the chance to fish for the $200,000 top prize on Pickwick Lake.