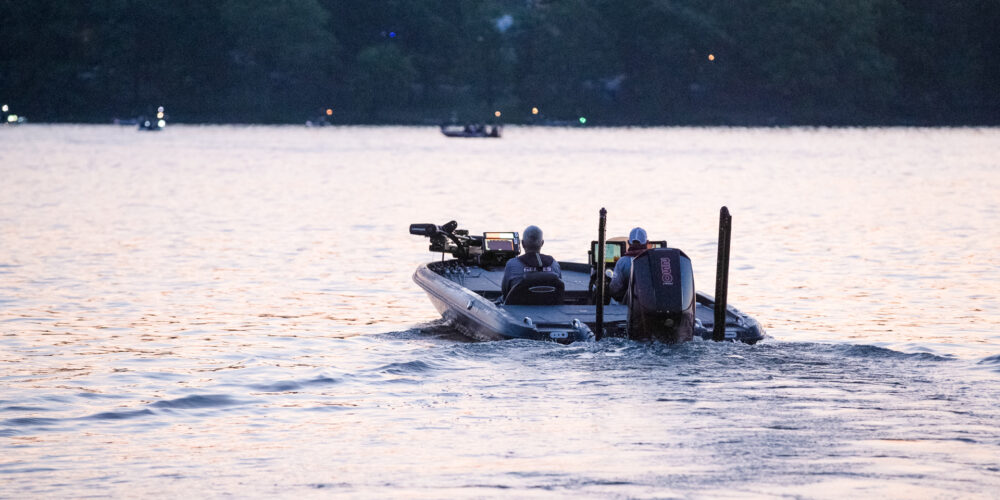 CHATTANOOGA, Tenn. – With more than 500 pros and Strike King co-anglers on hand, the Toyota Series Presented by A.R.E. Central Division will call it a wrap this week on Lake Chickamauga. Hosted by Chattanooga Sports, the three-day tournament is the third and final event of the season for the Toyota Series Central Division anglers, who will be fishing for a top prize of up to $95,500 on the pro side. The season finale may well present some different challenges from years past.

The spawn is underway, and many anglers are predicting a shallow bite as Chickamauga water levels are nearing full summer pool. However, many anglers love the deep-water ledge bite Chickamauga often provides. River flow, however, has been exceedingly low recently. Basically, the bare minimum of water is moving and many anglers agree the lack of flow has bass more scattered and a bit lethargic.

In addition to Chickamauga proper, anglers are allowed to pass through the upstream and downstream locks to fish either Watts Bar Lake to the north or Nickajack Lake to the south.

Located in southeast Tennessee near Chattanooga, Lake Chickamauga is a Tennessee Valley Authority (TVA) impoundment created in 1940. Downstream the 46-mile-long Nickajack Reservoir flows through the Tennessee River Gorge. The 26-mile river gorge is the fourth largest river gorge in the Eastern United States. Upstream is Watts Bar Lake. Between the three reservoirs, anglers have more than 175 miles of the Tennessee River they can potentially fish.

In the year 2000, the Tennessee Wildlife Resources Agency (TWRA) began an annual program to stock Florida-strain largemouth fingerlings in Chickamauga. It took nearly a decade before the program began paying dividends but in February 2015, Gabe Keen broke the 60-year-old Tennessee State Record with a largemouth that weighed 15 pounds, 2 ounces. That fish was actually caught near Chester Frost Park, the takeoff point for this year’s tournament.

Chickamauga has yielded big numbers of 10-pound-plus bass in the last decade. Due to the success of the Chickamauga stocking program, TWRA biologists expanded it to many other Tennessee lakes in 2015, including Nickajack and Watts Bar.

Some local anglers have actually been saying that Nickajack is fishing better than Chickamauga recently.

Chris Peters, a local guide fishing the tournament this week, said he won’t be locking through, but, “I think there will be a lot of guys fishing Nickajack. I wouldn’t be surprised to see it won on Nickajack.”

“Nickajack is a sleeper,” he said. “There aren’t nearly as many tournaments down there and the fish are not as pressured. I think we’re going to see some boats heading for the locks Thursday morning.”

Between Lake Chickamauga and its neighbors, bass anglers can find water and fishing locations that will suit virtually any pattern they prefer. With water temperatures typically in or near the low 70’s, it is a good bet, however, that many anglers will be watching shallow water for spawning fish.

Today is predicted to possibly the warmest day of the year so far with highs in the upper 80’s. However, an approaching cold front with a widespread chance for showers and storms could occur overnight and into Friday. Some heavy downpours are predicted with Friday rainfall totals up to 1-inch, making sight fishing much tougher.

Chickamauga is well-known for a potential excellent offshore, ledge bite and many anglers are chomping at the bit to get started on that pattern.

“I saw fish showing up on ledges two weeks ago,” said Peters. “But since then, our [water] flows have gone down and I’m not seeing as many out there. Of course, the current causes fish to concentrate and fires them up to bite better. We’re just not seeing much of that right now.”

Bass Pro Tour pro Andy Morgan from Dayton, Tenn., has been fishing Lake of the Ozarks this week. However, Chickamauga is his home lake and he’s watching to see how the Toyota Series anglers do.

He agrees with others who say the lake isn’t fishing as strong as normal right now.

“The fish are there. It’s all pressure,” he added. “The lake is just seeing lots of tournaments and lots of people are coming to Chickamauga from all over hoping to catch a big fish. It’s not like the fish are gone. They’re just tougher to catch.”

Morgan says because of the low flow conditions and fishing pressure, anglers are going to have to fish smarter.

“I think folks have got to be more savvy,” he said. “Adjust line sizes, stay farther away from the fish. Use spinning rods, smaller baits and smaller line.”

Morgan says basically Chickamauga bass are scattered in every phase – 33 percent prespawn, 33 percent spawners and 33 percent postspawn. Hence virtually any tactic anglers want to use can come into play.

Davis said that scenario provides a perfect opportunity for anglers to just fish their own game – using the tactics and techniques they’re best at and have the most confidence in.

“With fish in every phase I think everybody just needs to fish their strength,” he said. “It has been pretty tough out here. Fishing pressure isn’t helping. And I can’t remember the flow being this low in May in a long time.”

Peters believes he, along with lots of other anglers, will be trying to locate spawning shad in shallower coves, especially early morning.

“The shad spawn will play big,” said Peters. “If a man can find a shad spawn, he can capitalize on it.”

Derik Hudson, the current points leader in the Central Division Angler of the Year race, agrees. Hudson says he is hoping to capitalize on an early morning shad spawn bite using a Missile Mini Swim jig with a Missile Mini D Chunk trailer.

“If you can find a good shad bite and make it happen in the first hour-and-a-half, you can put a limit in the livewell then kind of relax the rest of the day,” he said.

Hudson admits, however, that you can’t come to Chickamauga and ignore the deep-water ledge bite.

“In practice I’ve found that with no flow, they’re really reacting to finesse baits, like drop-shots,” he said. “The question is, you don’t know when you’re going to get a big bite and that’s what is going to separate the pack.”

A shad bite, locating spawners, trying to find a magic bullet for the offshore bite and Nickajack Lake as a potential “sleeper” are the biggest factors on Day 1. The angler who can excel on any one or more of those factors will be set up best to win.

“It’s really different this year,” he said. “It’s tough because we’re just not finding the numbers of active fish. They seem super scattered, both shallow and deep. I’ve got a couple of key areas I’m counting on but I’m going to be moving around a lot. I’m just going to put my head down and try to catch five a day. This is really anybody’s ball game.”

Davis said, “I do think there is a big wave of fish that haven’t spawned yet.”

Hudson said during his practice days it has been very hit or miss finding spawners.

“I’ll go long ways and see absolutely nothing,” he said. “Then I’ll come up on one spot and find five bedded fish in a 50-yard stretch.”

He agrees that Friday’s weather won’t be great for sight fishing, but that may not matter too much.

“I’ve got a lot of spawners marked,” he said. “I’ll be able to fish them even if can’t see them.”

Davis has set himself a high target, beyond what many others are predicting.

Miles Burghoff of Dayton, Tenn., is less optimistic, predicting that 54 pounds could potentially win and that it will take about 33 pounds to make the Top 10.

There will likely be more anglers locking through to Watts Bar or Nickajack than normal, especially with local talk of good catches on Nickajack. With the launch point at Chester Frost Park rather than Dayton, 25 miles upstream, it is only a 10-mile run to lock through to Nickajack.

Locking through still cuts way down on an angler’s fishing time so those folks will need to make efficient use of the time they will have.

“The last two Springs have been really weird,” he said. “We’ve had huge variations in weather and rainfall. It seems like fishing has been tougher everywhere.”

Finally, visiting anglers are encouraged to learn to pronounce “Chickamauga.” It drives the locals crazy when they hear anglers refer to “Chick-A-maw-gwa,” with a soft “G.” It is pronounced “Chick-a-MA-guh,” with a hard “G,” please.

The Angler of the Year Race Wraps Up

With 508 points, Hudson leads Davis by only 9 points for Central Division Angler of the Year.

“It feels good being in first,” Hudson said. “It’s definitely better than trying to chase somebody down. But I’m not worrying about points. I’ve been doing this a long time and a pro told me a long time ago, ‘Just fish to do good in each event and Angler of the Year points will come.’”

“I came in second place in Angler of the Year in 2020,” he said. “And I came in second in this (Toyota Series) event last year. But I’m trying hard not to think about it and just fish my best.”