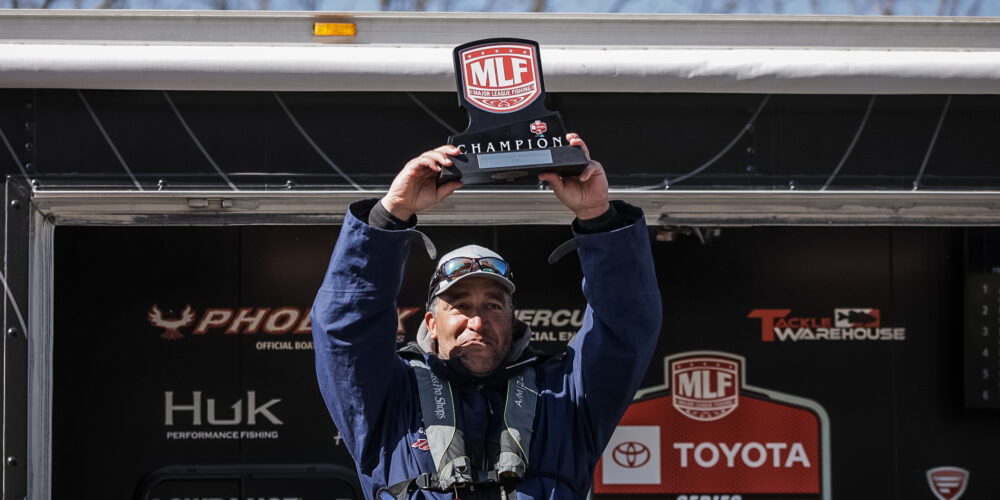 Ted Williams once said, “Baseball is the only field of endeavor where a man can succeed three times out of ten and be considered a good performer.” The same can probably be said for tournament bass fishing, which means Bryan McNeal can go ahead and consider himself great.

In his first-ever major bass fishing tournament, the 37-year-old active-duty Air Force member – fresh off deployment, no less – won from the back of the boat with the largest Strike King co-angler bag of the tournament on Day 2 (18-15), which he followed up with two fish for 6-6 to upend Tim Jolley, who led after Days 1 and 2.

Prior to the second event of the 2021 Toyota Series presented by A.R.E. Central Division season (having missed the first tournament on Guntersville due to being snowed in), McNeal had never fished a tournament other than some $25-entry-fee military bass club events. A couple years from retirement, McNeal was searching for some experience and an opportunity to learn the ropes from some of the best.

“I was looking for a series to do, and I had no clue,” he says. “I went on Google and I found one (the Toyota Series) I could fish as a co-angler. That’s a good learning experience, and I don’t have to get out there and tear up my new boat and learn some new waters – just getting out there and getting some experience from some of the pros.”

The new boat McNeal references is one he had custom-built recently, though he now has a second brand-new boat courtesy of MLF – a Phoenix 518 Pro he earned with the win.

When McNeal retires, he plans on doing a whole lot more fishing. That’s easier to do when you’re starting out up one new boat.

“My first plan was to just do the Central Division this year and see what happens and go from there,” he admits. “I haven’t thought it out because I didn’t expect something like this to happen to me, so going forward, I want to keep following the trail and maybe do more stuff and hopefully one day make it to the big leagues. This is definitely a good start.”

Wanting to make a second career out of bass fishing is understandable when you consider that McNeal caught his personal-best bass at the age of 10 – a 10-pound, 4-ounce tank that instantly addicted him to a life of chasing big brown and green fish. Now, the path to much more bass fishing is a lot clearer.

McNeal still admits he has a lot to learn; namely, how to fish fast – something that served as a stumbling block on Day 1 and led to zero keepers and what could have been a brutal blow to his hopes of turning in a good finish this week.

On Day 2, though, paired with Anthony Bowman, McNeal was able to fish the way he likes: slow and methodical. The pair flipped shallow water all day, and McNeal took full advantage of a style of fishing he’s become especially accustomed to both from his experience in Florida and his more recent fishing endeavors on Cross Lake in Louisiana and Lake Maumelle in Arkansas.

“[Bowman] took me out toward Mitchell Creek and we flipped bushes,” he says of his Day 2 program. “That’s the one thing I’m good at.”

Despite this having been his first time even seeing Dale Hollow, McNeal was able to parlay his prior experience into a win. Even more importantly, though, he was able to continue stoking the fire that is his drive to keep fishing.

“[Dale Hollow] is one of the bigger lakes I’ve fished, and I actually went far down it,” he says. “Hauling tail on the open water … I can’t wait to come back again and explore the lake in a less time-sensitive and pressurized fashion.”

When he does, he’ll have a couple boats to choose from to see the sights.