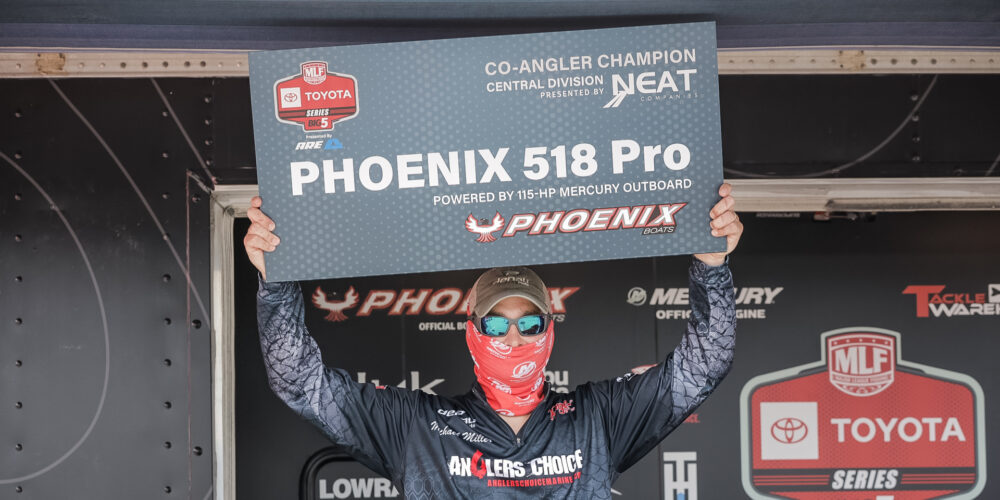 With a three-day total of 34 pounds, 12 ounces, Michael Miller of Greenville, S.C., took top honors on the Strike King co-angler side in the Toyota Series Presented by A.R.E. Central Division finale on Lake Chickamauga. With a limit each day and 10-9 on the final day, Miller earned his third MLF win (his first above the BFL level) and a new Phoenix 518 Pro bass boat.

The Central Division is presented by Neat Companies. This event was presented by Googan Baits and hosted by Fish Dayton – Rhea Economic & Tourism Council.

With over 50 events to his credit, Miller has been around the block a time or two with MLF.

“It’s awesome,” he says of the win. “I’ve made a few of these day threes, and just always come up a little bit short. I’ve been dying to make it back into the Top 10 and make it happen.”

The first two days of the event, Miller fished shallow.

“I had three great boaters, we just had a blast every day,” says Miller. “The first two guys were up shallow. I knew, for me, those were going to be survival days. So, I picked up a 6-inch Strike King Cut-R Worm on a light Texas rig and just flipped around on anything shallow I saw. I managed to get lucky and get five bites on Thursday and Friday.”

On the final day, Miller was paired with eventual winner Jordan Hartman and went offshore.

“Today we went out deep, and I tried throwing a crankbait and a spoon and a ChatterBait and stuff like that,” says Miller. “I was really struggling. By 10 o’clock I didn’t have anything. So, I picked up a shaky head and ended up catching quite a few fish and six keepers.”

Fishing on Chickamauga for the first time this week, Miller made it pay off. On top of that, his finish boosted him to fourth in the Central Division standings, which marks his second finish in the Top 10 in two years.