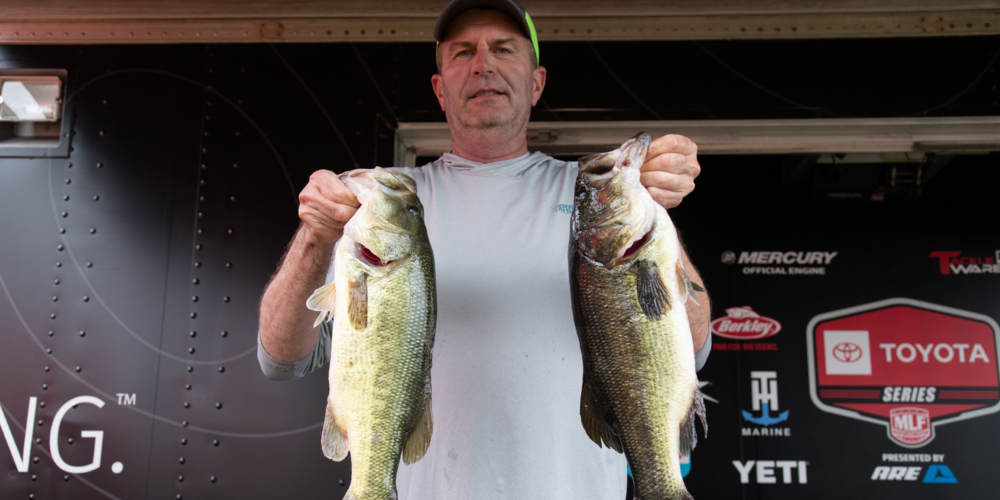 MARBURY, Md. – Optimism and results don’t always align in fishing. Well, they sure did today on the Potomac River.

Word going into the first stop of the Toyota Series Presented by A.R.E. Northern Division was that everything was lining up for the Potomac to “pop” and show out. That absolutely happened today, as misty, overcast conditions helped the field put a beatdown on the fish.

Along with endless limits, there were not one but two 20-pound bags, with leader Jeff Coble and Jeremy Gordon catching 20-5 and 20-2, respectively. To put that in perspective, the Day 1-leading bag from last year’s Tackle Warehouse Pro Circuit event on the Potomac was 17 pounds by Lawson Hibdon. He wouldn’t even be top five today.

So, are we likely to see this continue for the rest of the derby? Not likely, according to Coble.

“Today was definitely a one-day wonder,” the North Carolina pro said. “Most my fish were caught on topwater, which is a hero or zero deal. That’s hard to duplicate two days in a row.”

Coble admits the overcast conditions truly played into his favor. He started out catching fish on a vibrating jig, but once he realized the conditions were holding, he figured the topwater was his best better for a bigger bite, and he didn’t put it down from early on to the rest of the day.

Of course, topwater bites are fickle, and he says once the tide got high toward the end of the day, his bite completely shut down. Throw in the forecasted sunny conditions tomorrow, and he doesn’t expect his popper to play near as much as it did today.

“I’d be happy 15 pounds tomorrow,” Coble said. “I’ll start with the topwater, but I don’t know how long it will last. Then I’ll just throw a vibrating jig like everyone else.. I’d have to guess the lion’s share of fish today were caught on vibrating jigs. I saw too many people throwing and catching fish on them.”

While he did see other anglers on Day 1, one thing Coble says he has in his favor is that he never fished in a crowd in any of the four spots he hit today. He’s obviously found some of those tiny areas that are holding better quality, so he’s certainly thrilled for his chances going forward.

“You have to be happy to come to place like this that’s as complex as far as putting a big catch together and do it, even just for one day, anyway,” Coble said.