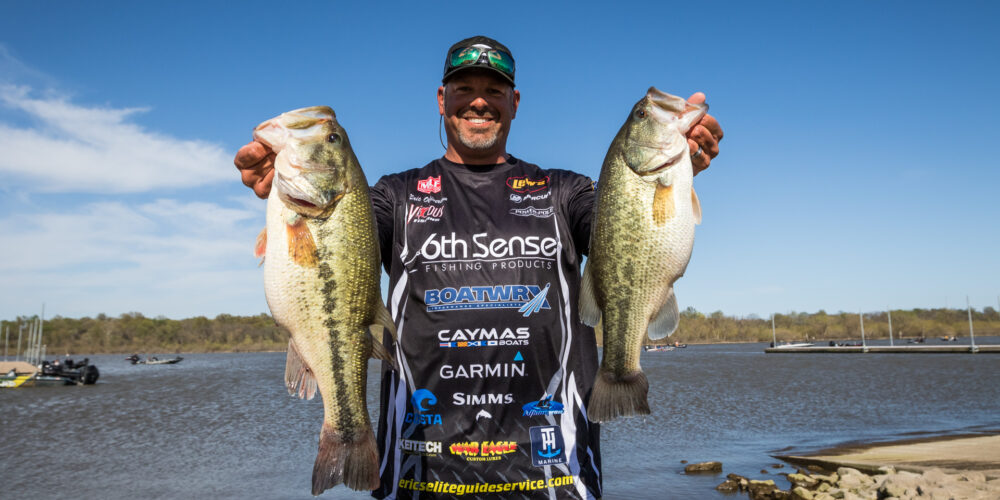 Eric Olliverson set out this season with the goal of winning the Strike King Angler of the Year title in the Toyota Series Presented by A.R.E. Plains Division. So far, he’s off to a great start in his campaign. Fresh off a Top 10 just a month ago on Lake of the Ozarks, Olliverson is eyeing up another strong finish this week on Grand Lake.

Dropping 21 pounds, 12 ounces on the scale on Day 1 of the event, which is presented by Fenwick, Olliverson holds a 7-ounce lead over fellow Ozark ace James Watson and he’s more than pleased with his start.

“I don’t think it could get any better could it,” Olliverson says of his leading bag. “I’ve fished five total events on this lake ever I think. But it just seems like I mesh really well with it. I won a boat here 10 years ago and it was the same type of deal. These fish are setting up in a prespawn deal and honestly going out this morning I had no idea what I would catch today.

After a cloudy start, the sun poked out around 10 a.m. today and really helped move some fish towards the bank this afternoon. Olliverson is aware that things are changing quickly and he’s ready to adapt.

“I think every day we need to be looking; every hour we need to be practicing, because [the spawn] is transpiring throughout the days here,” he adds. “It’s happening hour by hour. There was a flurry this morning and I was able to catch a few big ones and there was definitely an afternoon flurry.”

Though Grand is a big lake when you factor in the number of pockets and coves, it can tend to get crowded in a hurry. Olliverson dealt with pressure today and he’s sure it’ll be a factor tomorrow, too.

Pressure aside, the bass on Grand are wanting to push shallow, which should keep many of the areas the top pros are fishing in play. Olliverson plans to hit the lake tomorrow, run his program and see what happens.

“I’m seeing a ton of boats,” he says. “If you don’t get to certain key stretches of bank quick, they’re covered up. A lot of times I’m having to revisit the areas I’m fishing and what’s amazing is they’re reloading. It’s a good thing.”

When you catch a 6-pounder to start the day, things are going your way. That was the case for Kit Lueg who weighed 18-12 with just four bass to grab a slim 10-ounce lead over second.

“It was an awesome day,” Lueg says. “I caught all three of my big ones in a row. It was amazing.”

After taking a break from fishing tournaments to work on vintage cars with his son, Lueg came back full-tilt. He’s qualified for the last two Toyota Series Championships, and he’s hoping to make it three in a row.

One thing that’s playing into his hands this week is the fact Lueg is comfortable fishing a lake like Grand.

“I like the rock and the wood,” he says. “I’m not a fan of the grass. This is right down-home. Truman, Lake of the Ozarks and Stockton are where I like to play. So, this is awesome.”

As far as catching them again tomorrow, Lueg knows co-anglers can be at the mercy of their pro.

“When the boaters put us on ‘em, we cast and get what they leave. I hope tomorrow goes as good as today.”