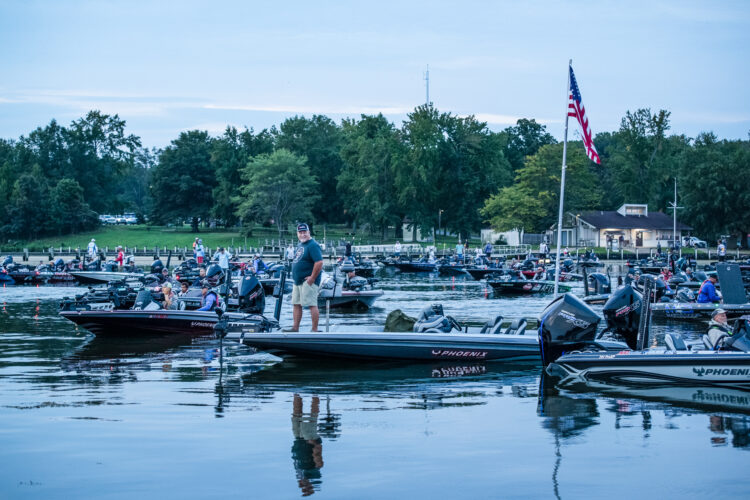 MARBURY, Md. – The Toyota Series Presented by A.R.E. Northern Division will kick off its 2022 season next week in Marbury, Maryland, June 23-25, with the Toyota Series Presented by A.R.E. at the Potomac River. Hosted by the Charles County Board of Commissioners, the three-day tournament is the first event of the season for the Toyota Series Northern Division anglers and will feature the region’s best bass-fishing pros and Strike King co-anglers casting for a top prize of up to $75,000.

Pro Cody Pike of Powhatan, Virginia said he expects the fish to be biting and to see a great post-spawn event.

“June is typically a really good month on the Potomac River because the bass get to feeding and haven’t been completely pressured where they won’t bite anything,” Pike said. “They should be moving out to the grass off the bank and there will be some bass guarding fry, so if a guy can find some good milfoil off the bank in about 2- to 4-foot of water, it’s liable to hold a good group of fish.”

Pike said he believes the three most popular baits during the event will be ChatterBaits, swimjigs and senkos.

“They’ve been catching them really good on the Potomac this year and have been pulling in a lot of 15 to 16-pound bags still, which is good,” Pike said. “There will definitely be a lot of 13 to 14-pound bags, but the key will be to break that mark a couple days in a row to do well in this event. I would expect 17 to 18 pounds per day to win this tournament.”

Pike, who fished in both the Eastern and Northern Divisions of the Toyota Series for several years before qualifying to fish the Tackle Warehouse Pro Circuit in 2021, said it’s a great stepping-stone for anglers who are wanting to advance to the next level of professional bass fishing.

“You don’t have to travel too far from home, and it’s a great arena to play in and have the opportunity to advance further, especially if you are looking to only fish regional events,” Pike concluded.

Anglers will take off daily at 6 a.m. ET from Smallwood State Park located at 2750 Sweden Point Road in Marbury. Weigh-ins will also be held at the park and will begin at 2 p.m. Fans are welcome to attend the event or follow the action online through the “MLF Live” weigh-in broadcasts and daily coverage at MajorLeagueFishing.com.

The 2022 Toyota Series Presented by A.R.E. consists of six divisions – Central, Northern, Plains, Southern, Southwestern and Western – each holding three regular-season events, along with the International and Wild Card divisions. Anglers who fish in any of the six divisions and finish in the Top 25 – or the top 12 from the Wild Card division – will qualify for the no-entry-fee Toyota Series Presented by A.R.E. Championship for a shot at winning up to $235,000 cash. The winning Strike King co-angler at the championship earns a new Phoenix 518 Pro bass boat with a 115-horsepower Mercury outboard. The 2022 Toyota Series Presented by A.R.E. Championship will be held Nov. 3-5 on Lake Guntersville in Guntersville, Alabama, and is hosted by Marshall County Tourism and Sports.