Round 2 Kicks Off on the Cal Delta 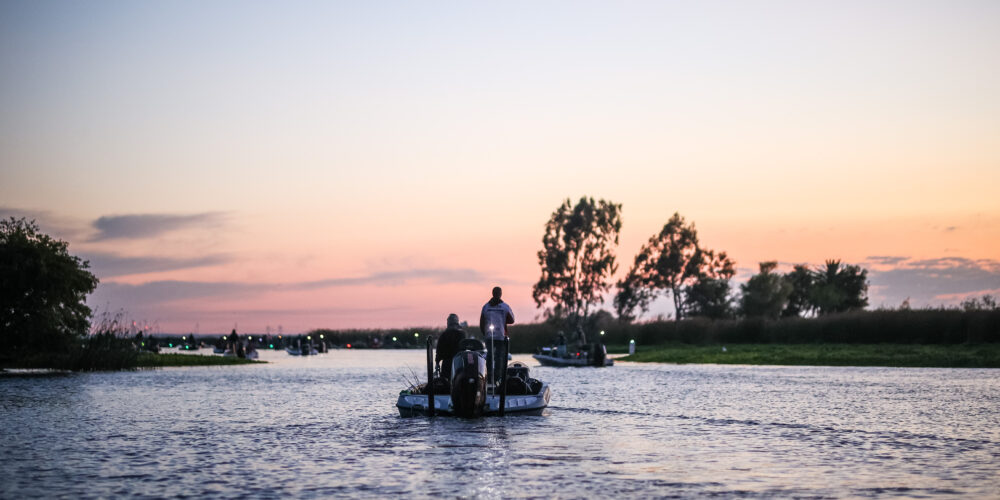 The Toyota Series Presented by A.R.E. Western Division kicked off the second tournament of the season under sunny skies at the Cal Delta. With some of the strongest anglers in the west in the field and good conditions, the legendary fishery could show out for the Toyota Series anglers.

With the Sacramento, San Joaquin, Calaveras and Mokelumne rivers feeding the Delta, there’s no shortage of water to fish. All told, there are about 1,000 miles of navigable waterways that feature all types of bass habitat from natural to manmade.

Since the Delta is connected to the Pacific Ocean, it’s a tidal fishery. That can play a role in the tournament, as veterans of the Delta may choose to run the best tide to capitalize on prime bites, while others may pick an area and hunker down all day.

As usual, the fishing should be good on the Delta, and the frog and punch bite could be lights out.

“I’ve had some of the best days of frog fishing of my life on the California Delta, and I expect the frogging to be just as good come August,” says Jared Lintner. “The Delta has gone through some changes over the last 10 years or so thanks to the diversion of water, but that body of water still can produce a 10-pound bite with any cast you make, and there’s not a lot of places like that in the country.”

Of late, Ish Monroe has been pretty automatic on the Delta, and though he won’t be fishing the event, he’s got a good bead on the fishery.

“There will still be a few guys catching some on spinnerbaits and crankbaits, but the anglers who win will most likely be throwing frogs and punching,” says Monroe. “I don’t expect to see a certain depth making a difference on this fishery, but guys definitely need to be looking for good grass to fish throughout the tournament.”

Summertime regulations mean the tournament day will only be 6 hours, not the usual 8, but weights could still be very good.

Monroe says local Wednesday night tournaments are taking 27 to 28 pounds to win – and those are just five-hour tournaments.

“I anticipate it will take an average of 18 pounds per day to get into the Top 10,” says Monroe. “Anglers will probably need a bag in the mid-20-pound range one of the three days and an average of 20 pounds for the other two days to bring home the win.”

“I have a couple of buddies who are Delta rats, and I’ve been talking to them over the past couple of weeks. I’ve been picking their brain and seeing how the Delta is fishing right now, wondering what it would take for someone to win there. Based on the information I’ve gathered, I really think it would take a three-day total of around 65 pounds to win.”

On the other hand, Delta expert Rob Matsuura says the fishing has been and will be tough, figuring it will take about 33 pounds to make the Top 10. But, Matsuura still thinks the winning weight will be stout, predicting that 62 pounds will take home the big money.

Regardless of the catch, the Delta features some of the coolest scenery in bass fishing and the potential for truly giant bass.