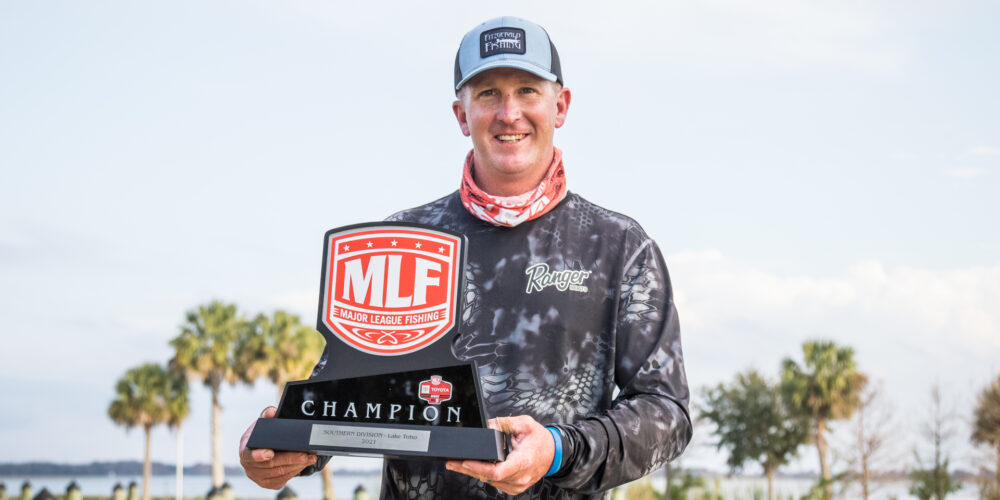 Ask Bryan Schmitt what his favorite kind of lake to fish is, and he’ll tell you any lake that has so much grass that’s it’s overwhelming to most people.

One look at his winning record in the Toyota Series presented by A.R.E and it’s pretty obvious that Schmitt means what he says when it comes to mass grass fisheries. His previous Toyota Series wins include three trophies from the Potomac River, one from the Chesapeake Bay, and another from the James River. In addition, he also has an FLW Tour win on the Mississippi River as well as an FLW Tour runner-up at Lake Okeechobee. And, if you want to involve some smallmouth, you can throw in a Bassmaster Open win on Lake Champlain to boot.

Today Schmitt added his sixth Toyota Series win on yet another vegetation-filled fishery: Lake Toho. With this win, Schmitt now holds the record for most Toyota Series wins and proves that when it comes to fishing grass, he is a master.

Over the course of three days at the Southern Division opener, which was presented by Googan Baits, Schmitt caught weights of 25-9, 22-15 and 18-2 for a three-day total of 66 pounds, 10 ounces. He won the event by an 8-2 margin.

“I am so blessed,” Schmitt says. “I am blessed to have grown up fishing the Potomac River where I had no choice but to learn all the intricacies of grass fishing if I wanted to compete. Those lessons have served me well over the years.”

Massive fields of submerged grass like hydrilla and milfoil can be very overwhelming. Schmitt, however, doesn’t see it as a big weed mass; he sees it as a network of holes, gaps, mats, drains, voids, clumps, points and cuts, and it all makes sense to him.

“Looking out at vast expansive grass flats is like seeing all the pieces to a puzzle and I love taking those pieces and figuring it out,” Schmitt says.

This week the puzzle started with a long, narrow vein of grass that ran out across a vast flat of bare sand and shell in about 6 feet of water. The thin strip of hydrilla was about ¼ of a mile long and terminated into a huge and shallower grass bed in about 3 or 4 feet of water.

“The band of grass grew up about 2 or 3 feet off the bottom and it was clumpy the whole way,” Schmitt says. “When I first found it in practice, I knew fish had to relate to it in some way.”

On the first day of the tournament, Schmitt figured out exactly how they related to it.

“I graphed the entire length of that narrow strip several times and finally found the motherlode where the strip ran into the shallow grass flat,” he details. “There was like an intersection right there.”

In Schmitt’s grass bass brain, he figured that when the cold front hit in practice and the water dropped into the high 50s, many of the bass that had been up in the shallow flat funneled out to deeper water using the thin strip as a travel route to more stability.

His suspicions were confirmed when he began using his LiveScope to scan along the clumpy grass strip and saw big dots swimming everywhere. With that, he picked up a SPRO Aruku Shad 75, in a color aptly named wild shiner, tied it to 15-pound test P-Line Tactical Fluorocarbon and the rest is history.

“The benefit of that LiveScope in grass is unreal,” Schmitt says. “First of all, you can see the actual grass out there before you get to it, that alone is huge. Normally you’re trying to see it with your eyes or get on it with your graph and you get too close. Staying way back and making casts to it is a big advantage.

“Second, you know where to spend more time making casts, because you can see the fish,” he adds. “Finally, you can see how fish react to your lures.”

Schmitt guesses that he saw about 70 percent of the fish he caught on LiveScope before casting to them. On several occasions when he saw fish meander up close to the boat, he pitched the Aruku Shad to the fish, let sink, ripped it up and watched the fish annihilate it on his screen.

He also watched fish take a swipe at the rattle bait on the screen, but never touch it. When that happened, he would resort to a couple of back up lures, including a Missile Baits Quiver Worm (junebug) Neko-rigged on a Hayabusa Weedless Spin Muscle Wacky Hook. He also caught a few on his namesake ½-ounce swim jig called the Lil’ Schmitty (river special) trailed with a Missile Baits Shockwave (shrapnel).

He fished both the Aruku Shad and the swim jig on a Fitzgerald Rods Bryan Schmitt Series swim jig rod.

“I caught a lot of big fish on that Aruku Shad this week,” he says. “I put fresh Hayabusa trebles on it: a #4 on the back and #5 on the front. The very first fish I hooked this morning was that 9-pounder and she stayed pinned the whole way.”

With a fresh trophy secured in his truck, Schmitt now heads north to the St. Johns River for his next event. He’ll do so with a list of accolades that put him in rarified air – the unofficial title as the best tidal angler alive, more than $920,000 in career earnings with MLF and a whopping six Toyota Series wins.