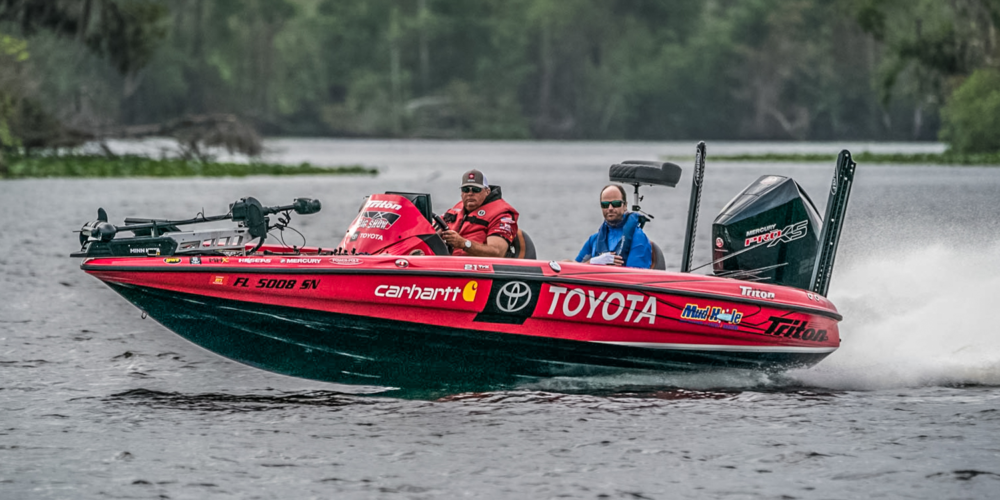 PALATKA, Fla. – The sight of MLF pro Terry Scroggins’ bright red, Toyota-wrapped Triton flying up and down the St. Johns River should come as no surprise to anybody who fishes this northcentral Florida big-bass factory. The longtime pro calls Palatka home, and fishes the St. Johns upwards of 100 days a year.

So when the 2020 FLW Toyota Series Southern Division schedule came out and “Big Show” noticed the St. Johns tournament and its Feb. 13-15 date – which fell neatly between Bass Pro Tour Stages One and Two on Lake Eufaula and Lake Okeechobee – he signed on the dotted line for his first FLW tournament since 2012.

“I thought ‘Why not? That should be a fun ol’ tournament’,” Scroggins said the day after finishing 14th at the St. Johns event with 30 pounds, 3 ounces. “I saw that I had a little opening in my schedule, and I’ll fish a tournament on that river any chance I can get, so I jumped in on it.”

Scroggins finished up his Group A final Qualifying Round at Eufaula and made the 6-hour drive back home to Palatka to practice the following day. The Mercury pro weighed in 14-5 on Day 1 of the event and 15-14 on Day 2, and broke off a bed fish on the first day that he estimated at 8 pounds: “She was under a dock, and I knew it would be tough to get her out. When I hooked her, she wrapped around a piling about three times and that was that.”

“I’d fish the second event – on Lake Okeecobee – too, but that’s right in the middle of our (Bass Pro Tour) event on Lake Fork,” Scroggins admitted. “I really enjoyed that St. Johns event, it was good to be out there.”