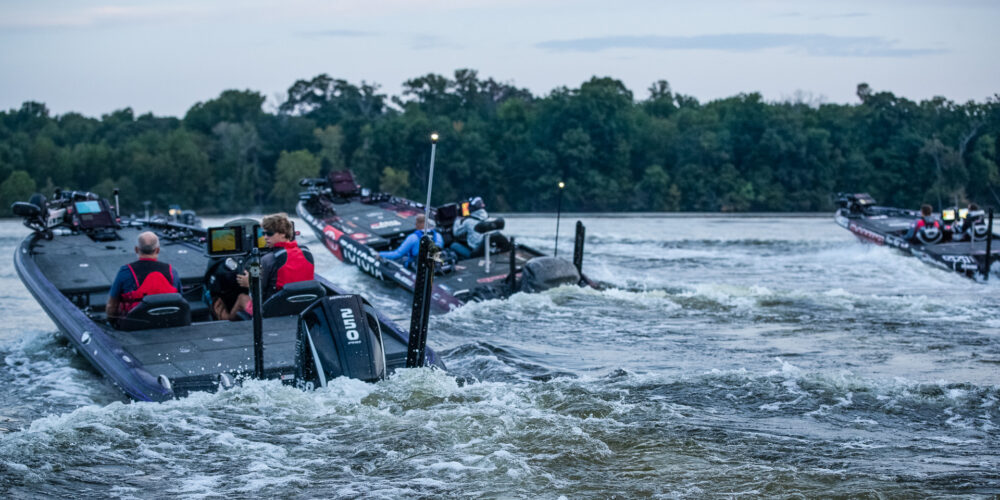 The Toyota Series Presented by A.R.E. Northern Division started at Lake Champlain and then headed to the St. Lawrence for two tournaments that featured a nearly infinite amount of quality fish. Wrapping up at the Potomac River will require a shift in mentality – though the worst doom and gloom from practice isn’t likely to pan out as totally true, quality fish will still be at a premium, and anyone culling a 4-pounder this week will be able to brag about it for a long time.

Running roughly north to south, the Potomac is a major tributary of the Chesapeake Bay. Up above Washington, D.C., the river is shallow, rocky and home to some smallmouths – below that, the tide begins to take effect and the river broadens out. Where most tournaments are won, from about D.C. in the north to Potomac Creek in the south, there is a healthy population of largemouths living anywhere from the very backs of creeks to the grass beds smack on the main river.

Jacopo Gallelli won this spring’s Tackle Warehouse Pro Circuit Presented by Bad Boy Mowers stop on the Potomac River with a vibrating jig in milfoil, and milfoil wasn’t hard to come by then. Since then, the river has filled in with star grass and hydrilla to an incredible degree, making the milfoil and eelgrass pretty difficult to actually target.

The Potomac varies a lot throughout the year, and generally, late-summer events are a lot tougher than spring and early-summer events. One saving grace for this one might be the weather forecast – after a hot summer and a hot practice, the highs are set to be in the low 80s for the event. With the water temperature in the river running about 78 degrees in practice, it’s likely that temp actually drops some as the event goes on.

Bryan Schmitt is perhaps the foremost tidal angler in the field and a longtime hammer on the Potomac. According to him, the cooler weather should help, but perhaps won’t change the game.

“Guys will do very well early in the morning,” says Schmitt. “We’ve got a pretty nice tide early. There will be a lot of topwater – [poppers], Spooks, frogs, buzzbaits, that will be a big deal. And, I think it’s going to get prolonged – we’ve got some clouds and a little bit of rain coming. The grass bite should be good, usually, on a fishery like this that’s been sunny forever and dog days of summer, when you get a little bit of weather like that, they bite. I don’t think it’s magically going to be all these big bags, but I think the weights will be better than if it was just a normal September bluebird day.”

With the potential for grass, hard cover and the backs of creeks to play, Schmitt thinks the grass is the place to be.

“I think with the amount of habitat in the river now, when you have that kind of scenario, the hard cover doesn’t play as good, neither do the creeks per say,” says Schmitt. “When you take all that grass away and there are a couple years of lower grass growth, that stuff plays more. Now, there’s so much grass, and they want to be in it. But it makes it difficult, because there is so much, and it’s so thick, in some places you just can’t get to them. But, the bulk of the fish are in the grass and in those big bays and creeks.”

A similarly amazing tidal angler, Mike Iaconelli thinks it will be tough sledding.

“I’ve fished this place since the early 90s, I’m an old guy now, and it is the single toughest practice and look at the river I’ve ever had,” says Iaconelli. “September is always the hardest month here, it’s always challenging, but, I think circumstances are making this week even tougher. We had a big storm a week ago that really made the system turbid, we had a heatwave, the vast amount of hydrilla is having an effect. It’s tough.”

A regular on the Potomac, Cody Pike says that there’s the potential for fish to be very grouped up in the fall on the Potomac. Iaconelli agrees with him on that front.

“The flip side to it being absolutely brutally tough out there is that when you do find them, there’s a bunch there,” Iaconelli says. “It’s not like there’s one here and one there – they’re really grouped up right now. Again, that’s very typical of September – bunches of fish in smaller areas.”

Like Schmitt, Iaconelli thinks the grass is going to do the bulk of the work.

“If I had to break it into a percentage, I would say its 60-40,” he says. “I think about 60 percent of the success guys will see will be around soft cover – the grass. I think the 40 percent will be around the hard cover.”

Matt Becker, who is leading Angler of the Year in the Northern Division, says he has confined his practice to the grass and the creeks because of that same expectation.

“I really don’t have the patience for the hard cover stuff,” says Becker. “You have to fish it so slow and methodical, and experience plays a huge role in that. If you know a dock or a structure is good, you can really take your time and fish it. But, not having any experience doing it, I really haven’t messed with it.”

Of course, Schmitt is one of the premier grass anglers in the world, and Becker eschewing the hard cover pattern doesn’t mean it won’t play. We’ve seen Marvin Reese win off hard cover in recent years, Iaconelli certainly has a spot or two to run, and there are plenty of pros with lots of experience on the Potomac who doubtless have a bit of a milk run in place.

The Potomac isn’t a huge mystery when it comes to baits – over the years, grass baits, topwaters and some finesse options have won a ton of money on it. This time of year, Pike isn’t straying too far from the staples.

“If a guy can figure out how to catch them on that swim jig, that’s what’s going to get the better bites,” says Pike. “I’d probably have a swim jig, a Senko and a 1 ½-ounce weight tied on.”

Topwater sounds like it could be a big factor this week, which is no huge surprise. In addition, crankbaits have caught fish on the Potomac as well, especially in the smaller creeks and around hard cover. Flipping jigs are also great options, especially around docks and rocks.

Last September, under similar conditions, James Maupin won the Toyota Series Eastern Division event with a 40-11 total. This time around, most of the predictions are in the same ballpark.

“I did catch five yesterday, and I would have had like 7 pounds,” says Becker. “I would say 12 pounds a day is going to be pretty dang solid. If you can catch a couple 2-pounders and a 4-pounder, or something like that, that’ll be a good day.”

Kurt Mitchell, who has mastered close calls on the Potomac, reckons that 38 pounds will win.

Iaconelli figures on the same range as everyone else.

“As tough as it is, I still think your upper 10 percent of the field will still catch them like they normally do,” he says. “In my years here, most September tournaments, if you have 12 to 15 pounds, that’s a dominating day. If you can get into the teens, that’s hard to beat over three days. You might see a guy crack 17 or 18, but then they won’t back it up.  You’re gonna see a ton of zeroes in this one, you’re gonna see a ton of onesies and twosies. I had three and a half days of practice – two of the days, I never touched a bass.”

Ever the optimist, Schmitt is going a bit higher.

“It’s gonna be like last year, not terrible,” says Schmitt. “I think a little over 40 pounds, maybe 42 pounds, I think it’s going to be very similar weights. It seems like about three weeks ago it got really, really stingy. Leading up to that, it’s been a really good year, obviously, you saw what they did in the [Pro Circuit] – that’s a lot of fish. They’ve just got bigger since then, but for whatever reason, they’re really tough to catch this time of year.

“The big difference-maker this week is going to be a big bite or two for one angler,” says Schmitt.  “Somewhere on this river right now, this is a 20- or 30-yard stretch that has big ones. You kinda saw it in the [Pro Circuit], there was a lot of heavy 3-pounders caught that were postspawn skinny. They’re now 5-pounders.”