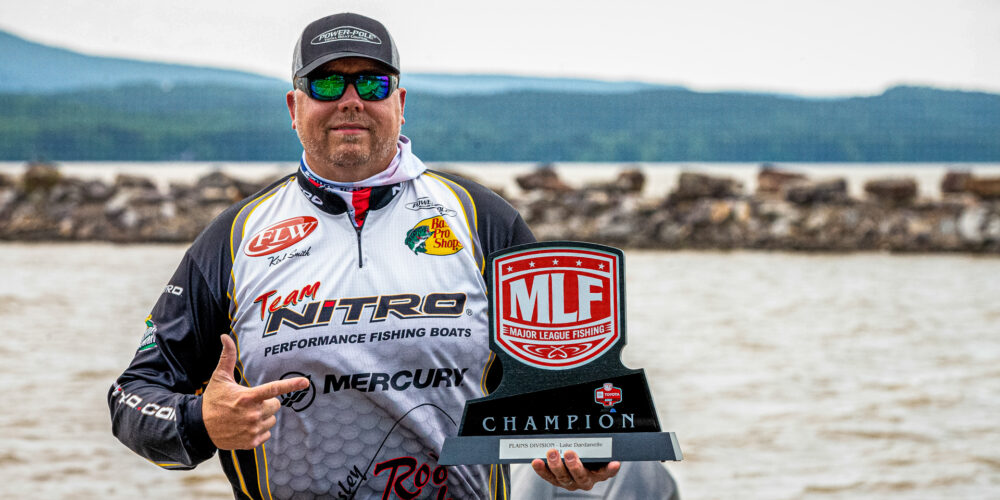 He considers himself an offshore and electronics geek. That combo is exactly how Kirk Smith blew it out on Lake Dardanelle.

From the very first morning of the Toyota Series Presented by A.R.E. Plains Division finale, it was apparent the Oklahoma pro was on something special. The majority of the field’s success seemed to go up and down with the water levels and clarity, with anglers scrapping plans constantly amidst the changing water conditions. Catching limits or even getting bites was never guaranteed.

That is, except for Smith. He had a pattern like no one else that allowed him to lay off early the first two days and still be leading by an ounce. Today, he finally got to show off what that pattern could do, bringing in 19 pounds, 15 ounces – the second-largest bag of the event – to blow away the field by 6 pounds with a 51-3 total.

“I never knew what I had (with my pattern), because I was letting up on on Days 1 and 2,” says Smith. “Today, I absolutely unleashed the fury on them and just mashed them as hard as I could. Even I’m impressed with what I had.”

What he had was a truly unique pattern.

In practice, he says he was breaking limbs and getting covered in spiders trying to find secret backwaters like many other pros, but it just wasn’t happening. Yet, while idling out of a pocket after trying to find something no one else found, he inadvertently found something most people found but simply overlooked.

“I was watching my side-imaging and noticed this little underwater point of grass and that’s when it all started,” says Smith. “I threw a waypoint on it and said, ‘huh, that looks good,’ but I didn’t know exactly where it was. So, I got up on the trolling motor and realized it was 15-20 feet off the bank. That’s when a lightbulb went off. The guys were either on the bank or the guys offshore were way offshore, out too deep. I knew no one else would be fishing that.”

Fishing mainly in the Shoal Bay and Thompson Creek area, Smith found grass points, isolated stumps and isolated stumps with grass (the best) that were far off the bank but not deep, and were not getting hit by anyone else. Best of all, he realized today those spots were reloading thanks to the falling water. It was just a matter of precisely hitting them. Something he’s quite adept at doing thanks to his prowess with Lowrance ActiveTarget.

Much like pros do over open water, he’d get in an area and troll around while watching his electronics for stumps and isolated grass patches. When he saw one, and if he saw a fish on it, he could nearly call his shot tossing a prototype ½-ounce BOOYAH swim jig with a Zoom Super Chunk trailer (both black-and-blue).

“I’m not much of a swim jig guy,” says Smith. “I’m a ¾-ounce, 25-feet of water guy. But getting that bait down there and swimming it, getting kind of aggressive with it was a big, big thing.”

The results spoke for themselves. On Day 1 he had a limit by 8:58 a.m. before laying off. On Day 2 it was 8:56 a.m. Today, he had a limit by 8:13 a.m. and never looked back, especially after an adjustment to some slightly deeper isolated cover he’d marked around midday produced a 5-12 kicker and another 4-pounder. After that, the tournament was pretty well over.

“It’s been a magical week,” says Smith. “I was talking to a buddy from the Muddy Water Mob before the week. I told him I’m feeling warm and fuzzy about this tournament. I can’t explain it, because when I saw this tournament on the schedule this year … Lake of the Ozarks, I can compete. Grand Lake, I can compete. Dardanelle, I thought I could just survive. So, winning this is just amazing.”