Smith Leads by an Ounce After Day 2 at Dardanelle 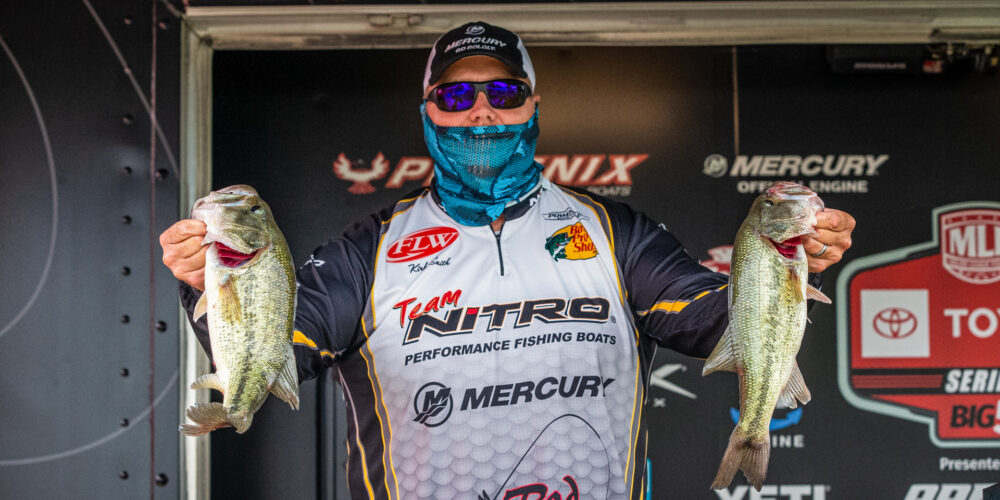 One of the most consistent things about Lake Dardanelle, is how inconsistent it can be. Just look at the leaderboard of the Toyota Series Presented by A.R.E. Plains Division finale.

Jeff Kriet caught 7 pounds, 7 ounces yesterday. Today, he cracked the biggest bag of the event, 20-10 – a bag many locals speculated was the biggest the lake had given up in months. Meanwhile, BJ Miller fell from fourth to 10th, and he was lucky to hang on. At midday, he didn’t have a fish, and he only brought three to the stage. Fortunately for him, one of the trio was over 6 pounds.

And then there’s Kirk Smith once again bucking the trend. Yesterday, most everyone was junk fishing while he ran a pattern for 15-12. Today, he showed that pattern is still going strong, bringing in 15-8 to give him the lead by just an ounce over Zach King with 31-4.

And if those weights weren’t consistent enough, how quickly he’s catching them sure is, too.

Fishing things “most everyone is overlooking,” Smith has been able to catch them “fast and furious” each of the last two mornings. He figures he caught nearly a dozen keepers today and culled a handful of times. Yet, the ultimate luxury was basically shutting it down by 10:30 a.m. to start looking around for more of his special, overlooked stuff.

Of course, considering how slim his margin is over King and the rest of the Top 10, he just hopes he made the right decision.

“I hope I did the right thing,” Smith says of laying off the gas. “I’ve never fished a tournament like this where I don’t think they’re reloading, and it’s going to be a deal where I wonder if I saved enough fish.”

Fortunately for him, he says he’s saved a lot of water, including some key areas he’s quite excited about for tomorrow. “Tomorrow, I’m hoping for a really big day because I’ve been saving so much stuff.”

It just comes down to whether or not his consistency can buck the Dardanelle trend one more day.

Andy Newcomb had two goals before his first full season in the Plains Division: Win a tournament and win Angler of the Year. He did the first at Grand Lake. Today, he accomplished the second.

By bringing in 14-7 today, he locked down his third Top 10 of the season (and fourth Top 10 in a row dating back to 2020) to cap off a sterling season that will have him heading to the Tackle Warehouse Pro Circuit with a full head of steam in 2022.

A co-angler’s fate rests in the hands of his pro’s game plan. Well, Michael Carter’s fate was a scary one, at least to start.

Fishing with Erick Hurst on Day 2, the two went for quite the boat ride, actually leaving Lake Dardanelle and locking up into the Arkansas River. Unfortunately, the big risk was a big miss, as neither caught a fish before locking back down around 10:30 a.m.

Fortunately, that’s when the Strike King co-angler took fate into his own hands a bit.

“We went back in some sloughs, and he was catching them on a shaky head,” says Carter, who leads with 19 pounds, 8 ounces total. “I was beating myself up saying ‘why am I not throwing a shaky head’ because that’s what I love to throw. So, I finally picked up a shaky head and almost immediately caught my big one, a 4-14.”

While he only managed three fish on the day, they were the right three to put him in position to win. He’s just hoping for a better final day than the last time he was in this position.

“I don’t know if I’m excited or nervous,” says Carter. “Last time it didn’t work out, and I fell from third place to sixth. But if it’s the good Lord’s plan, it will happen for me tomorrow.”