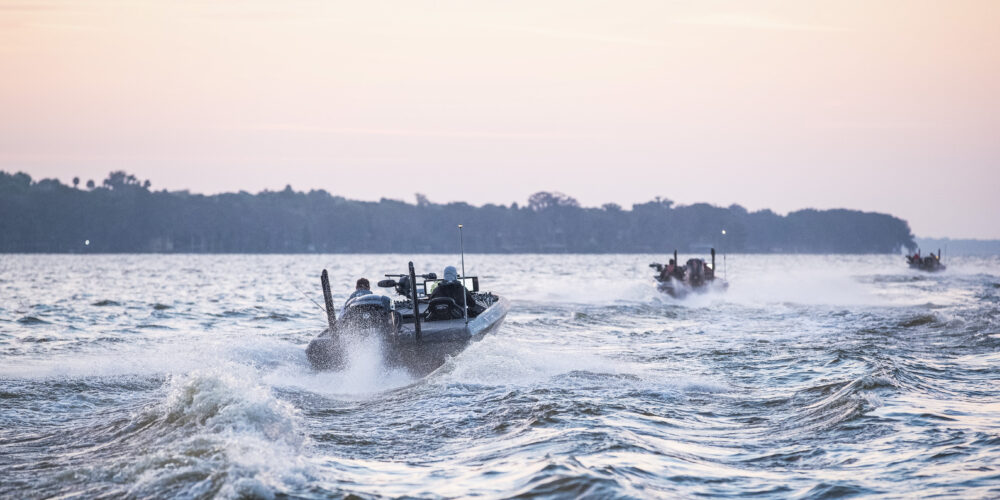 The Toyota Series presented by A.R.E. begins its second stop of the Southern Division on the Harris Chain of Lakes this morning. In all, 161 boats are taking off onto the balmy waters in Leesburg, Fla.

Even though it’s still only mid-March, anglers have found the Harris Chain to be shedding spring and heading into early summer. Lake vegetation and algae blooms are already flush in the warm waters. Bass are mostly done with their spawning cycle and now looking to prey on forage species like shad and bream that are just now starting to spawn.

The Harris Chain of Lakes in Central Florida is somewhat like an amusement park of Florida bass fishing, offering up to 10 different lakes to fish and plenty of weedy real estate to cast at. In all, the 10 lakes total some 50,000 acres of water that includes open water, canals, rivers, creeks, swamps and sloughs. If you don’t care for what one lake offers, just jump over to the next one.

The four biggest lakes in the system include Lake Harris (and Little Lake Harris), Lake Griffin, Lake Eustis and Lake Apopka. All of these lakes have big open basins that average 10-12 feet and are known for harboring bigger populations of bass than the smaller ponds such as Beauclair, Carlton and Horseshoe.

The Toyota Series will launch in Lake Harris but anglers will be allowed to fish any of the other lakes in the chain. Leaving Harris, however, requires giving up fishing time to navigate through extensive idle zones, canals and small locks. The longest of the commutes would be either a trip to Lake Apopka (about an hour and 15 minutes) or a trip to Lake Griffin (nearly an hour). Either journey requires multiple idle zones and passing through at least one lock.

Historically, the Harris Chain of Lakes usually meant fishing Kissimmee grass beds, big fields of lily pads, canals or backwaters. Over the last decade, however, offshore fishing has proven to be a successful approach in all seasons. An abundance of hydrilla in the main basins of Harris and Griffin has given rise to a healthy population of offshore bass. In addition, vast improvements in electronics have helped anglers find subtle offshore hotspots where bigger fish live.

With several spawning cycles already complete this year, it’s a good bet that postspawn fish will be ganging up somewhere offshore.

While the ice in some lakes across the Midwest and Northeast is just starting to thaw, Central Florida is about to reach summer-like conditions. Temperatures in the region this week have been in the 80s and highs in the 90s are likely later this week.

Water temperatures in Lake Harris have reached the 75-degree mark and the big recreational boats are already out in full force. Water levels are normal and the warmer waters have given rise to various algae blooms that give the Chain of Lakes a fertile green color.

While there are likely a few scattered bass still on beds, the chain is mostly postspawn and transitioning to summer. With that in mind, main lake grass beds and offshore shell bars will likely be where a lot of the action goes down. The shad spawn has already led to schooling activity in most of the lakes. This week bream bed patterns might develop with the new moon on Saturday.

Local favorite Tim Frederick of Leesburg, Fla., believes Lake Harris and Lake Griffin will be the primary players this week. Both lakes have deeper, offshore grass beds that are home to summertime bass.

“Lake Harris is mostly postspawn, but Griffin is a bit behind offering more fish in the spawn phase,” Frederick says. “Griffin has the healthiest grass right now. If a guy can find some offshore grass where bass are still spawning out deeper, they could have the best of all phases: spawn, postspawn and maybe even a bit of prespawn. I’m betting about 50 percent of the boats will go to Griffin at some point in the tournament.”

Format: All pros and Strike King co-anglers will compete for two days. The top 10 pros and co-anglers based on cumulative weight after two days of competition will advance to the third and final round, with the winner in each division determined by the heaviest cumulative three-day weight.