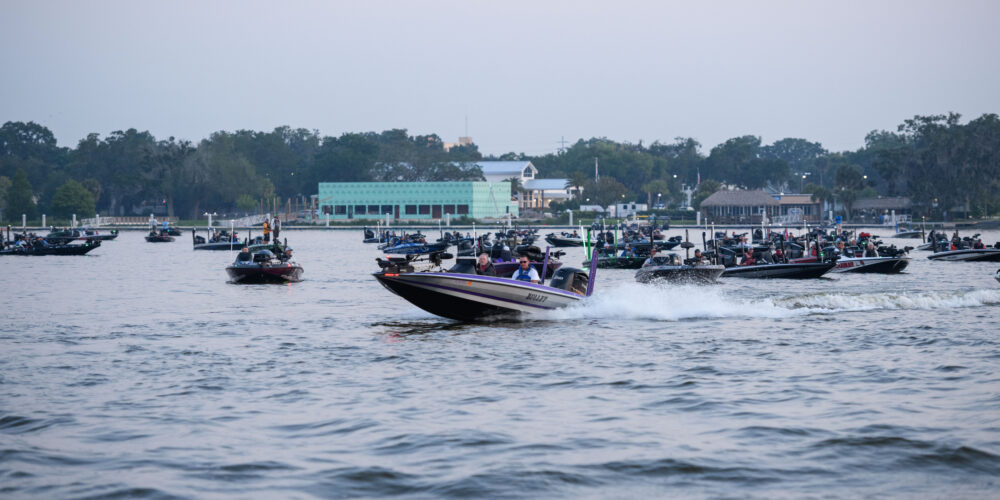 LEESBURG, Fla. – The Toyota Series Presented by A.R.E. begins its third and final stop of the Southern Division on the Harris Chain of Lakes this morning. In all, nearly 200 boats are taking off into Florida’s heat and humidity. With temperatures slated to reach into the low 90s today, it’s safe to say summer is in full swing in the Sunshine State.

This event marks the third time MLF has conducted an event on the Harris Chain in 2022. On March 5, the Phoenix Bass Fishing League sampled the Chain. Two weeks after that, the Tackle Warehouse Pro Circuit had a go on the multiple-lake system. Now it’s the Toyota Series’ turn.

A lot has changed since March on the Harris Chain. Bass are done spawning and many of them have retreated to offshore humps and shell beds to spend the summer. Christian Greico of Tampa, Florida, won the Pro Circuit event back in March and is now looking for a Toyota Series trophy to keep his Pro Circuit trophy company. According to Greico, no particular lake on the Chain has a dense mass of healthy grass to make it stand apart from the other lakes. He said some remnants of a shad spawn are still going on early in the mornings and bream beds will likely be a player later in the day. In all, he thinks the near 200-boat field will spread out considerably across all of the lakes in the chain, with no one lake drawing a majority of the boats.

The Harris Chain of Lakes in Central Florida is somewhat like an amusement park of Florida bass fishing, offering up to 10 different lakes to fish and plenty of weedy real estate to cast at. In all, the 10 lakes total some 50,000 acres that includes open water, canals, rivers, creeks, swamps and sloughs. If you don’t care for what one lake offers, just jump over to the next one.

The four biggest lakes in the system include Lake Harris (and Little Lake Harris), Lake Griffin, Lake Eustis and Lake Apopka. All of these lakes have bigger open basins that average 10 feet in depth and are known for harboring bigger populations of bass than the smaller ponds such as Dora, Carlton and Horseshoe.

The Toyota Series will launch in Lake Harris, but anglers will be allowed to fish any of the other lakes in the Chain. Leaving Harris, however, requires giving up fishing time to navigate through extensive idle zones, canals and small locks. The longest of the commutes would be either a trip to Lake Apopka (about an hour and 15 minutes) or a trip to Lake Griffin (nearly an hour). Either one requires multiple idle zones and passing through at least one lock.

Historically, the Harris Chain of Lakes usually meant fishing Kissimmee grass beds, big fields of lily pads, canals or backwaters. Over the last decade, however, offshore fishing has proven to be a successful approach in all seasons, thanks largely to vast improvements in electronics, helping anglers find more subtle offshore hotspots.

Grass control is always a factor at the Harris Chain: some years the hydrilla goes unchecked, growing in lush mats, which clears the water quickly. In other years, grass control measures are instituted to kill the grass back, removing that filtering effect. This process cycles around the Chain from year to year making some lakes better than others some years and vice versa. Going into this summer, none of the lakes appears to have that lush, healthy grass advantage.

Though reports indicate a few shad are still spawning around the banks throughout the Chain first thing in the morning, it seems to be short-lived. The common theme this week will likely be, “outside and offshore.” As in flipping the outside of the Kissimmee grass and dragging soft plastics on offshore humps, shells bars and brush.

Catching release fish – There have been multiple large tournaments out of Lake Harris over the last five months. Hundreds of fish have been transported from the Chain’s other lakes to the popular Venetian Gardens launch area via livewells. This would seem to only help augment the population in Harris proper.

Takeoff is early – The Toyota Series launch will commence each morning at 6:30 a.m. ET. This is an hour earlier than events held earlier in the season due to safe daylight. This might help a few anglers cash in on the shad spawn in the first 30 or 40 minutes of the day.

Balancing boat numbers – Boat number draw is always a critical factor at The Harris Chain. Early draws will get the first pickings of low-hanging fruit in Harris and Little Lake Harris; while late draws favor those who want to spend time traveling to Dora, Beauclair and even Apopka.

Clouds and rain – The forecast going into the weekend calls for a generous chance of rain for Friday and Saturday, which could open the door for some different patterns.

Several anglers say the clearest water in the Chain resides in Dora and Beauclair and consequently will likely draw a lot of boats in that direction. The word on Griffin is that the watercolor is almost a pea soup green with limited visibility, which could deter large numbers of anglers from going that way.

Despite limited grass and watercolor, anglers still contend big bags will be weighed in during the event. Several local tournaments have taken upwards of 27 pounds to win, so big bass are cooperating. Greico believes an average of 14 pounds per day will earn a pro a ticket to the Top 25 on Saturday and that it will take a bit over the 60-pound mark to win.

Given the extra cash on the table, Stalvey spent a couple of extra weekends practicing for the event.

“It’s more than just the money to me,” Stalvey said. “I want to prove myself as more than just a good bed fisherman in the spring here on the Harris Chain. I’ve won early spring events over here when the fish are on beds. But I’m learning this offshore game as well. So, if I could do well enough to clinch that AOY title it would mean a lot to me, in terms of being a more versatile angler.”