Thompkins on Cruise Control at the Harris Chain 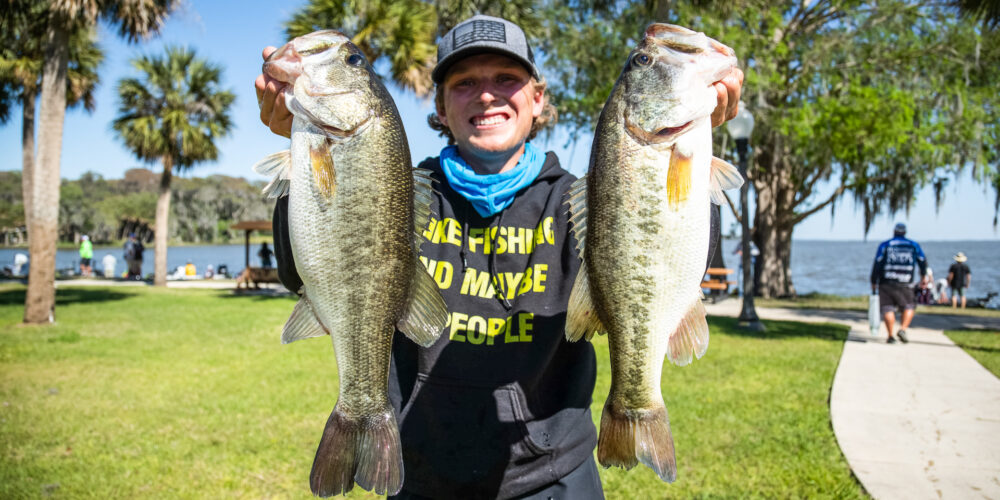 Jordan Thompkins may be 19-years-old, but he showed maturity well beyond his years today as he navigated his way through a cluster of adversity and distractions on the Harris Chain to maintain his composure, and his lead, in the Toyota Series presented by A.R.E. Southern Division event.

Some of Thompkins’ obstacles are a result of his chosen fishing location, which happens to be inside a busy passage canal where back-and-forth boat traffic is a constant. In addition, a handful of anglers are fishing the same area in close proximity. Also, you might as well throw in a plethora of floating grass that gravitates to his area due to wind and current and fouls about half his casts.

Through it all, Thompkins blocked it out and made the best presentations he could manage in between boats and through the pesky flotsam. His perseverance was rewarded with 15 pounds, 7 ounces of bass, giving him a two-day total of 46 pounds, 13 ounces. He now takes a lead of more than 11 pounds into the final day.

Thompkins fished his primary spot for about an hour and caught his first limit there.

“It’s just a place where grass tapers off onto a hard spot and there are a bunch of fish there,” he says. “But with all the traffic going on, the fish just wouldn’t set up right like they did yesterday. The school stayed busted up with all the traffic and different lures pulling the fish in all directions. Once I got a limit, I had enough of the silliness and I left and came back into Harris to fish some different stuff; I ended up culling out three fish.”

Once in Harris, Thompkins ran a gamut of everything from more offshore spots to sight-fishing in canals.

“I almost have too much stuff going on at this point,” he says. “After fishing in Harris, I started to feel a little too spread out. I’m new to this game and one of the things I’m working on is fish management in multiple day events. With so many days and so many places, it’s easy to get too much going on in my head at one time.”

The good news for Thompkins is the field has now been cut down to the Top 10, which means he will have far less pressure in his area tomorrow.

“I hope to put it away in that canal tomorrow,” he says. “There are a bunch of fish there and if they’re left alone and I can rotate them like I need to. I think I can catch them again – maybe not 31 pounds, but a big bag still lives there.”

In the Strike King co-angler division, 17-year-old Fisher Cusic of Lakeland, Fla., leads the pack with a two-day total of 32 pounds, 4 ounces. Cusic caught a respectable 12 pounds, 5 ounces on Day 1 and backed it up with an impressive 19 pounds, 15 ounces on Day 2.

“I caught most of my fish on a ChatterBait in deep hydrilla,” he says. “I was just reeling it over the tops of the deeper grass and they would eat it.”