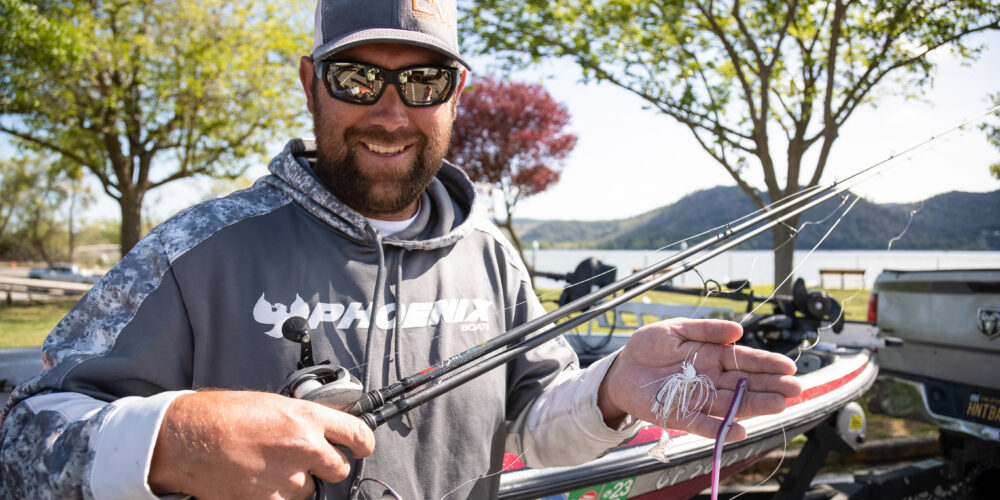 CLEARLAKE, Calif. – Varying weather that included everything from high winds to clear skies with post-frontal conditions posed a plethora of challenges for the field at Clear Lake for the Toyota Series Presented by A.R.E. Western Division’s second stop.

With every phase of the spawn a factor, it’s no surprise that a variety of West Coast staples peppered the Top 10.

Here’s what got it done for the top pros out on Clear Lake.

1. After getting blown off his fish on Day 1, Bryan Grier stuck to his guns, firing up his school of prespawn fish all week on either a 7-inch Osprey Inline Tournament Talon in light hitch color or a Daiwa Yamamoto Neko Fat Worm in green pumpkin black flake. Grier also mixed in a Ned rig (also tipped with a Neko Fat Worm). He threw his trio of tactics on a variety of Kistler rods.

2. Joshua Adams adjusted with his fish all week, taking home runner-up honors by targeting prespawn fish early in the event before doing some sight fishing on the final day. Adams targeted his prespawn fish by casting a 4.8-inch Keitech Swing Impact FAT (ghost rainbow trout) on a 3/0, 3/16-ounce Owner Flashy Swimmer. For his bedding fish, Adams worked them over with a ¾ ounce Megabass Dark Sleeper (haze color) and a Reaction Innovations Sweet Beaver (sprayed grass) pegged on a 1/8-ounce weight. Adams reportedly would fire up his bedding fish with the Dark Sleeper before getting them to commit on the light-falling Texas rig.

3. Kyle Grover continued his solid string of finishes at Clear Lake by taking home third place, aided by an army of Roboworm Straight Tail Worms in just as many colors. Margarita mutilator, morning dawn and Aaron’s magic were all responsible for bringing fish to the scale this week. Grover threw his worms on three identical 7-foot, 1-inch medium St. Croix Victory spinning rods, each one paired with a Daiwa Certate LT.

4. Daniel Andrusaitis locked by junk fishing all week. His bait of choice to do so was a 3.8-inch Keitech Swing Impact FAT in a variety of shad colors. He also mixed in a drop-shot, Neko rig, and wacky worm to secure his finish.

5. Scott MacKenzie sight fished his way to his second Top 10 finish this week. He worked over his spawners with a Roboworm Straight Tail Worm (margarita mutilator) on a drop-shot. He caught a few additional fish on a shad imitator (also rigged on a drop shot) and a chartreuse tube. MacKenzie also targeted staging fish with a Duo Realis jerkbait when he wasn’t leaning on his sight fish.

6. Ronald Lorenzo also sight fished his way through the week, braving the wind and waves on Day 1 to reach his fish, and doing so again each day thereafter. Lorenzo’s two-pronged approach was straightforward, with the first being to pitch a ¼-ounce Bass Pro Shops Enticer Jig tipped with a 5-inch Kalin’s Lunker Grub. His backup was a drop-shot with a 6-inch Roboworm Straight Tail Worm (Aaron’s morning dawn). He threw the jig on a Falcon BuCoo casting rod and the drop-shot on a BuCoo spinning rod.

7. Jordan Collom got his fish to react all week targeting staging fish with a 3/8-ounce Z-Man/Evergreen ChatterBait Jack Hammer (spot remover) paired with a 3.8-inch Keitech Swing Impact FAT in crystal shad. He threw it on a 7-foot, 3-inch medium-heavy Phenix Maxim with a 6.3:1 Daiwa Tatula SV. He also caught fish on a 3/0, 3/16-ounce Owner Flashy Swimmer rigged with a 3.8-inch Keitech Swing Impact FAT on a Phenix Compsite X Series rod (X13) with a 7.2:1 Tatula.

8. Patrick Touey backed up his March win at Lake Havasu with another Top 10 finish at Clear Lake. He went to work targeting bedding fish with true West Coast tactics. To fire up fish on a bed, he threw a custom glide bait made by fellow competitor Gary Collins, which he tossed on an 8-foot, heavy-action iRod Genesis III. He then threw a white 5/8-ounce Arkie-style jig paired with a white Zoom Ultra Vibe Speed Craw to catch the fish he had triggered on the glide bait. The jig was rigged on a 7-foot, 5-inch, heavy-action iRod Air with a Shimano Curado K 201XG spooled up with 20-pound fluorocarbon.

9. David Valdivia caught his fish on shallow flats by pitching or casting his drop-shot to grass patches he found fish relating to. He also would stop on bedding fish as he located them to work them over. Valdivia slung his drop-shot on a Performance Tackle 70 XF paired to a Shimano Vanquish spooled with 8-pound Daiwa J-Braid to an 8-pound leader. His secondary pattern was pitching a Texas-rigged 5-inch Yamamoto Senko with a 3/16-ounce weight on a Performance Tackle 72 JRS “Jig Special” rod.

10. Justin Kerr snuck into the Top 10 for the second event in a row as he continues to fish well in MLF and local events across the West. Kerr did his damage on Day 1 with a bluegill-colored Z-Man/Evergreen ChatterBait Jack Hammer with a blue watermelon Zoom Super Fluke for a trailer rigged on a prototype Evergreen rod. On Days 2 and 3, Kerr ran to bedding fish he found in practice, pitching to them with a 3.5-inch Roboworm Zipper Grub (bed bait 2 color) rigged on an Evergreen Combat Stick.