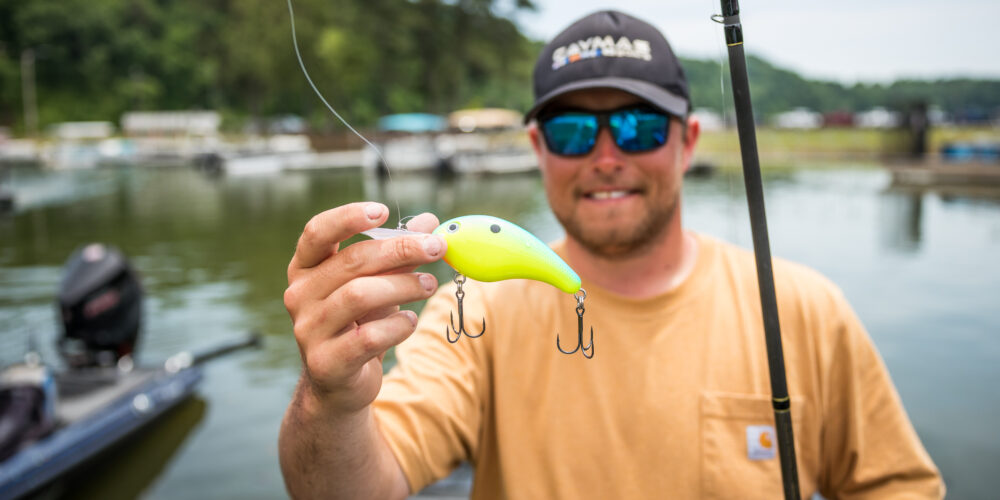 The Toyota Series Presented by A.R.E. Central Division finale on Lake Chickamauga was not easy fishing. In fact, three of the Top 10 pros failed to limit on the final day, and nobody really came close to averaging 20 pounds a day, even for two days. With ledge fish tricky to trigger and shallow bass scarcer than they usually are in May on Chickamauga, the Top 10 needed a variety of baits to get the job done.

If you’re headed to Chickamauga in May, you might want to bring the following baits along.

For his crankbaits, Hartman says the color didn’t matter – it was more about the right cast or getting an aggressive bait to deeper fish.

2. Mixing deep groups of fish and a key shallow school, Seth Davis put a Strike King 10XD and Azuma Z Boss 20 to work on the cranking side, casting and sometimes long-lining to reach deeper fish. Shallower, the Chickamauga local did most of his damage on a Neko rig with a Big Bite Baits Trick Stick.

3. With two of his biggest bass coming off a bed, Miles Burghoff put a varied game plan together on the week. For his sight fish, Burghoff used a Z-Man Boar HogZ Texas-rigged on a 3/0 Hayabusa WRM959 hook with 20-pound Seaguar AbrazX. Offshore, he mostly relied on a reaction bite with a Strike King 5XD with 2/0 Hayabusa TBL930 trebles on 12-pound Seaguar InvisX. To clean up, he tossed a Z-Man Big TRD on a 3/16-ounce Z-Man Shaky HeadZ.

4. The highest finisher to stick shallow the whole time, Tommy Brown went with a Little Creeper All American Sunfish to catch bedding bass and also mixed in a Zoom Fluke and a vibrating jig.

5. Also staying shallow, Jeff Dyer put a pair of jigs on the deck and covered water. For a swim jig, he went with a Strike King Hack Attack Heavy Cover Swim Jig with a Keitech Swing Impact FAT trailer. Around bedding bass and to mix things up, Dyer used a flipping jig with a Strike King Rage Craw.

7. Also working a combo platter, Joseph Webster did his damage with a Berkley Dredger 20.5 and a drop-shot with a 6-inch Roboworm Straight Tail Worm in Aaron’s morning dawn.

8. Andrew Nordbye sputtered on the final day, but did a lot of damage the first two days on a shaky head with a finesse worm that he souped-up with Tightlines UV Fish Bomb Scent in the garlic flavor.

9. Cody Harrison fished deep and a shad spawn this week with a variety of baits. His two best producers were a True Bass Shuttlecock Hair Jig and a ½-ounce Z-Man/Evergreen ChatterBait Jack Hammer with a 7-inch Castaic Baits Jerky J Eels.

10. Staying shallow all week, Jeff McLain caught a 7-pounder on Day 1 to take Big Bass honors. He says his key bait was a 5-inch Yamamoto Senko in green pumpkin.