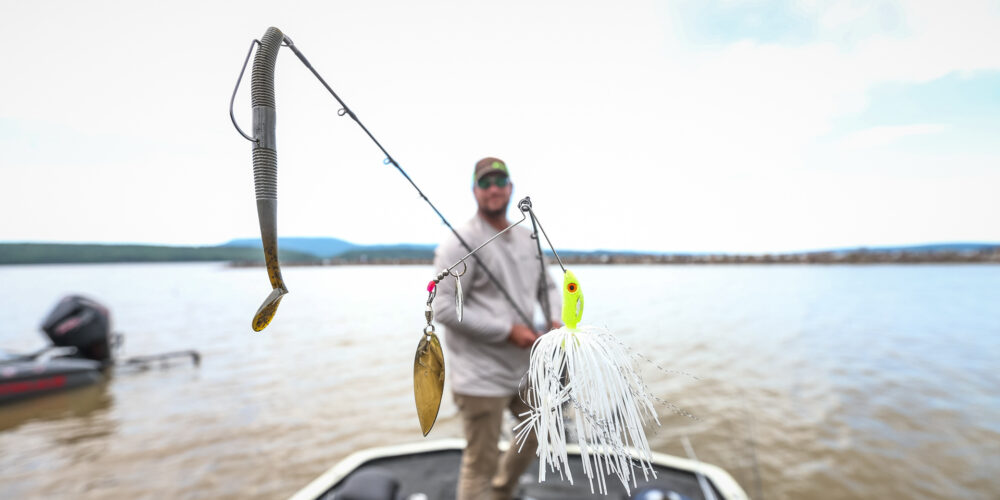 Catching a bass was a tough task last week on Lake Dardanelle. Fortunately, there was no shortage of ways to do it. From cranking rock to dragging worms or flipping grass, the top anglers at the Toyota Series Presented by A.R.E. Plains Division finale found success all over the lake.

1. On a junk-fishing fishery, Kirk Smith managed to find one heck of a pattern. Using his Lowrance ActiveTarget, he scoped out isolated grass patches and stumps far off the bank around Shoal Bay and Thompson Creek. When he found one, he’d toss a Zoom Super Speed Craw (green pumpkin with the claws dyed chartreuse) or a prototype ½-ounce BOOYAH Mobster Swim Jig with a Zoom Super Chunk trailer (both black and blue) to it and could nearly call his shot.

2. Zach King notched his 11th Top-10 finish in Toyota Series and BFL events on Dardanelle this week. A big key was just how slow he was dragging a YUM Swimmin’ Dinger (green pumpkin with the tail died chartreuse) in backwaters. He also ran grass lines along the main river channel, junk fishing between a BOOYAH Pad Crasher frog and old XCalibur spinnerbait they don’t make anymore.

3. Early kickers were key every morning for Theron Caldwell, as he caught two 4-plus pounders every morning cranking rock with a discontinued Lucky Craft RC 1.5. He also mixed in a Z-Man ChatterBait Jack Hammer (black and blue) with a Jackall trailer you can’t find in the U.S.

4. Junking it up around bridges in Illinois Bayou, Bruce Parsons caught some flipping and got a key 5-pounder on Day 2 throwing a black-and-blue swim jig. Yet, the majority of his keepers came cranking either a 6th Sense Crush (chartreuse black) or Lucky Craft 1.5.

5. Wayne Dixon only had 17 bites all week. Fortunately, they were the right ones. He “scrounged” around each day flipping a JP Custom Craw, a BOOYAH Pad Crasher and a Strike King Rage Bug.

6. Determined not to be burned again by the flipping bite, Jeff Kriet finally hunkered down in Illinois Bayou to crank rock with a Z-Man ChatterBait Jack Hammer (white and chartreuse) with a Big Bite Baits Kamikaze Swimon (white) trailer. After catching the biggest bag of the event on Day 2 (20-10), he mixed in flipping a Big Bite Baits Tour Tube as the bite got tough again.

7. Fishing for bed fish in muddy water is no picnic, but it can be done as Fred Roumbanis showed. The goal was covering a lot of water, mainly in the Mud Creek area, with multiple baits – a Stanford Baits Boom Boom Frog (dawg frog and Fred’s frog) and a 4.5-inch Optimum Boom Boom Weedless Swimbait (black n blue and sexy minnow).

8. Capping his AOY season, Andy “The Beautiful” Newcomb milked four small grass patches near Piney Bay with a BOOYAH Covert Spinnerbait with a small, gold Colorado blade and bigger, silver willow blade – the same one he won the Grand Lake event with – and an Apex Swim Jig paired with a Strike King Menace Grub trailer (both white).

9. Jumping sandbars and ping-ponging off stumps, Chip Hawkins found plenty of sneaky places to toss an unnamed swim jig with a Zoom Z Craw trailer and a black SPRO Bronzeye Frog. Unfortunately, the water fell too much the final day for him to get back in them.

10. Instead of finessing the fish into biting, BJ Miller flipped “the biggest, heaviest, most obnoxious stuff that’s harder to ignore,” which was a Zoom Brush Hawg (green pumpkin with tails dyed chartreuse). He also caught a few fish on a Strike King 2.5 (chartreuse black back).