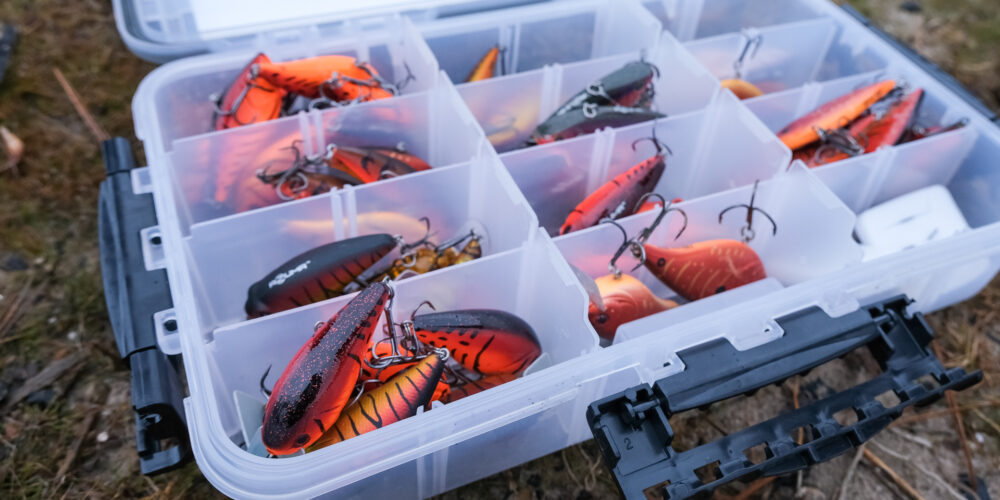 In past years, Sam Rayburn events have taken a small variety of staples to take a Top-10 finish. Crankbaits of all varieties and bladed jigs typically make up a power-fishing strategy. Meanwhile, a Carolina rig often plays a factor for those who chose a more finesse approach.

Lately, Sam Rayburn has been changing due to a lack of grass and an increasing number of nomadic fish, which requires changes in tactics. The 220 pros at the opening event of the Toyota Series Presented by A.R.E. Southwestern Division Presented by Outlaw Ordnance did just that. Anglers junk-fishing their way through the event was a common tactic, and the baits reflect that.

The Top 10 anglers employed a variety of tactics to make the final day cut. Some top finishers found themselves opting for classic Big Sam techniques, while others employed newer tactics to trick the changing Rayburn bass population.

When his bite got tough, Webb continued to work the same areas with a Carolina rig. Webb used 20-pound fluorocarbon for his line and leader and his C-rig baits of choice were an 8-inch green pumpkin lizard and a Zoom Baby Brush Hog in watermelon candy.

2. Derek Mundy stuck to Texas staples. After his deep fish failed to show up, he got to work with an Azuma Shaker Z. Fishing limited areas with grass, Mundy made long casts and moved slowly over shallow flats. Mundy opted to toss his Shaker Z on a 7-foot 3-inch, extra-heavy Castaway Skeleton Nano rod. He paired the stouter rod with a 6.4:1 gear ratio Lew’s reel and 17-pound Seaguar InvizX fluorocarbon. Mundy added that the slower reel was critical for him as it helped him slow down his retrieve.

4. Recent Florida transplant and current Willis, Texas resident Brett Cannon took home a fourth-place finish this week on Rayburn. Using forward-facing sonar for his fish, Cannon rolled with Lowrance ActiveTarget and a 6th Sense Provoke 106X jerkbait in the wabi-sabi color along with 6th Sense Divine Swimbaits in both umbrella rig and single swimbait arrangements to generate his strikes.

5. Kris Wilson went cranking the entirety of the week at Rayburn going to work with a 6th Sense Crush 300 DD crankbait to catch prespawn fish in multiple parts of the lake. Wilson also employed an unnamed Carolina-rigged lizard to catch fish when his bite got tougher.

6. Cole Moore slid into sixth place thanks in large part to his monstrous 11-15 Rayburn largemouth weighed on Day 2. Moore targeted suspended fish an umbrella rig for most of the event, dressing his rigs with a V&M Thunder Shad Jr. or a Strike King Rage Swimmer.

7. Jeffery Rice landed himself in seventh place with a two-pronged attack on Rayburn. Rice caught all his fish utilizing a green pumpkin structure jig with a Strike King Menace Grub and a Texas-rigged Reaction Innovations Sweet Beaver to probe fish out of isolated pieces of cover.

8. Jake Ormond overcame boat troubles on Day 2 to land in the Top 10 when it was all said and done. Utilizing a variety of tactics, Ormond caught fish on a 3/8-ounce Z-Man Evergreen ChatterBait Jack Hammer, adding a Zoom Super Fluke as a trailer. Ormond also caught fish on Bill Lewis Echo 1.75 and SB-57 crankbaits. All of his baits were thrown on KastKing rods, reels and line.

10. Jack York rounded out the Top 10 at Rayburn with more familiar tactics. York’s one-two punch of a 6th Sense Cloud 9 Series C10 and a 6th Sense Provoke 106X accounted for every fish he weighed in the three-day event. York located areas with large schools of fish and hard bottom in practice to optimize his success.