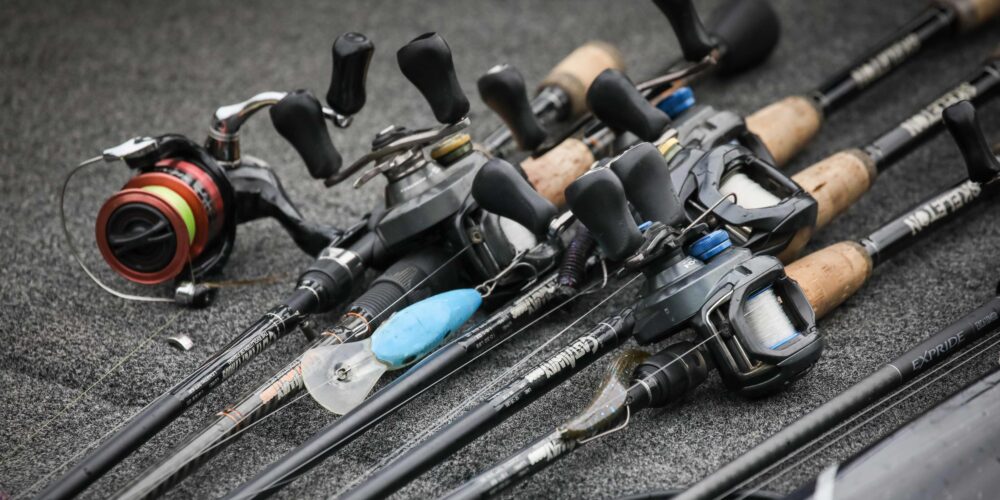 Most of the pros in the Top 10 of the Toyota Series Presented by A.R.E. Southwestern Division Presented by Outlaw Ordnance event fished transition spots. However, there were a few guys who also scored shallow to keep the fish honest during the transition.

Here’s a look at what helped the Top 10 anglers catch ’em from shallow to deep.

1. Hayden Heck was all in offshore, using his Garmin LiveScope to see fish in and around brush piles. Often he’d crank his Strike King 5XD over their heads to see how they’d react. From there he’d mix in a Roboworm Straight Tail Worm (mean green) on a drop-shot, Megabass Vision 110+1 or a discontinued 6-inch swimbait.

2. Keith Combs nearly made it back-to-back late-spring wins on Sam Rayburn by targeting tiny transition spots that weren’t quite offshore but definitely not on the bank. When he found a small group, he got them to fire up cranking Strike King 5XDs and 6XDs or dragging a Strike King Structure Jig with Strike King Rage Craw trailer. He also mixed in a jerkbait.

3. It never really looked like a pattern for Brian Schott because it never really was, who just ran community holes on the north end with a Zoom Ol’ Monster, Norman DD22 and a Carolina rig with a Zoom Brush Hog.

4. With a ticket to the Tackle Warehouse Pro Circuit on the line, Wyatt Frankens sampled a little bit of everything. He junked up shallow with a frog, and cranked a 6th Sense Swank and Z-Man/Evergreen ChatterBait Jack Hammer around grass. However, most his fish all came out deep fishing brush piles. He’d drag a 6th Sense Divine Shakey Head with a 6th Sense Divine Shakey Worm (cosmic black) in them and a Carolina rig with a 6th Sense Flush around them. But all his bigger bites came cranking an Azuma Z Boss 20 (moon beam) alongside the piles.

5. Kevin Lasyone was not about to overthink this tournament, only throwing a V&M Wild Thang Worm (blue flex) to hard spots and brush piles.

6. While he prefers dragging a Zoom Ol’ Monster, Cole Stewart did most his damage this week on shallow creek swings slow rolling a Z-Man/Evergreen ChatterBait Jack Hammer, which he cut the skirt off and put on a Zoom Super Fluke (pearl) trailer.

7. Never finding anything he liked offshore, Chris Jones instead ran hay grass where shad were spawning with a 5/16-ounce Booyah Mobster swim jig with a YUM Spine Craw trailer and Booyah Pad Crasher frog to catch dozens of fish a day.

8. Jack York loved taking a big spoon and “dropping it right on their heads.” So that’s what he did all week to any fish he saw on his forward-facing sonar, using a Lake Fork Flutter Spoon and a few Nichols Magnum Flutter Spoons.

9. Hanging in the Canyons every morning, River Lee found a “crazy” shad-spawn pattern where the fish would come up busting and be willing to eat his Heddon Super Spook (Lake Fork shad). After that he’d run up north to flip cypress trees with a Texas-rigged Yamamoto Senko.

10. Two lost giants the final day stopped Marshall Hughes from holding his place in the top five, but he was still pleased to stay in the Top 10 thanks to his work with a Strike King 6XD (powder blue back chartreuse).