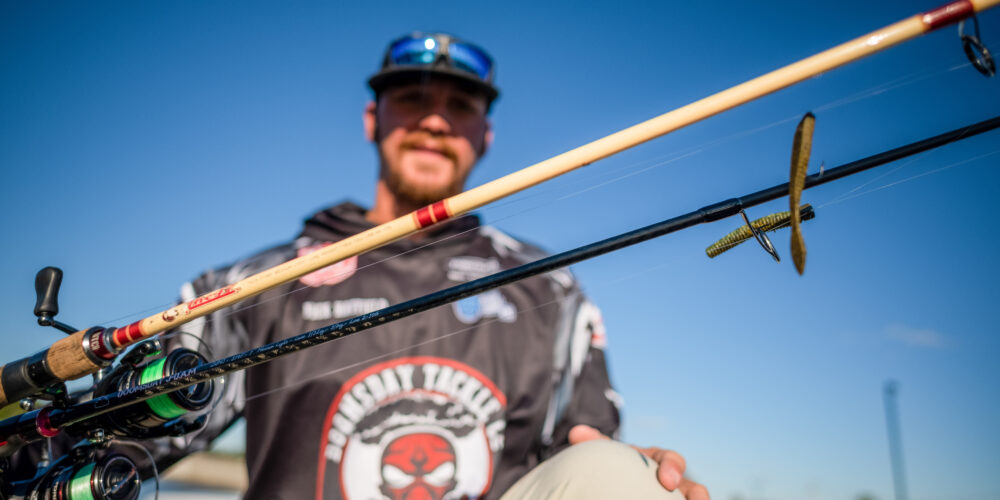 MASSENA, N.Y. – Smallmouth derbies usually feature the same lures over and over. This one was no exception.

Most of the pros in the Top 10 of the Toyota Series Presented by A.R.E. Northern Division finale on the St. Lawrence River relied on drop-shots. However, Carolina rigs, Ned rigs and even the historic tube all came into play this week, too.

Here’s a look at the lures that helped the top anglers.

1. Spike Stoker battled a malfunctioning trolling motor and his own doubts to win the event, relying on a drop-shot with a Berkley PowerBait MaxScent Flat Worm for some key fish, with a Carolina-rigged Zoom UltraVibe Speed Craw doing the heavy lifting.

2. Trying to not be another “Flat Worm guy,” Todd Walters went with either a Strike King Baby Z-Too or Z-Man Finesse ShadZ on a drop-shot with a 3/8- or 1/2-ounce weight depending on the wind, which he said made a difference.

3. Being from Texas, Tommy Dickerson loves a Carolina rig, which meant he had a lot of fun that week. He used a 1 ½-ounce weight and 12-pound-test for both his main line and leader. And on the business end, he had a  Zoom UltraVibe Speed Craw doing the bulk of the work. Dickerson said the trick was a small hook – he used a 1/0 hook, which was lighter and would float above the rocks instead of getting hung up in them.

4. Cory Johnston did everything and threw everything he could to try and take home the win, running more than 90 miles a day; fishing both deep and shallow, and throwing everything from a drop-shot to a tube to a jerkbait to a Carolina rig. The drop-shot with a SPRO CJ Smasher of his design got the main call.

5. He didn’t want to throw it, but Cody Petit found the fish simply couldn’t resist his ½-ounce Berkley PowerBait MaxScent Tube dragged along the bottom. The problem is he went through more than 100 because of snags. In addition to the tube, he also mixed in a drop-shot.

6. The leader going into the final day, Florida and New York guide Brent Anderson kept scrapping with a Z-Man Finesse TRD on a prototype jig he designed for True Bass called the GOBY 1. Unfortunately, the fish simply didn’t cooperate the final day.

7. Fishing main-river current breaks on the Canadian side near Clayton, New York, Elijah Meyers alternated between a 3/8-ounce Ned rig with a Z-Man Finesse TRD and a locally made Bite Me Tackle Tube on a ½-ounce head.

8. The 2019 Toyota Series winner on this river, Wayne Vaughan focused this week on fishing “clean,” sandy spots within rocks. To do so, he threw a drop-shot, jig, Carolina rig and jerkbait at them, with a Berkley PowerBait MaxScent Flat Worm being his biggest player.

9. After opting to not practice much, Nick Hatfield ran around and fished new water each day with a Ned rig and drop-shot. For the Ned, he used an Angler Tungsten head and Berkley PowerBait MaxScent Lil’ General, and on the drop-shot, it was a Berkley PowerBait MaxScent Flat Worm on a 2/0 Hayabusa FPP Straight hook above a 3/8-ounce Angler Tungsten drop-shot weight. Both were thrown on Doomsday Tackle rods.

10. While he wanted to fish deep, Tristan McCormick ended up dragging a Carolina-rigged Strike King Rage Bug on shallow bars to catch much of his weight, with a drop-shot tipped with a Strike King Baby Z-Too as the perfect follow-up bait.