Top 10 Patterns and Baits from Lake of the Ozarks 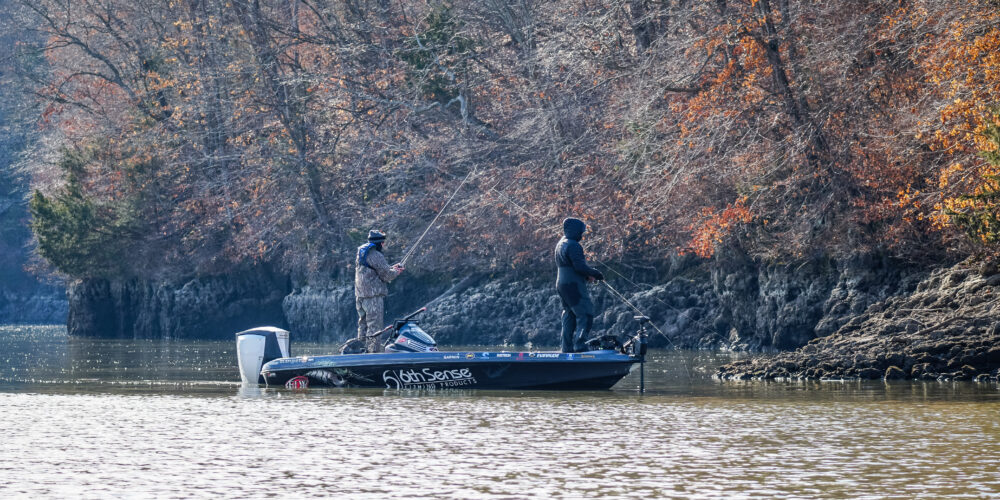 The Toyota Series presented by A.R.E. Plains Division season started on Lake of the Ozarks for what should have been a banger of an event with big springtime catches. Instead, the tournament, which was presented by Fenwick, proved to be a challenge for much of the field due to the frigid temperatures.

The majority of the field, including winner Michael Harlin, employed very similar tactics while using forward-facing sonar and throwing an Alabama rig or jerkbait, some both, on the lower section of the lake.

There were two outliers in the Top 10 who focused on the warmer, spring-fed waters of the Big and Little Niangua rivers. Instead of the water in the 30s on the main lake, it was hovering around 50-degrees in those feeder rivers in the afternoon.

In second place was Andy Newcomb of nearby Camdenton, Missouri. He weighed consistent bags in the mid-teens each day of the tournament fishing an Alabama rig.

His strategy for the week was to find something a little different.

“I looked for the coldest water I could find that was a little off-color,” Newcomb says. “I knew nobody would mess with that water. I just had to figure out how to make the fish bite. This lake is so good that every cove you go to has fish in it and can produce a winning bag.”

He targeted brush in the Shawnee Bend area and caught fish anywhere between 8 to 28 feet of water on the Alabama rig.

“Honestly, I thought I was really going to catch them on a jerkbait after practice,” Newcomb shares. “I weighed exactly zero bass on it this week.”

Instead, he went with the Alabama rig and used two different versions based on what he saw on his electronics.

3. Deep and Shallow Work for Uxa

Jack Uxa had two contrasting patterns: shallow cranking and deep fishing with an Alabama rig. His bags got progressively better as the week wore on and he climbed to a third-place finish.

“The first pattern was up here around Glaize with some shallow fish in warmer water,” he says.

For the shallow fish, he used a crawfish-colored Berkley Frittside 5 crankbait.

“That bait was awesome this week,” Uxa says. “Especially on the last day. I caught a big one doing it and stuck with it all day.”

For his deeper fish, he caught them as deep as 30 feet on a YUM YUMbrella Flash Mob Jr. with shad-patterned 3.5-inch Tackle HD Swimmer swimbaits with 1/8-ounce Berkley Fusion19 Swimbait Jig Heads. He fished it on 20-pound-test Berkley Trilene 100% Fluorocarbon.

Brock Reinkemeyer began each day looking for a limit and then went into search-mode for bigger fish.

“I’d start with the Alabama rig to try to get a limit,” he says. “Once I got one, I went shallow with a Megabass Vision 110 in sexy shad.”

He focused on the area from the toll bridge to the dam and the critical depth was between 8 and 20 feet of water.

“I hit any structure and cover I could find in that range,” he says.

Bucking the Alabama rig trend, Eric Olliverson went shallow and although he started slowly with just three bass for 11-10 on the first day, he made a rally. His second-day catch was a limit for 18-9, and he ended it with four bass for 15-4. Included in the final day catch was a 7-9 lunker.

“I was fishing the Niangua rivers, both the Little and the Big,” Olliverson says. “Fishing super shallow was the key. I was chasing that warmer water that was 45 to 50 degrees.”

He caught two of his fish on day one with a ¾-ounce War Eagle Spinnerbait before switching to cranking.

“I got on a little deal cranking a 6th Sense Crush Flat 75X in fire craw and a 6th Sense Curve Finesse Squarebill in Ozark craw,” he says. “They wanted a smaller bait. The Crush Flat is so small I was fishing it on a spinning rod.”

He calls his areas “typical prespawn” locations and focused on water less than 3 feet deep.

“They were basically prespawn banks,” he says. “It got better each afternoon and there was always a little flurry right at the end of the day.”

Kirk Smith started the tournament around plenty of fish but saw his numbers dwindle each day.

“The first day we caught over 30 bass between my co-angler and me,” he says. “It started to get less and less each day. The fish are moving up.”

He focused on the area between mile markers 13 and 14 and targeted several cover and structure types. As was the case with so many others, he stuck with a jerkbait and an umbrella rig.

“I caught some fishing brushpiles and some on points and ditches,” he says. “It didn’t really matter too much. Most of it was between 10 and 20 feet of water.”

His Alabama rig of choice was the YUM YUMbrella Flash Mob Jr. paired with 3.8-inch Keitech Swing Impact FAT swimmers in pearl white on 1/8-ounce heads. For the jerkbait, it was a Megabass Vision 110 in pro blue.

7. Combo Platter Works for Jelinek Too

Brad Jelinek targeted the mouth of the Gravois with a one-two punch of a jerkbait shallow and the rig in deeper water.

“It went just like practice where I could catch somewhere around 13 to 16 pounds a day,” says Jelinek. “Getting bit wasn’t hard, but getting bigger ones was a lot more difficult.”

He started the day fishing a YUM YUMbrella Flash Mob Jr. paired with 3.8-inch Keitech Swing Impact FAT swimmers in bluegill flash on 1/8-ounce jigheads in deeper water and then went to work with a Megabass Vision 110 in western clown in shallower water.

8. Alabama Rig Does the Trick for Whitesell

Oklahoma’s Stephen Whitesell fished an Alabama rig exclusively this week on the south end of the lake.

“I caught everything on the Alabama rig,” says Whitesell. “Some were in brush and some were in rock on the sides of points. Each day seemed to get a lot slower as the tournament went on. These fish are looking to pull up now and are starting to get on the secondary points.”

Shonn Goodwin roomed with sixth-place finisher Smith during the event and quickly gave him credit for his success.

“Kirk put me on the bite,” says Goodwin. “He figured it out real quick and keyed me into it all. I wasn’t fishing shallow enough when I started practice.”

Goodwin focused mid-lake near the mouth of the Gravois and targeted depths between 10 and 15 feet.

“It was brush, rock, and whatever I could find,” adds Goodwin. “Kirk and I were running different areas and only ran into each other once.”

To catch his fish, he alternated between an Alabama rig and jerkbait. His primary jerkbait was a Megabass Vision 110+1 in pro blue.

“I caught a couple on a jerkbait, but everything else came on the A-rig,” he says. “I tried all kinds of colors and sizes to try to figure them out. The natural colors worked a lot better than the brighter colors for me.”

“I feel pretty happy to have survived an Alabama rig event doing what I was doing,” says Lane. “It was brutal conditions for fishing shallow. I ran up the river in cold, muddy water, which is a terrible combination.”

His Top-10 finish was helped tremendously by his first-day limit of 19-3, which had him in second place. He caught three for 10-6 on the second day and failed to catch a keeper to close out the tournament on the final day.

“I wanted to come here and throw an Alabama rig when I got here,” he says. “The conditions were perfect for it, but in practice, so much was iced over, and I wasn’t able to move around and look for fish like I wanted to. Thankfully, I had a big bag to start off to carry me into the Top 10.”

Lane says he pitched shallow wood with a watermelon red Big Bite Baits Fighting Frog with a ¼-ounce tungsten weight on a 4/0 Gamakatsu Aaron Martens G-Finesse Heavy Cover Hook. On the crankbait side of things, Lane used a SPRO Fat Papa 55 in a crawfish color.

“The pitching fish were way up shallow, and I was kicking up dirt with my trolling motor,” adds Lane. “The crankbait fish were in 6 feet or less. I was fishing channel swings and would bounce the crankbait into the bottom and stop it. That’s when they would get it.”