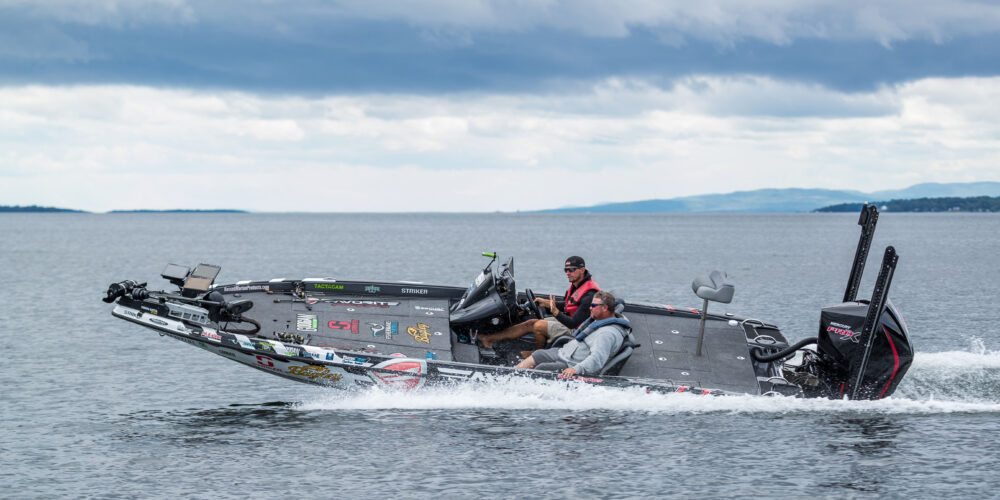 Relying exclusively on smallmouths, Stephen Estes took the top spot in the Toyota Series Presented by A.R.E. Northern Division event on Lake Champlain going away. Weighing the biggest bag of the tournament on the final day, he finished more than 2 pounds ahead of Matt Becker for his first MLF win.

Behind Estes, pros cobbled together some interesting patterns to put largemouth and smallmouth in the boat. But while second and third place both mixed in some green fish, the smallmouth bite was more important than usual in the early summer on Champlain. Tons of bass and bait in the north end of the Inland Sea factored into the event, and a largemouth bite that was just a touch off from the standard made the smallmouth bite very important.

Here’s how the Top 10 caught their bass.

2. Becker Runs for It

Probably burning more gas than anyone on the week, Matt Becker burnished his northern resume with a runner-up finish and weights comprised almost entirely of smallmouth.

“The key for me was anything that was floating,” Becker says. “It could be a milk jug all the way up to a big sailboat or a buoy. Anything that was floating, the smallmouth were suspended under it. I caught most of them on a wacky rig or a spy bait, just depending on the depth of the floating object. The spy bait was more for the buoys out deeper; some of them would be in 50 or 60 feet of water, but the bass would be suspended on the buoy or the chain.”

Becker’s wacky of choice was a  4-inch Googan Baits Lunker Log (watermelon red), and he also mixed in a homemade marabou jig and the aforementioned spy bait. On Day 2, he caught two big largemouth off docks on the wacky rig as well. On the final day, Becker added a massive 5-10 smallmouth on a spy bait. Each day, he stayed in the main lake, never dipping into the Inland Sea, and running water from Burlington to Rouses Point.

“It’s a Great Lakes pattern. I’ve done it on Erie and the Detroit River,” Becker adds. “But never running as many as this. I’ve caught some on moored boats before, but usually it’s largemouth, not smallmouth. It just kind of all came together. It’s pretty simple, but you have to commit and keep running it. I had key ones I re-hit throughout the day, but every piece of floating material had a bass under it.”

Bryan Labelle put together one of the most varied patterns of the week, using all his Champlain wiles to do so.

Running south near Ticonderoga (Ti) on Day 1, Labelle weighed all largemouth. On Day 2, Labelle stayed in the Inland Sea and rustled up a mixed bag to stay in the hunt. On the final day, with calm water, he took off running again, fishing his way almost to the Champlain Bridge to put together another mixed bag.

“I covered quite a bit of water, especially on Day 1 and Day 3,” Labelle explains. “I was going to go down to Ti today, but they had a New Hampshire Open there today, and I started seeing quite a few boats coming up, so I thought I was probably better off to stay up. I only had three good deals down there and they’re really scattered.”

Hitting a mix of hard cover, docks and grass, Labelle says he never found a place to settle down in. His main baits on the week were a wacky-rigged 5-inch Yamamoto Senko, a Dirty Jigs Scott Canterbury Flippin’ Jig with a Zoom Super Chunk trailer and a topwater.

“I feel good. I lost two big fish and that’s a killer, but everybody loses fish,” Labelle says. “I took three days to look around at a lot of stuff. I didn’t like the grass up north, so I knew I was going to have to jump around to catch a bag of fish. I was just spot-jumping and covering water. I had a few fish down by Ti and I thought I could get them – and I did.”

4. Ebare Keys on the Bait

One of the definite storylines of the event was just how many smallmouth, perch and alewives were packed into the area between North Hero and the bridge at Missisquoi. Relating loosely to grass patches, scores of quality smallmouth spent the week gorging on whatever they wanted to eat at the time, and you could nearly always see a boat or two within eyesight that was hooked up.

Tallying two bags over 19 pounds on the week, Dakota Ebare did the best of anyone in the area to earn his first Top 10 of the year.

For his jerkbait, Ebare rolled with a Jackall Rerange 110, his drop-shot bait of choice was a a 3.75-inch Z-Man StreakZ on an Owner Mosquito Hook. For his swimbait, he went with the standard 3.8-inch Keitech Swing Impact FAT.

“It was different every day and the conditions dictated it,” Ebare says. “They were roaming, but they would kind of relate to a grass patch or two. They would roam around a certain little area. What hurt me [Day 2] was I could never get in a good rotation, and I ended up fishing a lot. What I found out today was, every time I would make a move, we would catch some good ones and then they would get wary of the boat and quit chasing bait. I could look around, see a patch of birds, run over there and catch the crap out of them for about 10 minutes. Then, you’d look over where you just left from, and the birds would be back again. Once I figured out that I could run that rotation like that, I could pick a spot where I saw the birds, run over there not even paying attention to my graph, and catch them.”

Kyle Hall didn’t really intend to join the party south of Missisquoi, but he ended up doing pretty well there.

From there, Hall set up shop chasing bass and bait.

“I just roamed around,” he adds. “I was following the bait. I had like a mile-and-a-half stretch that I expanded and roamed around. I had several waypoints of patches of grass if they weren’t blowing up, but when there was any activity, I’d run over and catch them.”

“I was fishing it for fish actually on the bottom,” Hall says. “I they were in 13 to 15 feet, they’d see it hit, come all the way up, and I’d twitch it one time and it was game over. I couldn’t really get them to bite it if they were suspended high; it would spook them. But if there were birds diving or they were on the bottom they would eat it.”

“I saw a lot of big smallmouth and had several of them hooked, but it didn’t work out,” he says. “It was a very bad day.”

7. Villa Joins the Party up North

Making his first trip up to Champlain, Martin Villa earned his 10th Top 10 with MLF targeting smallmouth in the same region as Ebare and Hall.

“That place is definitely awesome,” says Villa of Lake Champlain. “When the wind blows, it sucks, but folks are spoiled up there.”

Starting his practice outside of his key area, Villa struggled in the beginning before heading up to try the flats above North Hero.

“It took me about 45 minutes to locate them, but then I caught 10 in 10 casts,” Villa adds. “As I was taking the last one off, Keith Combs came off plane next to me, so we left.

“That’s what keyed me in on where I needed to be. The next day out, we fished around, and we caught a few, but as soon as we went back up there, I caught 20 pounds in like 30 minutes. I realized they were everywhere up there – there were people fishing specific structures, but all I did was drift and pick off fish on the graph.”

Throwing a drop-shot with a Strike King Ocho that he cut to give a better action and create a striped, perch-like appearance, Villa walloped the smallmouth.

“A lot of times I would throw a moving bait and see the fish rise off the bottom and show themselves,” he says. “They would be buried in the sparser grass out there. I would pay attention to where the dropped back down and throw the drop-shot there and get ‘em. I probably caught 98 percent of my fish on the drop-shot.”

“What happens when it’s calm for me is the grass is always greener in my head,” says Judd of Day 3. “I just ran, ran, ran, ran. I probably should have stayed on that school. We went half an hour without a bite, but if I’d stayed longer, I probably could have caught more. I had to run my deep largemouth and try to swing a little bit.

“I lost some fish on Day 1, but beyond that, I think I fished pretty clean and pretty smart,” says Judd. “I ran a lot of new water, which is what you’ve got to do when everything is pressured like this.”

Fishing mostly offshore, on obvious humps or individual grass or rock places, Judd targeted a mix of species. For the smallmouth, a drop-shot with a Berkley PowerBait MaxScent Flatnose Minnow got the call most of the time. For the largemouth, he rolled with a 3/4-ounce Eco Pro Tungsten Trokar Flipping Jig with a matching black and blue Bizz Baits Killer Craw for a trailer. He also caught a few fish on a walking topwater.

9. Thompson Goes with Bridges and Docks

Joseph Thompson fished a double game plan of largemouth and smallmouth, making a Top 10 despite running into mechanical issues in practice that forced him to spend most of it driving and limited him to just one very windy practice day.

Thompson started his days at the bridge on the north end of Isle La Motte. Catching smallmouth on a variety of baits, he then tried to add in dock-dwelling largemouth.

“There’s so many docks on this place, but out of every 100, one of them is good,” Thompson posits. “I was really just running docks all the way to Missisquoi, running docks that had at least one pontoon boat on it to draw more shade than a regular dock. They were pretty shallow, but nothing special. I just had to run a lot of docks, and each day I weighed in two largemouth off docks.”

On the smallmouth side, Thompson fished a topwater, a drop-shot with Berkley PowerBait MaxScent Flat Worm, a 3/8-ounce football head with a Yamamoto Double Tail Hula Grub and a few other baits. His dock bait of choice was a with a 5-inch Yamamoto Senko that he Texas-rigged.

10. Another Champlain Top 10 for Bacon

Weighing three smallmouth and two largemouth each day, Jason Bacon mixed it up on the north end, running a classic Champlain game plan.

“The first couple days I was starting deep, trying to catch whatever I could out deep, just trying to find the most active fish,” Bacon explains. “I would pull up, catch one or two, and basically pull the trolling motor if they were shutting down. Then, after that, I had a milk run for largemouth – a few docks I try to fish, some rock cribs and stuff like that.”