Top 10 Patterns from the California Delta 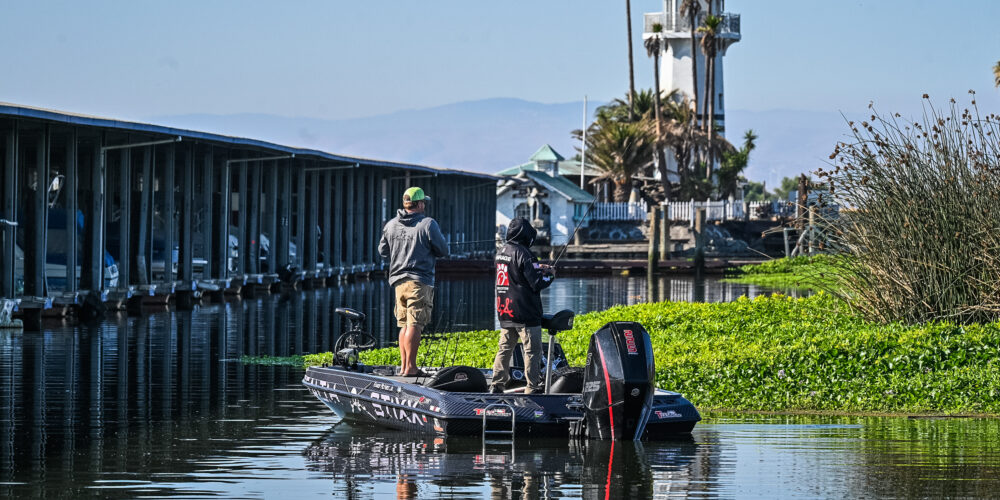 The Toyota Series Presented by A.R.E. Western Division event on the California Delta shaped up to be an exciting tournament from start to finish. With miles of fishable water and a small field, pros had plenty of opportunities to find bass. Finding that big bite, however, was easier said than done. Anglers had to piece together changing weather conditions and the ever-present tides, all within a shortened tournament day.

Champion Andrew Loberg was able to put together a winning strategy, bagging 55 pounds, 11 ounces over three days. He used a ChatterBait to trigger a reaction bite early in the day, before changing with the outgoing tide and punching key pieces of vegetation with a beaver-style bait.

Here’s how the rest of the competitors stacked up behind him.

2. Consistency Sets Moreno up for Success

Mr. Consistency throughout the tournament, Michael Moreno was able to bag 17-pound bags on the first two days, leaving him in the top spot coming into Day 3 of the tournament. He faltered a bit on Day 3, bagging just 14-2, and sliding into second place.

“It was a tough tournament,” Moreno says. “These fish are really finicky.”

Moreno focused on reaction baits in the morning, before moving to a slower approach later in the day. Finding the fish were dragging their feet, Moreno made a key change to his vibrating jig setup.

“Fish just didn’t commit, so I made an adjustment in my rod,” he says. “I went from an iRod Genesis III 723, which is a ChatterBait rod, and I went to a 763 Fred’s Crank Launch Jr. with a lot more flex. After making the change I didn’t lose any more fish.”

As the reaction bite faded with the tide, Moreno moved to a more methodical approach, flipping creature baits and a drop-shot around cover.

A patient approach and key adjustments landed Moreno a big check and a second-place finish.

Coming in third was Jon Strelic, who stuck to a similar system as the top two anglers. He’d start off each tournament day throwing a  Z-Man Evergreen ChatterBait Jack Hammer with a Yamamoto Zako trailer around vegetation.

“I was fortunate enough to get a couple good bites every morning, but today I just couldn’t get one,” Stelic says. “The higher the tide the worse it gets with that reaction bait.”

After the ChatterBait bite dried up, Strelic moved to a slower presentation. He opted for a lighter rig than many of the other anglers, who often stuck to a heavy punching pattern.

“As the tide started bottoming out I started pitching around a 6-inch Roboworm Fat Straight Tail Worm with a ¼-ounce weight on 12-pound-test,” says Strelic. “I’d target the same areas where I was catching them on the ChatterBait, I’d just try to slow down and make them commit.”

Strelic was happy with his third-place performance but wishes he had more time to put together the many variables of the California Delta.

“I had a great week,” he says. “I really enjoy the Delta. I enjoy coming out here. I love it, I just don’t understand it as much as I would like to. A week out here isn’t enough.”

Christian Ostrander was the comeback kid of the week, shocking on Day 2 with 25 pounds, 14 ounces – the biggest bag of the tournament. His key fish came on one bank, but were nowhere to be found on Day 3.

“That’s the way the Delta is,” Ostrander says. “If you beat them up one day, you’re not going to catch them again on the second day.”

He focused on the usual suspects, throwing a ChatterBait, punching soft-plastics, and catching a few key fish on topwater. The color of his ChatterBait seemed to be a key factor, depending on water clarity and the amount of vegetation.

“If I was in dirtier water I could go with a darker color, a red,” Ostrander says. “When I got in the clear water they wouldn’t touch the red ChatterBait. I had to go to a candy grass color. It blends in with the grass better, I think it flies by them and they don’t get a good look at it and they eat it.”

Coming in fourth, Ostrander can’t help but think about what could’ve been.

“I had some big fish figured out a week and a half ago,” he says. “I saved them and didn’t practice at all in the last eight days. When I came back during the tournament the fish were gone.”

Local angler Phillip Dutra was able to surge into the top five, relying on a fast-paced pattern of slow-moving baits.

Covering water was key to his final day flurry, allowing him to bring 18 pounds, 10 ounces to the scales.

Burning all of that fuel could pay long-term dividends, as Dutra prepares to go pro.

“My goal is to qualify for the [Tackle Warehouse Pro Circuit] next year, and I’m going to come out of here with a lot of points,” Dutra says. “Hopefully I can hang out in the top five after Havasu and I’ll be on tour next year. I’m pretty excited about the top-five finish this week, but you always want to win every one – especially on your home water.”

Day 1 leader, William Hume, bagged 42 pounds, 14 ounces during a week that seemed to get tougher by the day.

“As each day progressed, the topwater bite just got weaker,” Hume says. “Then they were eating the ChatterBait really well, but it just got slower and slower as the week went on.”

Catching fish on top using a Greenfish Tackle Toad Toter Buzz was Hume’s best approach, with a ChatterBait coming in clutch as the tide faded.

“Each day I picked up a couple fish on the buzzbait and then I’d pick up the ChatterBait when the water dropped out,” Hume says.

Overall, he has no regrets on the slide from first place on Day 1.

Punching and winding a ChatterBait put Gregg Leonard in the Top 10.

“My biggest fish came punching and on a ChatterBait,” Leonard says. “I caught a lot of fish, just not the right size.”

He can’t help but think about the Day 1 fish that came off at the boat.

8. Tide and Timing Play for Eslick

Clayton Eslick ran a rotation with specific timing to finish in the Top 10 with 36 pounds, 5 ounces.

“I would move a lot, I had specific things I was targeting,” Eslick says. “I’d hit one spot, flip, catch a couple of fish and then go. I had it all timed out.”

The changing water levels made it even more important to be in the right place at the right time.

“The tide really affected me,” Eslick says. “We didn’t have a really big swing, and I think the bite window was really small.”

Overall, he’s happy with the way things panned out on what can be a challenging fishery.

“I’m super pumped about the week,” Eslick says. “Anytime you’re with these guys – these Delta hammers – it’s awesome. All you can ask for is to put yourself in a position to make something happen in the Top 10.”

Totaling 35 pounds, 15 ounces this week, Randy McAbee Jr. put his Stealth Stixx rods to work, catching most of his fish on a buzzbait, and a few more punching to round out his limit.

“I was throwing a standard D&M Custom Baits Delta Hammerhead Buzzbait on wind-blown banks,” McAbee says. “The more noise I can make with it the better.”

He found the tide also played a factor in his approach to certain spots.

“High tide really hurts me,” McAbee says. “I want to be able to see those clumps of weeds where they’re making points out 20-30 feet offshore. If I can’t see them I’m blind casting that buzzbait.”

The extra water also affected his punch bite during the mid-morning.

“Fishing later in the day, I’m on a lot of ledge banks, so I want to be able to see that new hydrilla growth,” says McAbee. “Down there in 6-8 ft of water in the current, that’s where I got all my punch fish this week.”

Coming up just one fish short of a limit on Day 3, McAbee is still satisfied with making the Top 10.

“It was a fun week,” McAbee says. “Three days of fishing is always better than three days of work.”

Rounding out the Top 10, Blake Dyer had a big decision to make to start off each day.

“I would start on a really big mat where I knew I could punch a big one,” Dyer says, “But it required a really long idle.”

The idle took away nearly 45 minutes of fishing time, from an already short six-hour tournament day. He was also attempting to time the tide, which wasn’t able to complete a full swing each morning.

“Not having a tide switch affected everybody,” Dyer says. “In a full day you’ll get that window where you can do really well, really fast, and we just didn’t always get that.”

When it was all said and done, Dyer was pleased with the way things shook out.