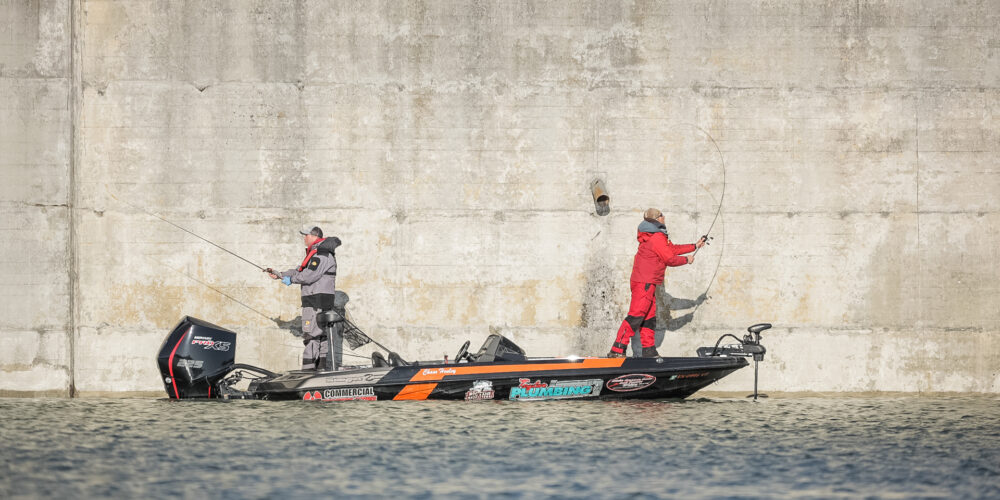 After a Day 1 that saw a handful of big bags in the second tournament of the 2021 Toyota Series presented by A.R.E. Central Division season, Day 2 brought colder weather and plenty of sunshine – a combination that resulted in markedly lower weights across the board.

Adam Wagner (read more about his leading pattern here) weighed in a bag more than 10 pounds lighter than his stringer yesterday and still maintained his lead, which should tell you just about everything you need to know about how stingy the bite was on Thursday.

Still, every pro in the current Top 5 caught at least 13 pounds on Day 2, including 17-plus-pound limits from Brandon Cline and Bryan Thrift. Here’s a look at how Cline, Thrift and the rest of the Top 5 boaters caught their fish on Day 2 of the Central Division presented by Neat Companies event on Dale Hollow.

With the slot limit for smallmouth on Dale Hollow (anglers may only possess one smallmouth between 12 and 16 inches and one over 21 inches), most anglers opted to forgo chasing big smallmouth in favor of largemouth moving up shallow to spawn. Cline has mostly done the same, with one noteworthy exception.

“I found a little spot that I’m catching some smallmouth on that I started on yesterday, and we caught 12 smallmouth off of it first thing,” he says. “Not one of them kept. My co-angler had two 20 1/2-inchers and I caught a 20 3/4. Pulled up there today and only got one bite off it and it was a 21 1/2.”

Having that kicker smallmouth allowed Cline to run a lot of largemouth water in the mid-lake area, focusing specifically on clearer water than can be found in a lot of areas on Dale Hollow right now. He’s not fishing dirt shallow, either, though he says he’s not too far from the bank at any given time.

Cline chose to remain tight-lipped about his bait selection with another day left to fish, though he did say he caught all his fish on Day 1 on the same bait and employed three different baits on Day 2.

Unlike many anglers this week, Derik Hudson hasn’t seen much of a decline in the willingness of his fish to bite, despite the changing weather conditions. For Hudson, it’s been all flipping all the time.

“I started off right off the bat going flipping,” he explains. “With the water high, we found out in practice that flipping was thew way to go, so I went straight to it right off the bat and I didn’t see throughout the day that it changed all that much.”

After breaking off some fish on Wednesday, Hudson says he upsized his line from 15-pound-test fluorocarbon to 20-pound-test and opted for a stouter hook to match. On Day 2, Hudson got five keeper bites and got them all in the boat.

“Today I had five keeper bites, but they were better quality,” he adds. “I didn’t lose any today. I just made some adjustments.”

After upping his limit from 13-8 to 15-11 from Day 1 to Day 2, Hudson sees no reason to make any further adjustments from here on out.

“I’m going to do the same thing,” he says. “I love doing it. Just keep griding and try to go find them.”

It’s no surprise at all to see Thrift’s name in the Top 5 of any field, even after the MLF Bass Pro Tour pro weighed in just four fish on Day 1 – and even after not putting in any real practice for the event.

“I didn’t practice because I was thinking they might cancel the event, so I got here Tuesday and rode around a couple hours,” Thrift says.

Noting how dirty the water was, Thrift opted for his new signature-series ChatterBait from Z-Man to catch those four fish, but he had to make an adjustment on Day 2, weighing in four of his five limit fish on a shaky head.

“I don’t know what I’m doing; I’m just fishing and hoping I get a bite,” he quips. “I’m getting very few bites, and I’m just fortunate that some of them have been good ones.”

Thrift has a few areas he feels good about, but he’s still just doing a lot of practicing as he goes along. So far, that program has included fishing some points and the edge of bushes, but that could change in a hurry on Day 3.

“I caught six keeper largemouth all day today, so I’m definitely not on them by any means,” he admits. “It looks good on paper, but I still don’t know what I’m going to do.”

Had Chase Henley not lost a 3 1/2- or 4-pounder on Thursday and weighed in a full limit, he might have had a chance to knock Wagner from the top spot with one day left to fish. That’s a thought that might haunt some anglers, but Henley doesn’t seem to be too dismayed.

“I lost a 3 1/2- or 4-pounder that really would have helped me and put me up around 16 (pounds) or so, but that’s how it goes,” he says. “Every fish tomorrow is more points and hopefully more money.”

Henley has been on the move this week and notes that he only repeated his program in a couple of the same areas as a day prior. On Thursday, he mostly ran all new water in hopes of coming across a kicker willing to offer at his jerkbait.

A jerkbait has done all the damage for Henley to this point, having weighed in all nine of his fish on one. Despite having some success with a 5-inch trout-imitation swimbait in practice, that bite had died off by Wednesday.

As for Friday, Henley plans to stick to what got him here, but he’s hoping for a little less sunshine and a lot more cloud cover.

“I really think where I’m fishing, more or less, I need cloud cover,” he explains. “The water is so clear and visibility is a big deal to those fish. The fish I’ve been catching were in 8 to 12 feet. I think a lot of them just stayed a little deeper today (because of the sunshine).”

Still, regardless of what happens, Henley is happy with where he’s at and what lies ahead.

“I’m happy with how it went,” he says. “I made the Top 10. I’m going to go fishing tomorrow and see what happens.”