Top 5 Patterns from Day 1 on Guntersville 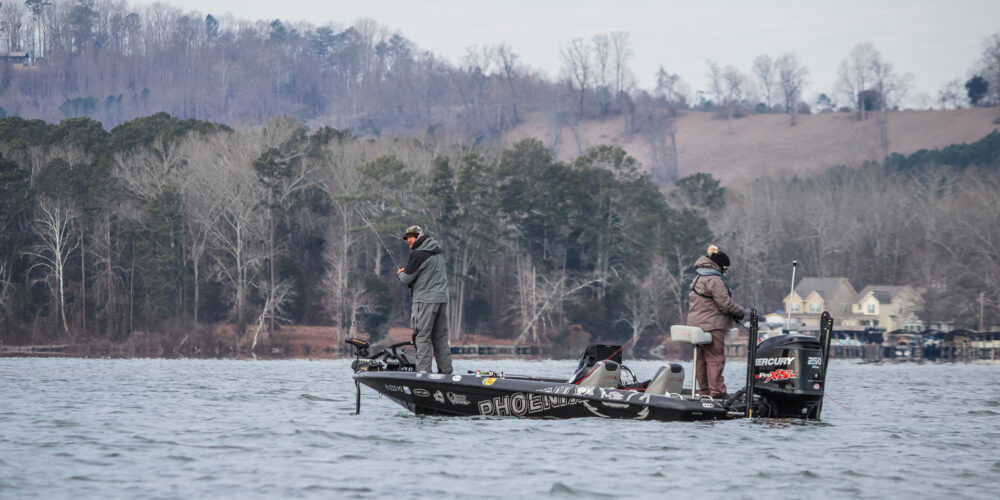 Jimmy Washam topped the leaderboard on Day 1 of the Toyota Series presented by A.R.E. Central Division opener on Lake Guntersville with 23 pounds 7 ounces, but from there, the remaining top 5 looks like quite a horse race. Only 8 ounces separates second place from fifth place.

Here’s a look at how the four anglers chasing Washam caught their fish on Wednesday in frigid northern Alabama.

Casey Martin, a well-known name in various levels of MLF competition and a guide on Guntersville, claimed second place on Day 1. He missed big fish honors by just 2 ounces with a 7-3 kicker in his bag. It was a welcome surprise for Martin, who blanked in the Phoenix Bass Fishing League presented by T-H Marine event on Guntersville last Saturday.

Like Washam, Martin capitalized on the late-afternoon front moving in.

“I caught three in probably the last 20 minutes when the cloud cover moved in,” he adds.

Unlike others who were fishing with slow retrieves, Martin says he was “reeling pretty quick.”

“I think it’s a reaction bite, and I’ve got one little secret lure that I can’t reveal yet.”

If Martin repeats his success on Day 2, we’ll have to press him on that point.

Only an ounce behind Martin, Trent Palmer ended the day with 19-11. He caught about two dozen fish and culled four or five times throughout the day.

Palmer has been on Guntersville practicing since last Friday and says it hasn’t been easy. He finally started keying in on three prime areas, each with a hard bottom and eelgrass, and the results speak for themselves.

But Palmer admits he’s not throwing anything different from most others – vibrating jigs and lipless crankbaits. The key for him was finding the right places to throw them. It’s all about setting up on a sweet spot where he believes fish are moving in and out and then camping out.

During practice, many fish Palmer caught seemed to sport different colors or shades, indicating they were moving in and of the areas he was fishing.

“I’m getting there, putting the trolling motor on spot-lock and letting the fish come to me,” Palmer says. “If you’re on the right spot and dig your heels in, they’ll find their way there.”

Will Robinson spent Day 1 fishing shallow eelgrass like most others in the field, but unlike many of his competitors, he did catch some deep fish along the way.

“I’m hole-jumping deep and shallow,” he says. “I did find some fish deep on an umbrella rig and swimbaits.”

Robinson says he went looking for deep fish in practice because he wanted to have a game plan for the cold weather forecasted to be moving in at the end of the week.

This is Robinson’s first-ever Toyota Series event and to be in the top 5 is a blessing for the Columbia, Tenn., angler.

“The Good Lord blessed me,” he says.

Sometimes, when the weather’s not ideal and the fishing is tough, there’s not much more to say.

Sloan Pennington rounded out the top 5 on Day 1 by bouncing around the main river and back in a couple pockets. The key, though, was always keying on shallow water wherever he went.

“I don’t think a fish even saw my bait below 6 foot (deep),” he says. “This is the first bit of sunshine these fish have seen in a few days and I was as happy as they were to see it.”

Pennington’s baits of choice were what seem to be the Guntersville standard these days: a vibrating jig and a lipless crankbait.

“My trolling motor batteries are dead,” Pennington says. “I put it on 10 and put [my bait] in front of as many fish as I could.”