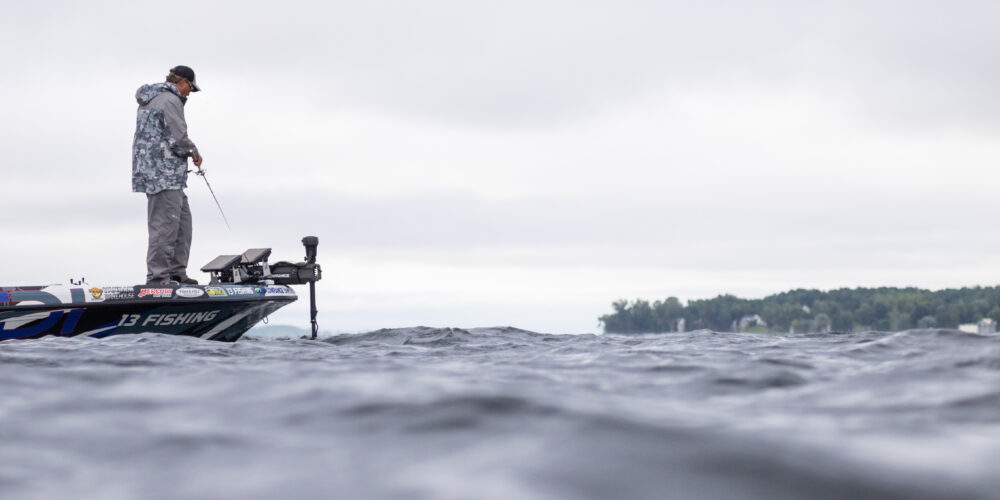 PLATTSBURGH, N.Y. – The recent Tackle Warehouse Pro Circuit Presented by Fuel Me event on Lake Champlain was a barnburner, and it looks like the Toyota Series Presented by A.R.E. event is going to follow the same plan. With weights on Day 1 off the charts for the entire field, Lake Champlain is proving to be as productive as everyone expected in the penultimate event of the Northern Division season.

Putting up 21 pounds, 4 ounces on the day, Wayne Vaughan took a slim lead over Spencer Shuffield to start, but the top eight pros are all less than 1 pound apart. With calmer weather in the forecast, we could see quite a bit of movement on the leaderboard on Day 2.

Narrowly missing the Top 10 last week, Shuffield “didn’t whack ‘em” today, but luckily managed about 50 fish and one spot back of the lead. Shuffield is obviously on big numbers of good fish and one of the preeminent LiveScope anglers in the game. He’s perhaps due to finally bring a big win home.

“I spent those last four or five days (of practice) looking and looking for new stuff and found a lot of good fish,” Shuffield said. “Today, I ended up going back to the area where I fished the Pro Circuit event and fished in there. I actually had probably 20 ½ (pounds), and then pulled up to an area near takeoff and culled with another 4 ½.”

“Seeing” every fish he catches, Shuffield is doing his best work in about 25 to 35 feet.

“It’s just a drop-shot and Ned rig, just scopin’ ‘em,” he said. “It was a little harder today because of that dang wind. You couldn’t really hunt them down; you had to just drift and fish while you were drifting. There were a lot of really good ones I saw today and you just couldn’t make a pitch to them. They’d be right there, 80, 90 feet away, and you couldn’t catch them.”

Shuffield thinks the wind doesn’t allow him to present his bait properly in anything but a short pitch or a cast directly into or with the wind.

“I learned over the last eight or nine days that if you pitch to them and you’ve got a bow in your line, they will not bite it,” he explained. “You’ve got to have a straight line. If there’s a bow in it, it’s like it doesn’t allow you to shake it right, or pulls the bait on its side. They go down to it and they just will never connect with it unless they get it before it gets to the bottom.”

If things calm down, the smallmouth master from Arkansas could be pretty dangerous.

The field for this Toyota Series event is pretty star-studded, and Bryan Schmitt obviously fits right in. Not only is Schmitt one of the best on Champlain, he’s also the all-time winningest at the Toyota Series level, with six as a pro, spread from Florida to Maryland.

“I had a trying practice. I didn’t get a lot of time,” Schmitt said. “I sampled everything I usually do, and it’s 50 percent of what it usually is. I didn’t want to take a gamble on Day 1. I needed to go smallmouth.”

Accordingly, Schmitt fired up his LiveScope and stuck deep, in the 30-to-40-foot range.

“I hunted and hunted offshore and finally found a little area that had some,” he said. “You could catch one good one and they’d break up, and I had to come back. Once I saw that was working, I stayed with it. I had three 4-pounders pretty early and jumped two off. I said ‘man, it’s hard to catch a 4-pound largemouth right now, so let’s stay with this.’ I did it all day, and caught fish throughout the day.”

Losing three big ones undoubtedly hurt Schmitt’s final tally, but he still ended the day within striking distance. With another good day tomorrow, he may think about trying to add a largemouth or two into the bag on Day 3.

“I think I’ve got like three little places,” Schmitt said. “I sampled a lot of stuff today that didn’t work. I need to sample some more and find some places tomorrow to go with it. Then, if I do make the cut, I might run my usual stuff.”

With an ABA win on Champlain under his belt already this year, Massachusetts angler Henry Fristik is on a roll on Champlain.

“My practice wasn’t the best, so I wasn’t really sure what I was going to do today,” he said. “I had a couple spots I thought might hold some fish, but I didn’t really find a lot on them in practice. I went to one, and it was a rock pile that had three really good ones on it.”

Later in the day, Fristik switched patterns to keep catching, and said the weather really helped him. Fishing “in between,” he’s not 100 percent committed to the deep forward-facing sonar game like some of the pros. Still, like Schmitt, he’s not doing huge numbers, and said he only caught 12 or 13 bass on the day – but they were all big.

Known for his largemouth prowess, Fristik might be the right angler to take a gamble, but it sounds like he’s content to stick with the smallmouth.

“I could go to Ti. Tomorrow is the day to do it, but Ti hasn’t been fishing good,” he said. “It’s hard to leave 20-plus pounds of fish. I’m going to stay here and put it together.”

A two-time winner in Toyota Series competition on Champlain, Ron Nelson is not who you want in the rearview on this pond. Still, he made a critical culling error on Day 1 which cost him some ounces, and as everyone knows, “ounces is money in this game.”

“The game plan was to burn gas until I landed on them, and that’s what I ended up doing,” Nelson said. “I ran south, I ran north, I ran to the Inland Sea and then I ran back. I think today sucked for me, really. I had a long day, and it was a real struggle. Hopefully tomorrow I can change up the rotation a little bit and catch them a little easier, because it wasn’t easy for me.”

“I caught my first big one in the Inland Sea in about 45 feet of water,” he said. “I think there were probably 20 fish in the school. I thought I was going to wreck them. By the time I got the fish in the boat, they were gone. I circled there for probably 45 minutes and couldn’t find a group.”

Still, Nelson’s adaptably shone through, and he left the Inland Sea for familiar water on the New York side.

“I came back to a can and missed one that was big,” he said. “Then I drifted off to a little rise and caught a big one and started culling all my fish out. Some of the fish I did catch today were on some structure, but overall, the ones I want are on bait.”