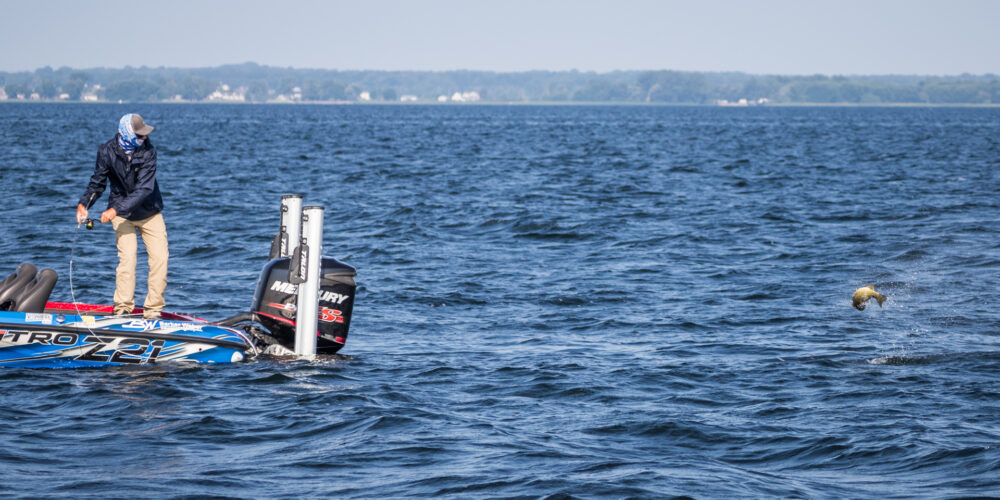 As is often the case, the weights after Day 1 of the  Toyota Series Presented by A.R.E. Northern Division event on Lake Champlain are about as tight as can be. While the top three edged past 20 pounds in a variety of ways, the bulk of the field is sacking up the smallmouths on the north end of the lake.

Day 1 started with the lake uncharacteristically foggy, but it cleared up and turned into a beautiful and fairly blustery day. A strong south wind in the afternoon limited movement to a degree, but it seemed to have the fish biting well. As expected, the top pros are mostly staying north, with only two of the top 17 pros fishing for largemouth at the south end of the lake. That said, just because the pros willing to run south are scarce doesn’t mean they’ll be unsuccessful, as the north end is certainly under plenty of pressure.

Up north, a combination approach targeting smallmouth and largemouth is doing well, with some coming deep and some coming shallow. One pro in the Top 10 actually mixed in a bedding bass today, and though that pattern isn’t likely to hold, it’s good proof that fish can be found in all stages and caught from a few feet to well over 20 feet of water.

Making the run south to Ticonderoga, Bryan Labelle is long overdue for an MLF win on his home lake.

Throwing a frog in shallow grass, Labelle is planning on turning and burning again in the morning, despite not really getting that many bites.

“It was slow going for sure. I only got 10 bites all day, but they’re good quality fish and it’s fishing good,” Labelle says. “It’s just slow; nothing is grouped up and they’re really scattered.”

Labelle has a B.A.S.S. Open win to his credit on Champlain, and that came fishing for largemouth up north. This time around, he’s not loving the northern grass bite.

“The grass [up north] is terrible. That’s the killer,” he says. “Ti is producing for sure. I had a long day. tomorrow is a short day, so it’s a gamble.”

Going with the combo platter, Jason Bacon weighed three smallmouth and two largemouth he plucked from the Inland Sea on Day 1.

“I started out deep, fishing a bunch of deep spots until I found where they were feeding,” Bacon explains. “I had 18 pounds by 9 a.m., and then I picked up the flipping rod and went for largemouth.”

Bacon has a lot of experience on Champlain, and a little less wind would let him really use it in pursuit of some kickers.

“I feel pretty good. I have a ton of fish I didn’t even go to, so I should be all right,” he adds. “Today, I stayed in the Inland Sea for the most part. If the wind lays down tomorrow, who knows where I’ll end up.”

Going with an all-smallmouth approach, Stephen Estes basically camped in one area and walloped them.

“I was just fishing offshore with Lowrance ActiveTarget,” Estes says. “That’s the name of the game right now, just drop-shot and chasing individual fish with ActiveTarget.”

Maybe catching more fish than anyone else, Estes feels good going forward, even with changing conditions.

“I have multiple spots, but today I just stayed in one area,” he says. “We’ll see what tomorrow brings. We’ve going to have different wind direction I think. We’ll see, but we caught a lot of fish today; I’m pretty excited. I have largemouth areas and I didn’t hit them today. I think tomorrow I’ll probably rotate some largemouth stuff to try to get a kicker – I just wanted to stay consistent today.”