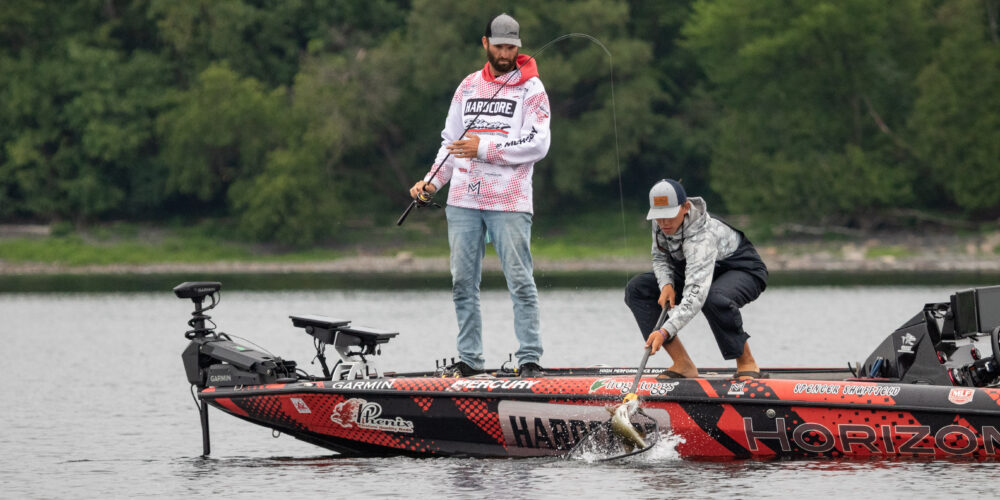 PLATTSBURGH, N.Y. – It’s practically impossible to overstate how good the fishing has been for this week’s Toyota Series Presented by A.R.E. event on Lake Champlain. In 2021, the Bassmaster Elite Series event on Champlain was widely hailed as one of the best events of the year and an all-time Champlain tournament – after Day 2, five pros were at 40 pounds or better. In the recent Tackle Warehouse Pro Circuit Presented by Fuel Me event, six pros passed 40 pounds for two days. Now, going into day three, the entire Top 10 is across the 40-pound mark and on what would be a winning pace in many Champlain tournaments of yore.

In the lead, Wayne Vaughan is catching all smallmouth and is on pace to pass the 60-pound mark with relative ease. Behind him, the Top 10 is mostly dialed on the smallmouth game, with a few notable exceptions. In third, Kurt Mitchell mixed in a few green ones, and Bryan Labelle, the largemouth king, has caught quite a few green fish over the first several days.

Going into the final day, a really big bag could go a long way for anyone in the Top 25. But, considering the consistency of the Top 10 (and especially the top five or six), it’s going to be hard to crack the top of the leaderboard. Though plenty of pros did well on Day 1 and fell out of it, the ones chasing the hardware all have history on their side and strong patterns going.

Averaging 15 or more fish a day on a drop-shot, Joseph Thompson has played the smallmouth game to perfection so far.

“They moved on me today; they were out way deeper before this,” said the Pennsylvania pro. “Today, it took me a little while, but they moved in shallower today than in the past.”

Thompson said he’s fishing a mix of actual spots and roaming fish, with about 60 percent of his targets being an object. For Thompson, despite his history on Champlain and past success fishing for largemouth, he’s all-in on the smallmouth this week.

“I feel pretty good. I don’t know that I beat them up too bad,” he said. “If not, we’ll be running and gunning. The key was just getting to Day 3. The largemouth haven’t been there for me this year. I can go out and catch 16 or 17 pounds, but when everybody is bringing in 20 pounds of smallies … when in Rome, do as the Romans do.”

The most interesting man in bass fishing, Mitchell is threatening to put together one of the most diverse wins in Champlain history. Starting the tournament close in the wind on Day 1, he weighed all smallmouth. On Day 2, he turned southward, toward the Champlain Bridge, for a mixed bag.

“I knew if I went to Malletts Bay, I could probably catch 18 or 19 pounds, and it was blowing so hard, I wasn’t gonna run to Ti,” Mitchell said of his Day 1 plan. “I had no other option than to make those fish work. I ended up having a better day than I thought I could have.”

“Today, it was flat calm and I got to do my thing,” he said. “The fish didn’t eat that well. I saw a lot of fish follow my drop-shot and my jerkbait and they wouldn’t eat. When the sun came out for like 10 minutes, I caught my three smallmouth.

Mitchell has plans to mix in a big largemouth from the south, and he thinks it’ll be essential to another really big bag.

Hunting fish chasing bait with his LiveScope, a key adjustment to his drop-shot put Hall where he needed to be.

“I really don’t know what had them messed up today,” he said. “Something changed, though; something had them eating my bait different. I actually changed my rig for the afternoon.”

As for the prospect of going back-to-back, Hall thinks it’s on the table.

“I’d love to, and I think it is possible,” he said. “I haven’t fished the secondary spot early at all – with my place drying up, I might start there. I’ve already told several people, I think I’ll pass out on stage if I win a second one. The first one was unreal enough.”

One of the best in the game with forward-facing sonar, Spencer Shuffield was all around fish again on Day 2, but couldn’t get them to bite or put them in the boat enough to catch 20 pounds.

“There were big ones everywhere,” he said. “Everywhere I went, big ones. They’d come off or strip your bait or go down and just look at it. It’s weird.”

Starting the day in a numbers area, Shuffield caught a ton of fish deep with a Ned rig and a drop-shot. Tomorrow, the plan is to lean into his secondary pattern and fish fairly shallow in the main lake.

“It was so calm today; you could visibly see them,” he outlined. “I’m fishing pretty shallow, only 8 to 12 foot, and seeing them on LiveScope. The same ones guys catch on topwater, I think – I’m just covering ground with LiveScope.