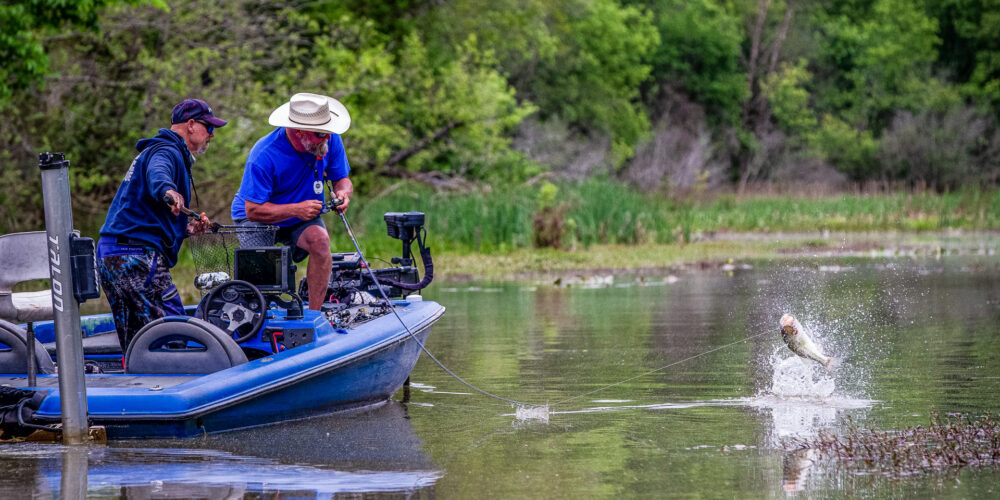 Kirk Smith has a lot of confidence leading going into the final day. He’s going to need it.

Not only is he leading the Toyota Series Presented by A.R.E. Plains Division event on Lake Dardanelle by just 1 ounce. He holds that lead over a truly stacked lineup chasing him. You’re talking more than a dozen Top 10s on the lake, a Bass Pro Tour pro who cracked the biggest bag of the event and the Angler of the Year.

And most all of them are dialed in on different things.

Maybe third time is the charm for Zach King. Or, at least he sure hopes so.

The local has been in second twice on Dardanelle going into the final day, and unfortunately, he “bombed both of them” that third day. Considering this is his 11th Top 10 on the lake, at some point he’s going to make it happen on the final day. This time, he figures he has a spot to do it.

Fishing a truly sneaky backwater area, King has caught an early limit each morning before bouncing to other spots and junk fishing with a jig, worm and spinnerbait. He sees no reason to change his game plan, especially considering he saw one still on a bed in the backwater that he plans on catching tomorrow first thing.

Yet, if he can get one thing, he’ll be really excited.

“If the water would fall (holds up fingers an inch apart), even if it would fall tomorrow, I have one spot … Oh …,” says King. “The water didn’t fall up [where I’m fishing] today and everything got muddy again. So, if it falls even a little again and clears up a bit, that one spot is going to be good.”

To win, an angler needs big, female bites. For Chip Hawkins, that means he needs the sun to come back out.

“I caught a lot of fish today, but I was catching a lot of buck bass,” says the Day 1 leader. “I really needed the sun to stay out to get the female bites. That sun gets them tight to the cover I’m fishing. If they get away from cover and spread out, they’re really hard to target.”

Considering tomorrow’s forecast is a sun/cloud mix, Hawkins is definitely a bit concerned. However, he did lay off his fish today around 11:30 a.m. to “go practice and look at some stuff I hadn’t looked at instead of sitting there burning up limit fish.” During that he found some stuff that gave him hope, but he’ll mostly be hoping his cowboy hat will be casting plenty of shade on his face tomorrow.

Pros didn’t need any added degrees of difficulty this week. Lake Dardanelle has been fishing tough enough. Well, Theron Caldwell got an extra hurdle today and fortunately was able to clear it.

At around 10:45 a.m., the Texas angler threw an ear on his prop that sidelined him for roughly 45 minutes until a local Phoenix dealer, Horizon Trike and Marine, was able to bring him a new one. It’s a good thing, too, because he had three fish in his livewell waiting with him, including a 4- and 5-pounder.

He caught them like he has the majority of his day, cranking rock, and he’s been doing most his damage early.

“The last two days I’ve caught some big ones early,” says Caldwell. “If I don’t get them early, it’s been a struggle to catch any big ones. Day 1 I had a limit for 13 pounds in the first hour with a couple 4-pounders, and today it was a 5 and a 4. So tomorrow I need to catch a couple more big ones early so I can then scrap up a limit throughout the day.”

Jeff Kriet is determined to not be “that guy” again on this lake.

It seems every time he comes to Dardanelle, he gets on a great grass bite. And every time, the water level drops and he bombs.

“If the water falls a quarter of an inch they vacate the grass,” says Kriet. “And then it’s always won around rock. So, I said I’m staying around rock this time.”

Yet, he still couldn’t get away from the flipping bite on Day 1, as he “caught the snot out of them.” Unfortunately, they were all small.  So today, he finally decided to commit to winding around rock. The result was the biggest bag of the event – 20-10 – to vault him into the top five.

As for what kind of rock, it’s some of the most obvious rock there is in Dardanelle.

“There’s nothing secret about where I’m at,” says Kriet of where he’s fishing in Illinois Bayou. “I’ve watched a thousand Top 10s come out of that area. I never fish in there because there’s always too many people, and man, they beat me every time. So this time, since I was coming straight from [the Bass Pro Tour event on Lake] Travis, I said, ‘I’m not going to be that guy this time. This time I’m going in there.’”