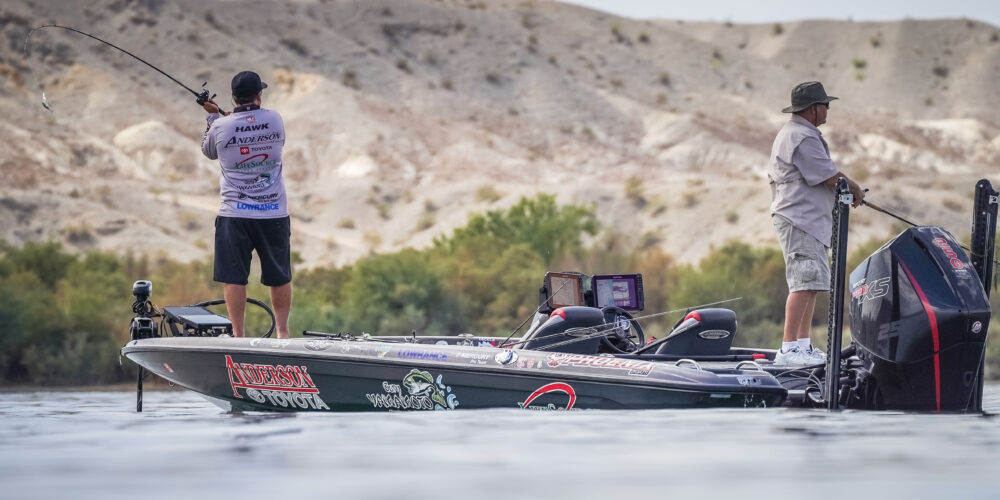 There were a lot of unknowns – but a lot of optimism – about Lake Havasu’s fall bite. Turns out, the optimism held up … at least for the top pros.

Mike Williams showed what the lake can do by topping the 20-pound mark to lead the Toyota Series Presented by A.R.E. Western Division finale. Andrew Loberg is exactly 1 pound behind with 19-9.

However, the weights started dropping off pretty fast after that, with just over 14 pounds needed to make the Top 10. But, amongst that Top 10 are some true west-coast hammers all capable of making life uncomfortable for Williams.

Momentum can be huge in this sport, and Loberg certainly has it.

Fresh off winning the Toyota Series event at the California Delta, the young pro is once again in position to add a second big trophy to his case.

“[Winning two in a row] would be sick,” Loberg admitted.

Unfortunately, he’s not leaving himself much room for error. Fishing in the river, Loberg only had seven bites and landed just five. He feels there are plenty of fish for him to catch up there, but getting them to bite has been tough. Hence him covering as much water as possible power fishing.

A big thing that helped him today was the constantly changing conditions.

“I caught some when it clouded up in the morning and this afternoon when the wind picked up,” Loberg said. “I’m still trying to learn how these fish react to changing conditions. If I have wind or low light it seems they want to eat.”

While Loberg may be still trying to figure out how Havasu’s fish react to conditions, it’s safe to say Roy Hawk has that dialed in.

“I have a little history here,” Hawk said coyly about his home waters.

Yet, even Hawk admits he had to “stumble upon” the pattern he has going, as he caught a fish this morning around 7:30 a.m. that clued him onto something he feels could be special.

“I caught a fish and the lightbulb went off,” Hawk said. “So I started keying in on that same type of stuff. It’s a combination of factors that is pretty key, and I know a lot of areas pretty similar. So I hope I can build on it tomorrow.

“The lake is fishing so tough right now. A lot of guys I know typically catch them didn’t today. So, it’s not so much about knowledge. It’s doing what the fish are doing right now, and it’s not going to be on standard, everyday spots.”

Even with the small field, not having to share water is a nice thing, and Randy McAbee Jr. is definitely not sharing any.

While most the top anglers have been hanging near takeoff in the basin or running up the river, McAbee has been running south about midway to the dam where he’s found few anglers but a ton of exactly what he’s keying.

“I’m fishing points; very specific points,” McAbee said. “I way pointed about 50, and I’m trying to hit them all twice. I hit them all today and half of them on the way back.”

Obviously, the only way to do that is to fish fast, which he’s doing by making only a handful of casts “grinding the lip off a crankbait” before moving on to the next point. Now, even with all that running and untampered water, McAbee says he only caught five keepers and lost another two, but he knows with what he has, he should be able to keep replicating today’s weight the rest of the event.

The Toyota Series has visited the California Delta twice this season. The angler in second place (Loberg) won the August event. Logan Huntze won the one before that in May.

Like we said earlier, this Top 10 was stacked, as three of the remaining pros hail from Lake Havasu City and Tai Au won here in 2020.

But back to Huntze, this was his first time fishing Havasu. So he did some prefishing and he said every day was different for him. So, he just ran with that today.

“I went out, hit a bunch of different spots, and I caught them on just about everything today,” Huntze said. “It wasn’t one specific thing. It was one fish here, one fish there, all on different baits anywhere from the basin to up the river. Just true junk fishing.”