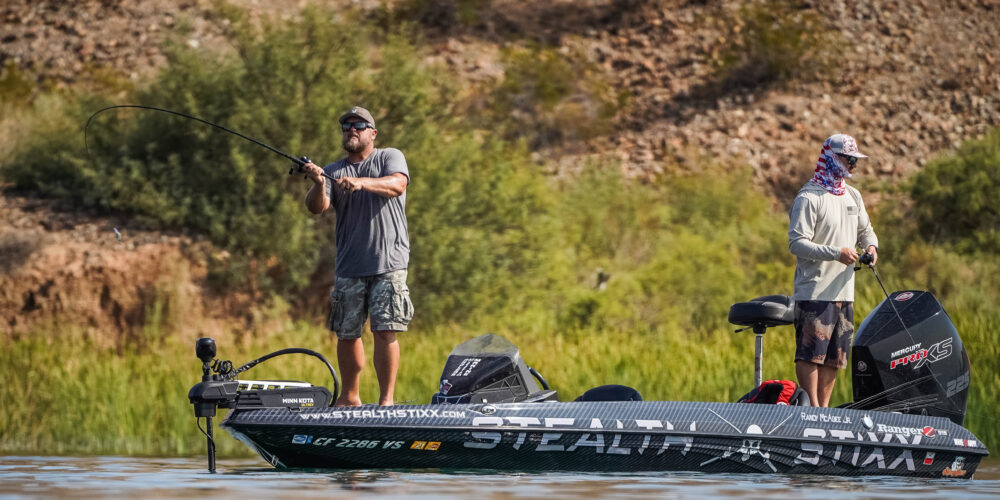 While the Top 10 anglers get to fish Saturday on Lake Havasu, only three really have a shot at the win unless something crazy happens.

Andrew Loberg, Mike Williams and Roy Hawk are set to battle it out on the final day of the Toyota Series Presented by A.R.E. Western Division finale. Amazingly, all three are fishing similarly, and even fishing near one another at times.

In fact, everyone in the top five is fishing similarly. It’s just a matter of who is getting the bigger bites and how.

Everything went better for Williams today … other than he didn’t have as much weight. Then again, one lost fish might’ve changed that.

The Day 1 leader didn’t get a bite for the first three hours on Thursday. Today, he had his first keeper by the time the sun had barely peeked above the mountains, and he had a limit early. Unfortunately, the spot he filled his limit, he lost what he feels is a giant.

“With the way I’m fishing, when you get a school fired up, the biggest fish always bites first,” says Williams. “Well, I lost that one, and then threw back in and caught my biggest fish of the day. So I’m pretty sure that first fish was bigger, which hurts a bit.”

Still, Williams came into this event with the sole goal of winning it, and he’s in position thanks to his offshore cranking bite. And he’s obviously around plenty of good fish, as his co-angler today, Kevin Gross, actually weighed in a bigger bag than he (17-15) did. It’s just all about timing, which Williams says he still doesn’t have dialed.

“Yesterday, I didn’t get bit for the first three hours,” says Williams. “Today, I caught them early. Then I hit a lull and caught them again at a different spot. So I still don’t know, but I never know. I just have to keep hitting my spots.”

The hard part about rotating his spots, Williams says, is the guy right behind him in the standings seems to be hitting many of the same ones.

It was definitely fun to see the Day 1 leader and the third-place pro fishing within 100 yards of each other this morning, and there’s little doubt they’ll be doing it again tomorrow.

Like Williams, Hawk is cranking the combination of grass and man-made structure. He says a certain depth zone has been key, as has an old, discontinued lure that he caught his biggest fish on today. But the crankbait has been his workhorse.

After getting an early limit, Hawk says he left his main stuff to save it and went looking for more.

“I found a lot of dead water,” says Hawk. “But I knew about a spot I wanted to check, and I did and got two good upgrades there and left.”

That made him pleased as he may have an added option for Saturday, but one thing that’s not changing is that crankbait in his hands.

“I’ll need one or two more 4-pounders to have an outside shot at the win, but I can definitely do that doing what I’m doing,” says Hawk.

After all, Williams did it yesterday.

At this point, Randy McAbee Jr. might as well sleep in tomorrow. Why?

“Because I don’t know what the fish are doing until that sun gets way up,” says McAbee.

On Day 1 he didn’t get a bite until 10 a.m., and today it wasn’t until 11 a.m. Fortunately, once he doesn’t start getting bites, he gets plenty of them on his milk run of 50 points.

“The fish just shrank today, because I caught more fish than yesterday,” says McAbee. “I didn’t change anything. Just grinding the lip off a crankbait along those specific points.

“So, I’m not changing anything tomorrow. It’s all I’ve got.”

Apparently, the Williams household is pretty stacked when it comes to fishing talent.

Mike is in second and in contention for the win, and younger brother Mark has put together some respectable bags to sit in fifth. But while some sibling teams share information, it doesn’t seem these did.

“Any random piece of cover no one is thinking to hit,” says Mark.

He figures he has 10 of those he’s rotating through, generating seven bites a day. Of course, those seven would have to be monsters tomorrow for him to catch his older brother. Then again, it doesn’t seem like he minds.