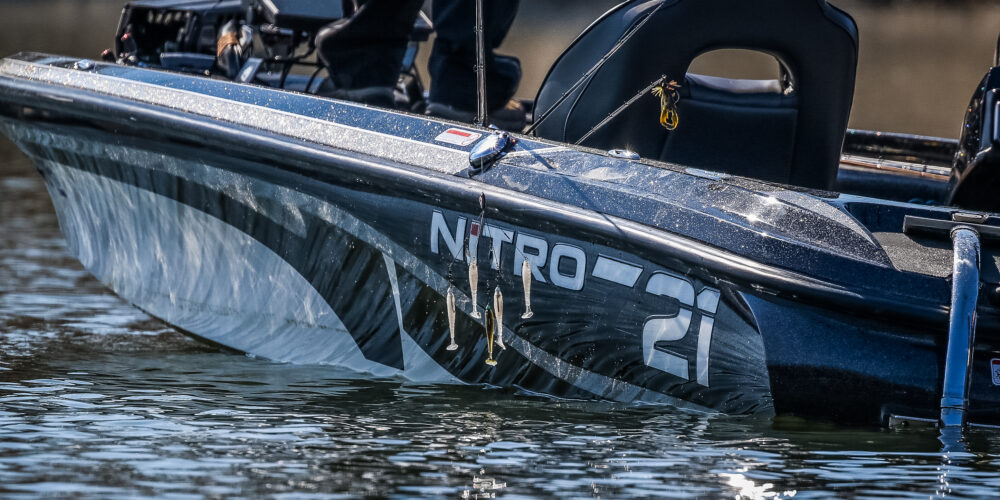 When the water is as cold as it is at the Toyota Series presented by A.R.E. Plains Division opener on Lake of the Ozarks (presented by Fenwick and hosted by the Tri-County Lodging Association), several tactics and patterns immediately come to mind: jerkbaits, jigs and Alabama rigs, all of which did the heavy lifting on Day 1.

Even though the weather is unseasonably cold, it’s March, and that collection of baits is always a factor this time of year. They’re no secret here, nor is forward-facing sonar or the rock and brush many anglers are targeting.

Here’s a breakdown of how the top pros trailing Harlin caught their fish on Day 1.

Bass Pro Tour pro Russ Lane brought in a solid limit weighing 19 pounds, 3 ounces and was thrilled to catch that much after a challenging practice.

“Practice was really tough,” Lane says. “I found an area that just looked right and decided to stay there and fish it all day today. It was pretty slow; I had seven bites all day.”

“I was fishing mid-depths and it all had to do with seeing them on my Garmin Panoptix LiveScope,” Lane admits. “I caught some on a Spro McStick jerkbait but also caught some around docks with a Buckeye Lures Pitch ‘N’ Skip jig with a Big Bite Baits YoDaddy Craw trailer.”

He was pleasantly surprised with his weight today and hopes to replicate his success on Day 2.

“I feel a lot better now than I did yesterday at this time,” Lane adds. “We’ll see what happens.”

Like the leader, Brock Reinkemeyer of Warsaw, Missouri, had no trouble finding willing fish. He estimates that he caught 15 bass to inch toward his first-day weight of 16 pounds, 15 ounces.

“I bounced around this morning trying to get a quick limit on a jerkbait a little deeper,” Reinkemeyer says. “As the sun got higher, we went shallower and started to load up on them.”

He says the key was fishing slow today and believes things will get better each day of the tournament.

“You have to fish slow to get a bite,” he says. “The water is still between 37 and 40 degrees where I’m fishing. I feel good about the rest of the week. It should keep getting better.”

Fourth-place pro Kirk Smith was around fish all day and estimates that he and his co-angler boated more than 20 bass between them.

“I probably had 12 or 13 keepers and my co-angler caught seven or eight,” Smith says. “It was all mid-range stuff and it was on several different baits. I caught some on an Alabama rig, some on a jig and some on a jerkbait.”

Unlike some anglers who are sharing water, Smith says he had his area all to himself in bringing in a limit worth 16 pounds, 4 ounces.

“I didn’t see other boats and didn’t see anyone else doing what I’m doing,” he says. “I feel good about tomorrow because the conditions should be way better for me.”

Oklahoma’s Stephen Whitesell was able to crack fifteen pounds with a limit weighing 15 pounds, four ounces to hold down fifth.

He says things are starting to move in the right direction on Lake of the Ozarks.

“I think the fish are just now starting to move up and come from out in deep water,” says Whitesell. “I am starting in the mainlake and working back in.”

Whitesell thinks the warming temperatures and sunny skies contributed to his success.

“I’m targeting those fish that are looking up at the sun,” he says. “I’m fishing a jerkbait and throwing an Alabama-Rig some. I feel pretty good about my chances of catching them again.”