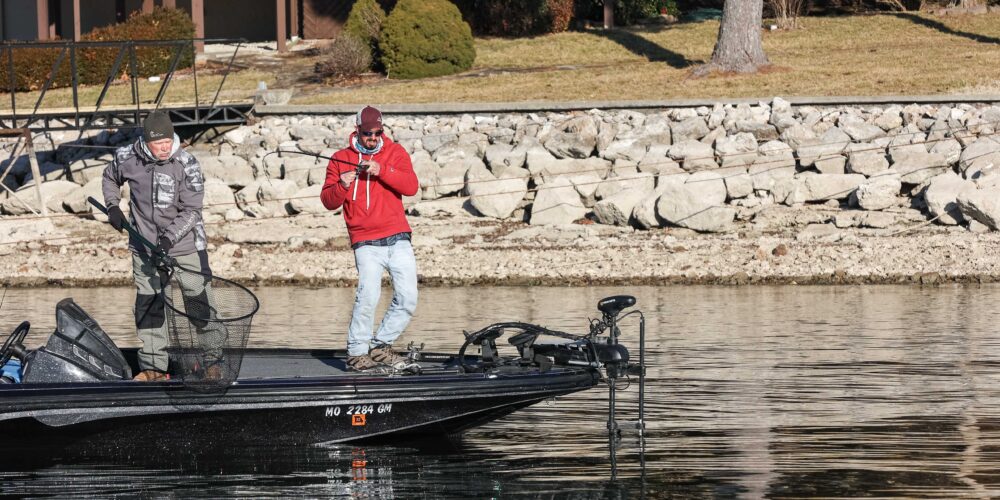 OSAGE BEACH, Mo. – After two days of competition in the Toyota Series Presented by A.R.E. event on Lake of the Ozarks it’s pretty clear that local knowledge or preliminary homework – or a combo of both – have been the keys to success.

Taking the lead on Day 2 of the event, which is presented by Smart Digital, local Brock Reinkemeyer dropped back-to-back 21-pound bags to now sit with a decent lead over the rest of the Top 25 with his eyes on the biggest win of his career. But with the talent competing in Thursday’s championship round of the Plains Division Presented by Outlaw Ordnance, no lead is safe, especially when bags in the upper-20s are more than possible.

Here’s a look at the rest of the top pros looking to capture their first Toyota Series win.

After leading Day 1, Justin Miller slipped a bit on Day 2 and weighed 18 pounds, 1 ounce to put him 3-2 off of Reinkemeyer’s pace, which on this lake is nothing to bat an eye at.

“The fish acted different for me today,” said Miller. “Ninety percent of what I’m fishing is either brush piles, or bigger, busted up rock. The fish on the rock were nonexistent and the fish in the piles weren’t moving around as much and they were much tighter to the piles.

“When you could fire a school up, you could get a couple to bite, but then they shut off. I think the pressure has a tremendous amount to do with that right now.”

In order to counter some angler pressure, Miller had to become more mobile than he wanted.

“I had to run more of my rotation today, hitting places multiple times to catch the fish I did,” he said. “Yesterday I sat down on ‘em and caught ‘em by 10:30, but today was a grind. My sixth keeper, and I only caught six, came at about 1:30 today. It was right there on the cusp of being not a great day today.”

Despite a tougher day, Miller knows he’s around quality fish, and with a smaller field tomorrow, he’s hopeful that he will get his fish to fire again.

“The fish are very wary and more scattered out than I’ve seen them,” said Miller. “For the last three weeks they’ve been in tighter groups and you could really pinpoint them. But they’re really scattered out now, except the ones that are in the heart of the piles. But I can’t get a jig bite, everything I’m doing is a jerkbait or an A-rig.

“With all the transducers clicking, with all the big motors running through, it throws them off their bite windows,” Miller explained. “On Lake of the Ozarks there’s definitely bite windows. It may be 10 o’clock, it may be 9 o’clock, and if you don’t have that rotation down you’re not going to catch them. So with the pressure it throws those windows off. But I think with less people tomorrow we have potential to see several big sacks and it’s going to take a load to close it out tomorrow.”

Travis Harriman may be the lone Arkansas pro in the top five, but he put his time in leading up to this tournament and it’s paying off. Weighing 15-9 on Day 1, Harriman dropped the biggest bag of the tournament today – 21-11 – to put himself in contention.

“Coming into this tournament, I knew this is how it was going to go down,” said Harriman of fishing brush piles with forward-facing sonar. “So I figured if someone was going to win it that way, I was going to spend the time and gas money coming up here and putting the pre-practice in to find as much brush as I could.

“I’ve only fished this lake maybe 10 times before this event, but I spent 30 hours idling around on weekends leading up to this.”

Doing what most of the other top pros are doing, though with one minor difference, Harriman didn’t change much between yesterday and today.

“I had the same amount of bites (on Day 2), probably 15 keepers, but I’m just running new brush every day,” said Harriman. “I think I’ve fished two brush piles, the same brush piles, yesterday and today. Otherwise, it’s all new brush and I just happened to hit a good rotation and hit spots that big ones were pulled up in.

“I think I culled a 2-pounder with a 6-pounder around 1 o’clock and then I just used Lowrance ActiveTarget for my co-angler the rest of the day.”

After two days of running fresh brush, the real question is how much gas does Harriman have left in the tank?

“I still have brush piles I haven’t touched in the first two days,” said Harriman. “The fish are moving shallower as this tournament goes on and I saw some stuff that I haven’t hit that I think should have fish on it, so we’re going to find out tomorrow.”

While Harriman got in a better rotation of spots today, Austin Culbertson didn’t. Still, he made his program work to cobble together 15-8 and remain in the hunt for the title.

“All winter long these fish pod up and as soon as it gets nice they just disappear, and that’s what’s happening,” said Culbertson. “All week it hasn’t been nice enough in practice for them to do anything, and of course, it changes during the tournament. I wish it was ice cold and a polar express came through. But that’s got to be a little bit and some of it has to be pressure, too.

“I can’t be everywhere at once, so I don’t know who’s hitting my piles, but sometimes I pull up and it looks like they have been scavenged.”

Both Reinkemeyer and Harriman have noted that the fish are moving away from deeper brush, and Culbertson has experienced that as well.

“It seems like the schools are dispersing,” said Culbertson. “I’m pulling up to piles and it’s like a ghost town. I’m probably hitting 100 piles in a day and right now I have five, instead of all 100 having schools. To think that 100 schools of fish just left is wild.”

With his fish leaving, Culbertson still knows what can happen fishing brush piles this time of year. So even though there may be big lulls between bites, believing the next big bite is just around the corner keeps him focused on the task at hand.

“Throughout the day you have to keep telling yourself you’re going to get that big bite,” he said. “I had a limit earlier today, but I could not find a big fish, but I kept telling myself to run enough of these piles and I’d run into one. I finally ran into a 4 and a high 3, which solidified my bag a little bit.

“What I’ve been doing is fishing piles on secondary [points] and now they’re not there. So maybe tomorrow I need to locate them on new stuff between the secondary [point] and the back of the pocket.”

When it comes to experience on Lake of the Ozarks, Mark Dunbar has plenty of it. Though, he’s taken a new approach to the lake this week than he’s used to.

“I probably have 150 waypoints (on the lower end) on structure, but I felt like I could only catch 10 pounds a day down there,” said Dunbar. “I changed my game plan and moved up and the first day I did I caught four that weighed 13. That sealed the deal for committing to going up.”

One of the few anglers in the Top 10 running up the lake, Dunbar is targeting places the fish first stage on before they go to spawn with an A-rig and a jerkbait. Another major difference in his pattern is how shallow he’s catching them.

“I got hung up on a point today and it was like 3 foot deep,” said Dunbar. “I popped the stick bait free and a 3-pounder eats it in front of me. That’s how shallow I’m catching them.”

The final day is set to see some more warm weather and sunshine, which Dunbar feels might make his bite even better.

“The fish are moving in and replenishing,” he said. “I have one main-lake point that’s on the inside of a bend. It’s the first pocket on that whole bend where they can come in and spawn. Every year they come to that point and it replenishes overnight.”