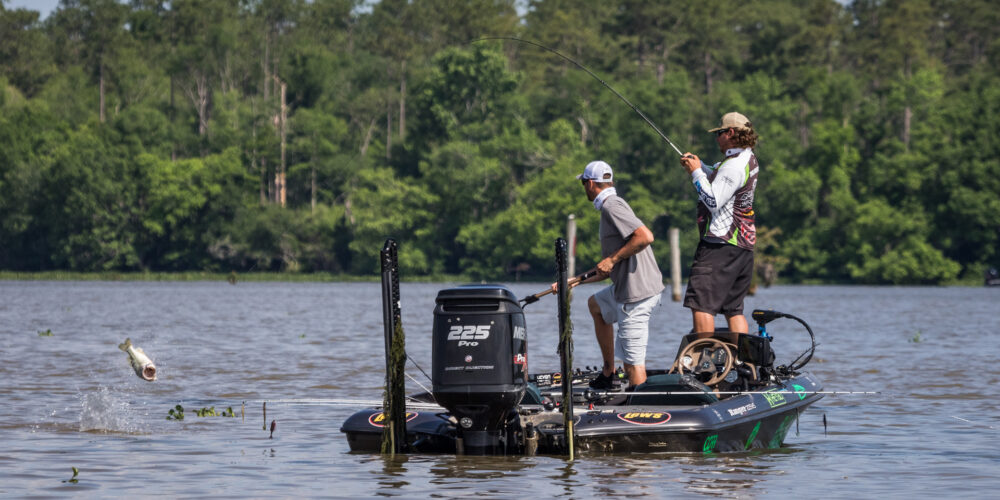 Though Spring Creek is substantially dirtier than usual, it’s still one of the biggest players this week for the Toyota Series Presented by A.R.E. Southern Division wrap up on Lake Seminole. From the mouth at the main lake to several miles up, the majority of the Top 10 pros are utilizing the historically productive creek to its fullest.

Leader Clint Brown is camping in one stretch of the creek throwing a vibrating jig around grass clumps. There are certainly some similarities within the top pros, but of course, others have blazed their own trial.

Here’s a snapshot of how the rest of the mostly local talent is getting it done.

Despite catching the biggest bag of the event so far on Day 1, DJ Ellis slid from first to second after Day 2.

Things started out much slower today for the local pro, though that didn’t come as a total shock.

“I think honestly the amount of pressure caused it,” Ellis says of other anglers fishing near his juice. “You have to get on the right line when you’re fishing these areas and when you have people constantly coming in and out to throw in the area it hurts it. I know the fish are there, I can see them. I just couldn’t get the line right.”

His primary spot consists of two grass lines with a patch of bare sand between them, so making specific casts is crucial. Tomorrow, he’s hopeful that the smaller field will give him more space to work with.

“Tomorrow, hopefully I’ll have more leeway as far as to how I can move around,” he says. “The quality of fish is there, it’s just a matter of getting them to bite. I’m going to give myself until noon or so and then check some other spots like it that I haven’t hit yet. I’m not going to really change anything up and hopefully it all pans out.”

Also setting up shop in Spring Creek, Nick Thliveros has his sights on Toyota Series win No. 2 – just like Brown. While many pros in the Top 10 have been carried by a giant bag one of the days, Thliveros has been scary consistent with limits of 19-11 and 21-3.

The morning bite was pretty stellar on Day 1 for a lot of the pros, however, today that wasn’t the case – for most. Thliveros was one of the few that capitalized on an early bite window and he’s excited to see what tomorrow brings.

“Yesterday I didn’t really know what I was on and it took me a little bit to figure it out,” Thliveros says. “Then I caught a 6-2 and said, ‘oh, I know what to do now.’

“I’m working one area and there’s been a bunch of weight caught near me, but I think I’m going to have it all to myself tomorrow, so I’m excited.”

Thliveros’ spot is fairly small. He estimates it to be a 50×20-yard stretch that he’s just making laps around. Precision is key, along with some patience.

“I’m being real methodical with my casts and how I approach it,” he adds. “In the morning I was nervous about how it was going to load up and it did this morning, so why wouldn’t it tomorrow?”

One reason the spot seems to be reloading is the abundance of bait and a shad spawn, though Thliveros isn’t paying much attention to it.

“I’m around the bait and they’re chewing,” he adds. “There’s a shad spawn going on where I’m at, but I’m ignoring it. I thought I was going to catch them off it at Harris, but it bit me in the butt. So, I’m not paying attention to it. I’m catching fish that are down deeper and not chasing bait.”

Even though Thliveros won the Toyota Series event on Lake Okeechobee in 2019, things haven’t been smooth sailing since. A Top 10, and possibly a win, this week means the world.

“Oh, to be in contention, I’m chomping at the bit,” he says. “It’s been two years of struggle. Since I won Okeechobee the last check I cut was the last tournament that year. This is the first check I’ve cut since then.

“Knowing I’ll have all of that area to myself tomorrow, it could be a real special day.”

One of the folks who fell victim to a slower day was Anthony Ford. Still, he posted 16 pounds to back up his 24-6 to remain in contention for the win.

“It was a lot slower day and I caught a few fish on moving baits early and that seemed like it shut off,” Ford says. “I went and slowed down and picked up three more. But all my fish came from the same general area as yesterday.”

Ford, like others in the Top 10, has been leaning on one area in Spring. Tomorrow, he may have to change it up.

“I’ll see how it goes tomorrow, and I know there’s a lot more in the area, I just haven’t fished it to prove it,” he says. “I may have to adjust somewhere.”

Similar to Ford, local hammer Matt Baty clawed his way to a decent limit on Day 2, but still has his sights on another Seminole win thanks to his Day 1 bag of 24-3.

“It was just tougher today and my fish are kind of evaporating so to speak,” Baty says. “They may still be there, but they’re just roaming around not feeding because the current is slowing down. Current is the primary thing to my pattern.

“I don’t think I’m going to start there in the morning, but I may go back there to see if the water starts moving. But I may just throw everybody a curveball tomorrow and run to something else current-based just to see if there’s some fish there.”

Even though Seminole is his home lake, Baty didn’t put much effort into practice. Instead, he counted on the influx of water to put fish where he wanted and it’s worked to a degree over the last two days.

“I didn’t do a lot of practice for this tournament just because the mud came in and I knew exactly what I was going to be doing,” he says. “I didn’t want to go to any of my places and touch my fish, so I kind of had to learn throughout the tournament what holes had fish and what holes didn’t.

“If the current will roll down through Spring Creek, I think I can go back to some of my places and catch them. There’s just zero current over there. Maybe tomorrow will be the day it starts coming out of the creek.”