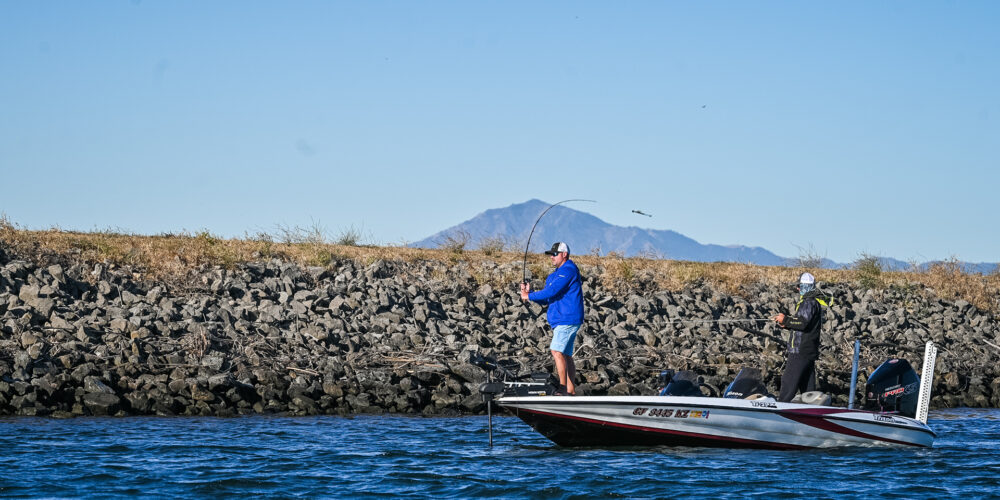 Day 2 of the Toyota Series Presented by A.R.E. Western Division event on the California Delta proved to be a challenge for many, as anglers attempted to piece together a transitionary bite with the tidal situation.

The puzzle seems to be falling into place for leader Michael Moreno, who was able to follow up his Day 1 total of 17 pounds with another 17-13 on Day 2. Adapting to the conditions and slowing down his approach was key to his second-day success.

Here’s how the rest of the leaderboard stacked up behind him.

Making the biggest wave on Day 2, Christian Ostrander crushed 25-14 to rocket into contention. After only weighing three fish for 8-8 on Day 1, he was able to surge into second place.

“All of my water didn’t pan out whatsoever yesterday,” Ostrander says. “I had three fish and lost two big ones yesterday. BIG ONES! I said ‘forget that water.’”

Looking to turn the tide in his favor, he went to new spots on Day 2 but stuck to the same strategy.

“I just went to a whole new area, where I knew there were some big ones,” Ostrander says. “I did the same thing today, I chattered, I threw Senkos and I punched.”

The six-hour tournament window was tough on other competitors, but it wasn’t a factor for Ostrander when it came to stacking up nearly a 26-pound bag.

“I’m making a long run, I don’t have much time to catch ‘em,” he says. “But today the short tournament didn’t matter. I could’ve weighed in at 10:00. If you’re around them you’ll catch them quick.”

With only 10 anglers left, Ostrander is positioned to win.

“I beat up on them pretty good today,” he says. “There’s potential to do it again – they’re there. It’s just a matter of flying a bait through their faces.”

Falling from first to third place, William Hume was able to scrap out a limit and keep himself firmly in the hunt.

“Today I started running more current with a ChatterBait and it seemed to be working,” Hume says. “I had a little flurry where they were eating a buzzbait pretty good, but the big ones weren’t there.”

Making the most of the falling tide was key for Hume, with many of his fish coming after 10:00.

“As soon as the tide dropped out and the weeds were visible, I was able to throw the buzzbait over the top of them and they’d come up and eat it,” Hume says.

Even though he’s sitting pretty in second, Hume can’t help but think about the ones he’s missed along the way.

“I’ve fished so terrible the past few days. I don’t know how many punch bites I’ve missed. I lost three ChatterBait fish today. I don’t even know how they came off,” he says. “With the water temp dropping they’re just not eating it right. It’s weird because in practice they were crushing it.”

While the frustrations may be mounting, Hume still has one more trick up his sleeve for the final day.

“I’m totally switching it up tomorrow,” he says. “I’ve been saving a spot, and hopefully it pays off. I’ve been letting it rest for three days.”

Andrew Loberg is keeping pace with the pack, falling to fourth place and coming in just a few ounces behind Hume.

“Day 2 was a lot different,” Loberg says. “I ran new water, but similar to stuff I fished yesterday.”

The new spots featured plenty of action, but not the size he was after.

“I caught a decent amount of fish, but never got a big bite,” Loberg says. “I don’t know what’s changing, but something is changing.”

Day 3 could be a challenge for Loberg, as his pattern hinges on the changing tidal conditions.

“I’m flipping, and the tide is going to be a lot higher tomorrow, so it will be a shorter day for me,” he says. “My pattern is all tide-related. We will have a lot more water in the morning.”

With only one day left, Loberg believes he has what it takes to roll with the punches and come out on top.

“The Delta is ever-changing,” he says. “You just have to adapt with it.”

Taking a small slide to fifth place is Jon Strelic, who was able to bring in 13-1 on Day 2 and retain his place in the Top 5.

“It was a lot slower today,” says Stelic. “I still got the same amount of bites, but the quality wasn’t there. I still caught a lot of bass, we had a good time.”

He made the move to a new location but stuck to many of the same strategies that helped him find success on Day 1.

“I ran some new water today,” Strelic says. “I fished a whole new spot this morning. It was good, I caught most of my weight there.”

His two-part pattern changes with the tidal transition, which has remained true over the first two days.

“I pretty much throw reaction baits all morning,” says Strelic. “As the tide slacks out, I switch over to the worm. I’ve been able to pitch around and catch a couple.”

Time will tell if his strategy pays off as the clock runs out.

“With a six-hour tournament it doesn’t give you a lot of time for fishing,” Strelic says. “You just go to what you know and hope for the best. We will see what I can do tomorrow.”