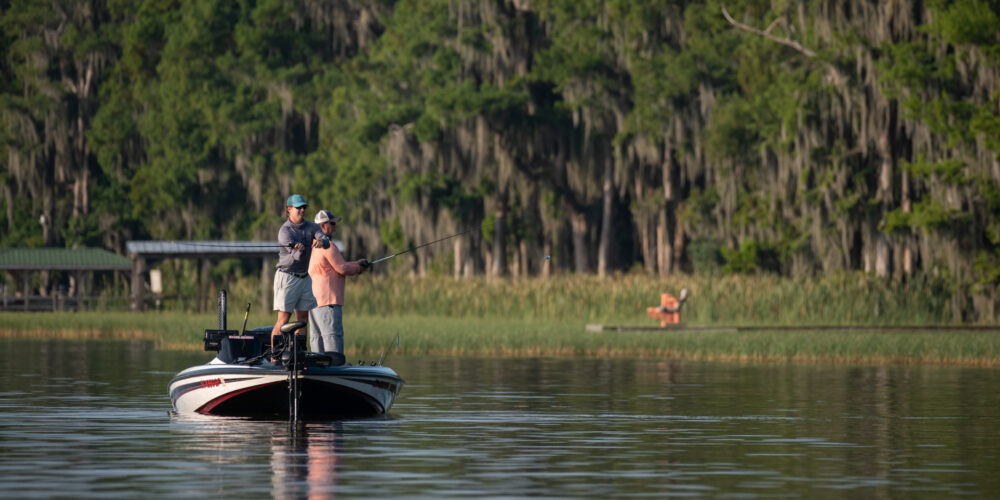 LEESBURG, Fla. – Before the start of the Toyota Series Presented by A.R.E. Southern Division event on the Harris Chain, all professed that the tournament would not be dominated in any one single lake or by one single technique. Instead, pros opined, top spots in the standings would be taken up with a variety of techniques. Indeed, that prophecy seems to be coming to fruition. Normally, when huge masses of hydrilla fill one lake or the other, the dominant patterns of tournaments revolve around those areas. This year, however, with the grass being so beat down in so many places, a variety of strategies are coming into play.

Tournament leader Nolan Gaskin has located a special area sweetened by a localized mix of hydrilla and pepper grass – but it’s a very small area. Others in the top five have resorted to everything from fishing in canals to offshore shell beds to bream beds across the various lakes in play.

While Jackson is more typically known for his pitching and punching prowess, he admitted that he had to move offshore this week to strike green gold.

“I’m straight out in the middle,” Jackson said. “I’m pretty sure it’s a bream bed deal because this afternoon my livewell had bream in it that had been spit up by the bass.”

Fishing in his first Toyota Series event as a pro, Andrew Ready of Auburndale, Florida, is off to a fantastic start on Day 1.

Though Ready caught some of his fish offshore with a jerkbait, it was his hunch to go into canals during the hottest part of the day that paid off handsomely.

“It’s something I do back home on the Winter Haven Chain,” Ready said. “Getting back in canals and skipping lures to shade in docks when it’s hot works pretty well. I had a feeling to go do that today and I caught several of my biggest fish doing it.”

Ready said one of the benefits of going the canal route in the heat of summer is, “Zero fishing company; I didn’t see anyone else fishing them today.”

In addition, he said the canals are full of hordes of little bream, perfect eating size for bass.

Florida veteran Val Osinski of Fort Lauderdale is finding himself right at home on the Harris Chain so far this week. Though everyone wants to fish in Florida in the wintertime, Osinski has always been a proponent of hot weather Florida bass fishing.

Today he dialed up a one-two punch of a Gambler Burner Worm over hydrilla and then a Gambler Ace fished over bream beds.

“In one lake, I’ve got one good, healthy hydrilla bed where I’m reeling a Burner Worm and then in another lake I have hundreds of yards of bream beds where I’m fishing the Ace,” Osinski said.

“That 360 lights them up like a Christmas tree,” he said. “You can tell which beds are more active, which just makes you more efficient with your presentations.”

Hunter Weston of Stuart, Florida, rounded out the top five with a 20-pound catch.

Weston has also dialed up a one-two punch that includes flipping Kissimmee grass with a Gambler Fat Ace and then winding a ChatterBait over eelgrass.

“I’ve found several places where the Kissimmee grass and the eelgrass blend together in a particular way,” Weston said. “When I find them set up together, there are usually some bass around – and big ones.

“I’ve found several places like this, but only fished a couple of them today,” he said.